600 educators from across the state hold large rally in support of public education at the Alabama Supreme Court. 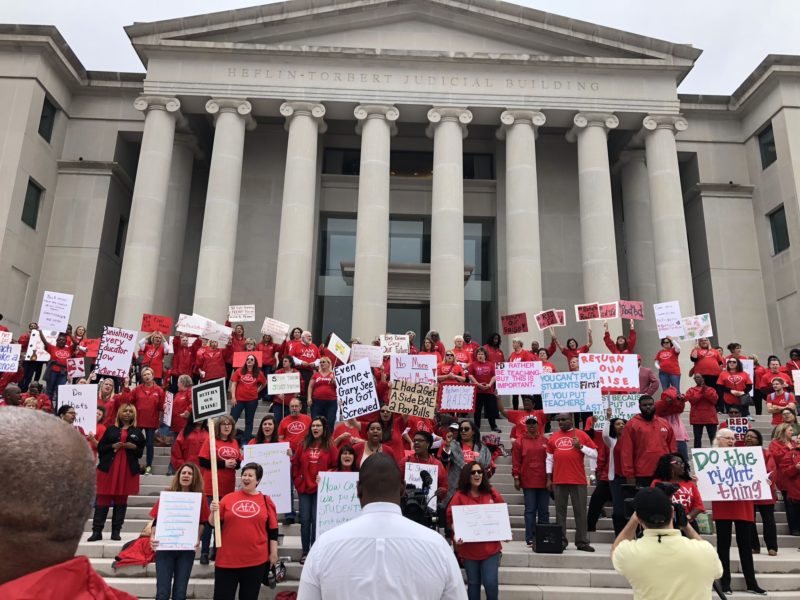 Wearing red jackets and waving signs that demand state officials #ReturnOurRaise, more than 600 Alabama educators traveled to the state capital on Wednesday for the largest-ever rally in support of public education at the Alabama Supreme Court.

The rally coincided with state Supreme Court testimony in the Alabama Education Association (AEA)’s lawsuit against the state’s public employee health insurance plan, known as PEEHIP. AEA leaders filed the suit two years ago over a secret meeting of the PEEHIP board, which took place in violation of the state’s open meetings law. Immediately after that secret meeting, the board voted to hike educators’ rates, which cost some Alabama educators every penny—and more—of the 4 percent salary bump that state legislators had just given them.

Last year, a circuit judge ruled in AEA’s favor, ordering PEEHIP to refund the $132 million that they took from educators’ paychecks. PEEHIP appealed, and the money has been sitting in an escrow account since then.

“For over two years now, in almost every conversation we’ve had with educators in the schools, this is at the top of their mind,” AEA President Sherry Tucker told the Alabama Political Reporter. “They are asking us what will be done, why did PEEHIP take their 4 percent raise and what can they do to help? Now, we’re asking educators to show the Alabama Supreme Court they won’t stand for being the subject of an illegal, secret meeting that took their first real pay raise in nearly a decade.”

On Wednesday, educators from every one of Alabama’s 67 counties answered the call and came to Montgomery, including busloads from Huntsville, Mobile, Fort Payne, and Birmingham. Meanwhile, thousands more teacher and education support professionals (ESP) who needed to stay home were wearing #RedForEd in support. Inside AEA headquarters, phones “buzzed off the hook” in support of Alabama’s #RedForEd moment.

“This is more than an educator pay or benefits issue,” AEA Assistant Executive Director Amy Marlowe told AL.com. At its heart, the AEA case is about the state insurance board’s obligation to meet and vote in the public’s eye.

According to NEA state rankings, Alabama teachers earned an average $50,391 in 2017, which put them at 35 th in the nation—but this doesn’t account for the hefty price that state educators pay for their health insurance. “When we received our ‘raise,” I actually brought home LESS!” wrote Khrista Walker, an Alabama paraprofessional on AEA’s Facebook page.

“Bills went up. Pay went down,” wrote librarian Crys Hodgens. “The ‘raise’ resulted in pushing us pushed down the economic ladder.”

The consequences are real for struggling educators and their families: “Bills got consolidated, vacations shortened or not taken at all, oil changes put on the back burner, etc…Besides making us feel the pinch, [it] also makes us feel very used and unappreciated,” wrote Mobile teacher Melissa Manning.

And it’s not just Alabama. Growing frustration with state-sanctioned neglect of public schools has fueled a national #RedForEd movement. It started last spring with a nine-day strike in West Virginia, and grew to encompass Arizona, Kentucky, Oklahoma, and other states. Public school educators and parents are fed up with bottom-of-the-barrel pay, taped-together textbooks, falling-down classroom ceilings, and legislators’ neglect.

A decision in AEA’s case isn’t expected for several months.