Joined by parents, students, state and local leaders, educators in all three states demanded the same thing: A real investment in public education. 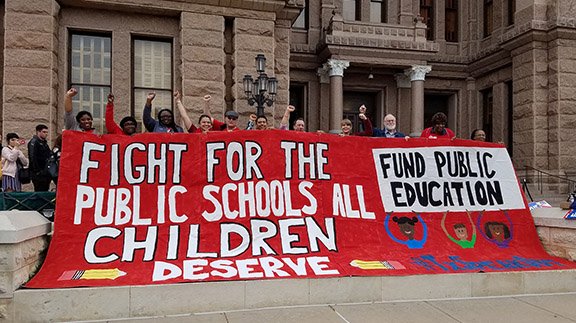 Over the past week, educators in Indiana, Maryland, and Texas put on their #RedForEd gear, gathered their creative signs and banners, and headed to their state capitols to march and rally for better school funding and improved educator pay.

Joined by parents, students, state and local leaders, and other public school supporters, educators in all three states demanded the same thing: A real investment in public education.

Well over 1,000 Indiana educators and other public school advocates gathered on Saturday at a rally hosted by the Indiana State Teachers Association, to ask lawmakers to invest in schools and raise teacher pay.

Inside the capitol building in Indianapolis, chants rang out: “You’ve left us no choice, you made us use our teacher voice!”

Although there were promising signs of movement on teacher pay earlier in the session, legislators have yet to move a significant proposal on the issue. So far, House lawmakers are clinging to a merit-based bonus system that is unfair to educators and could never take the place of the salary raise that educators deserve.

Educators, parents and students poured into the streets of Annapolis on Monday as part of March for Our Schools, organized by the Maryland State Education Association.

That legislation is the first step in implementing the recommendations of the Kirwan Commission, which found that Maryland’s public schools are underfunded by $2.9 billion per year.

“Elected officials have before them a Blueprint for Maryland’s Future,” said MSEA president Cheryl Bost from the rally stage. “Now is the time to pass it into law and deliver on the promise to our students here and to all students because our kids can’t wait.”

Roughly 6,000 thousand educators gathered at the state capitol on Monday, devoting a day of their spring break to rally for education funding and better pay.

Per student funding in Texas declined by 20 percent from 2008 to 2019, when adjusted for inflation. Teacher pay is more than $7,000 below the national average. Texas State Teachers Association (TSTA) president Noel Candelaria calls it a “sinkhole” created by the state legislature.

“Education funding is an emergency in Texas,” said Candelaria during a news conference ahead of the rally. “Thousands of effective teachers are leaving Texas classrooms each year because of the inadequate pay. Among those who remain, about 40 percent are taking extra jobs during the school year make ends meet for their families.”

TSTA is urging legislators to include all school employees by raising the pay of counselors, librarians, nurses, bus drivers, and other support staff. At the same time, the association is fighting a proposed “merit pay” system that connects teachers’ livelihood to high-stakes standardized tests.