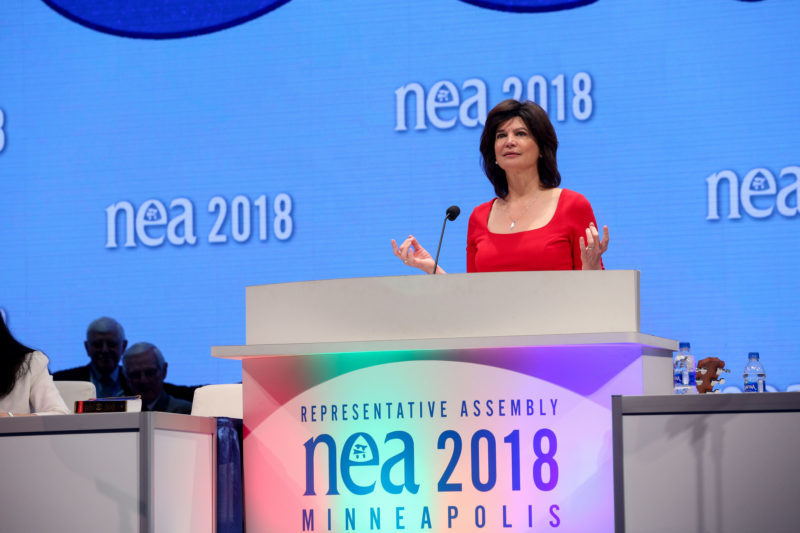 On the first day of the 2018 NEA Annual Meeting and Representative Assembly in Minneapolis, NEA President Lily Eskelsen García used her keynote address to stress the challenges facing educators and public school. While the climb ahead is steep, she assured the more than 6,000 delegates that a growing army of activists - educators, parents and students - are showing a way forward.

There is something different about this particular moment in our history, Eskelsen García said.  "Billionaires, like Betsy DeVos and the Koch brothers, have never been more embedded in political power. Billionaires are trumping the rights of working people to organize."

The recent Supreme Court ruling in  Janus v. American Federation of State, County and Municipal Employees,  a case bankrolled by corporate interests, dealt an undeniable blow to the ability of educators to come together and bargain collectively on behalf of students. But the assault isn't ending there.

Billionaires are not only selling out our public schools in favor of voucher schemes and unaccountable charter chains, but they are bolstering an administration that is pushing inhumane and unjust immigration policies.

The bottom line, said Eskelsen García, is that billionaires have placed themselves over ordinary people and are determined to escape blame from the escalating crises engulfing the nation. "

"They have no sense of servant leadership; Billionaires believe that they are our rulers ...They demand our silence. They demand we pretend. Instead of speaking out on racial injustice, they demand that we stand in silence and pretend that everything’s just fine."

"These are dark days, but Martin Luther King reminded us, “…only when it’s dark enough can you see the stars,” Eskelsen García said. "And we have seen true stars align. We have seen the people march and speak up and refuse to be silent and refuse pretend; we have seen the resistance rise?

In 2018, educators in West Virginia, Oklahoma, Kentucky, Colorado, Arizona and North Carolina have been speaking up and advocating for their students. They are speaking out against broken chairs, outdated textbooks that are duct taped together, mold on the ceilings, classrooms with more students than desks, and four-day school weeks.

"You spoke the powerful truth that we are fierce fighters who will stand up for ourselves and for our students and we will be heard!" Eskelsen Garcia told the cheering delegation.

"But I’m not sure that any shine brighter than our own fearless students," said Eskelsen Garcia, who, through their tireless and inspiring activism, have put lawmakers on notice that that they will not stand by and allow elected officials to fail them any longer.

In a first for the RA, Eskelsen García then yielded the RA stage to one of the most visible student leaders, David Hogg, recent Marjory Stoneman Douglas High School graduate.

"We have been speaking up, mobilizing, and standing strong because our friends and family mean the world to us," Hogg told the delegates. "We are young and that means we don't have to accept the status quo. And we never will. We intend to close the gap between the world as it is and what it should be." 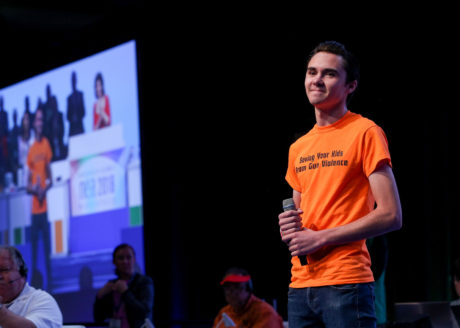 "We want our schools to be places for learning…where hands are raised for discussions and debates, not to show SWAT teams that we're unarmed."

Students across  the nation are ready and energized, Hogg continued, and they understand that they have the power. "They know that when they show up this time, the young people will win."

It's the passion in Hogg and the countless other young people who have taken up the call that should gave us all hope in these dark times, said Eskelsen Garcia.

Eskelsen García closed her speech by urging the delates to stay angry and motivated but not to resort to the destructive, polarizing tactics deployed by many of our opponents.