“These are our kids and we have a responsibility for them that goes beyond just transporting them safely to and from school," says Martha Alvarez.

School bus drivers Nancy Melin (left) and Ruth Ann Segovia help sort some of the thousands of socks donated as part of the Warm Toes Sock Drive in March 2016. The upcoming sock drive is set for November 14-18.

One morning last February, Martha Alvarez pulled out of the bus barn of Traverse City Area Public Schools in Northern Michigan as she’s done for almost two decades. It was 18 degrees outside.

“In cold weather like that, I get my students inside the bus as efficiently as possible, especially the little ones,” says Alvarez. When a kindergartener boarded the bus at one of the last stops, she was in tears. Her feet were cold, she told Alvarez.

“It was a Thursday,” says Alvarez, who sat the five-year-old girl near a heater and immediately noticed through a broken zipper in the child’s vinyl boots that she was not wearing socks. “It shook me up visibly, really bad.”

Alvarez instructed the girl to find her school’s lost-and-found box for a pair of socks, then telephoned the principal “so I knew she’d be taken care of.”

After parking her bus, she approached her supervisor, Tyson Burch, and asked if there was something she and the other drivers could do to help the child and her family.

Burch said: “What would you like us to do?”

“I couldn’t answer him, but I knew I was going to do something,” says Alvarez. “These are our kids and we have a responsibility for them that goes beyond just transporting them safely to and from school."

It didn’t matter why the kids didn’t have socks. Maybe it was due to poverty or neglect. What mattered was that they needed socks to stay healthy and be ready to learn” - Martha Alvarez

That day, Alvarez mentioned the kindergartener to other school staff and was shocked to learn that there were many students attending school without socks, or with mismatched or worn-out socks. On the drive back to school the next morning, Alvarez asked bus passengers if they needed warm socks. About six hands shot straight up on her first route with another six on her second route. She carries about 45 students on each route.

“That was it,” says Alvarez, a Michigan Education Association (MEA) and NEA board member and graduate of the Leaders for Tomorrow program sponsored by NEA’s Education Support Professional (ESP) Quality Department.

“If I’ve learned anything from my MEA and NEA leadership training, I’ve learned that you need to be part of the solution to help students,” she says. “It didn’t matter why the kids didn’t have socks. Maybe it was due to poverty or neglect. What mattered was that they needed socks to stay healthy and be ready to learn.”

Within a week, Alvarez conceived of the Warm Toes Sock Drive to generate donated socks for students. With assistance from fellow education support professionals (ESPs), she produced flyers and signs and sent them to local schools and businesses appealing for help.

“A week went by and I didn’t hear from anyone,” Alvarez says. “My husband and I bought socks for the little girl, and he wanted to buy her boots too, but that was it.”

Hertel recalls that Alvarez walked into the district’s communications office on a Monday and within 48 hours she and district staff members had created materials and a public relations plan for a weeklong sock drive to begin the following Monday (14th). 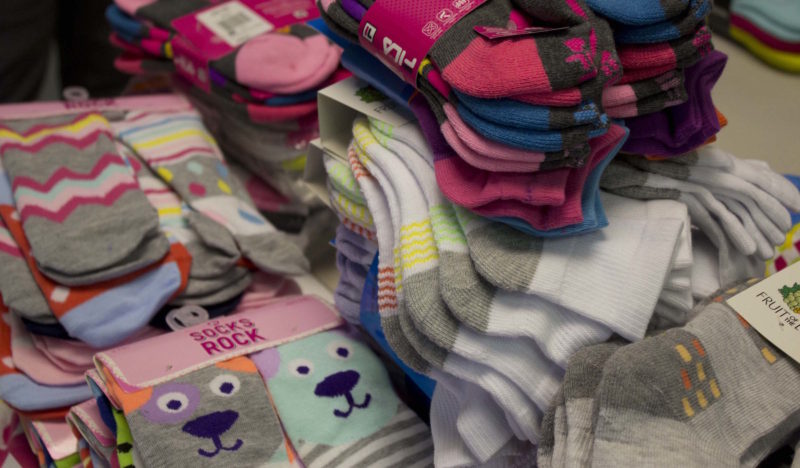 “Traverse City is a very generous community but we had no idea the outpouring of kindness and support that was to come to us the following week,” Hertel says. “It took off like wildfire. Not only did our student families donate, but we had numerous donations from community members and many area businesses.”

The 100-plus members of the Traverse City Transportation Association (TCTA) participated by donating funds and collecting socks from parents at bus stops. School offices and businesses displayed bins for visitors, customers and clients to drop off socks. After contacting MEA board member Connie Boylan, Alvarez garnered a $1,000 grant for the drive.

“I remember the day she called me,” says Boylan. “She’s so passionate about doing for others. And Michigan winters are very cold. We can’t have kids on buses without socks.”

Approximately 4,300 pairs of socks in all sizes and colors were collected between the 14th and 18th. Piles of socks were stacked on tables at a school administration building, then sorted and distributed to students with guidance from school district social service workers.

Ultimately, in a district of about 10,000 students where nearly 45 percent qualify for free and reduced lunches, there was still a need, Alvarez says.

This November 14-18 is the second weeklong drive in which organizers hope to gather socks and monetary donations for students before Winter 2017. A final drop of donated items is scheduled for the 19th at the TCTA craft show.

“We have expanded the opportunity for people to donate hats, gloves, and scarves as well,” says Hertel.

In October in Washington, D.C., Alvarez gained permission to display several sock bins in the lobby of NEA headquarters to create awareness among fellow NEA board members. Some socks and funds were donated too. NEA President Lily Eskelsen García is credited with donating the first pair of socks for the November drive.

“Lily said, ‘Be bold for our kids. Put your fears aside,’” Alvarez recalls. “The sock drive took me out of my comfort zone, but it’s been worth it.”

As with the first drive, organizers are planning to flood radio and television airwaves, and social media outlets with appeals for help. Alvarez expects to receive some publicity from public radio station WNMC where she has volunteered since 1994 as a disc jockey and where her husband, Leroy, is the blues music programmer and a DJ on Monday nights. Alvarez has a radio persona, Sasha D, whose Friday evening show, Blue-Soul, consists of rhythm-and-blues, Latin and gospel music selections.

“It is a true love of mine and helps keeps my eye on the prize ... life,” says Alvarez, who has also been an instructor. “I’ve been trained to take action by MEA, NEA and my other interests. The sock drive is a result of that.”
Donate to Warm Toes Sock Drive: November 14-18
Checks and money orders can be made out to Traverse City Transportation Association. Address mailing envelopes and packages to:
Ms. Martha Alvarez
TCAPS Transportation Department
1180 Cass Road
Traverse City, MI 49685
Donations are tax deductible