School bus driver shortages are everywhere. Temporary solutions highlight the need to pay regular drivers a living wage and give them the respect they deserve.
By: John Rosales
Share 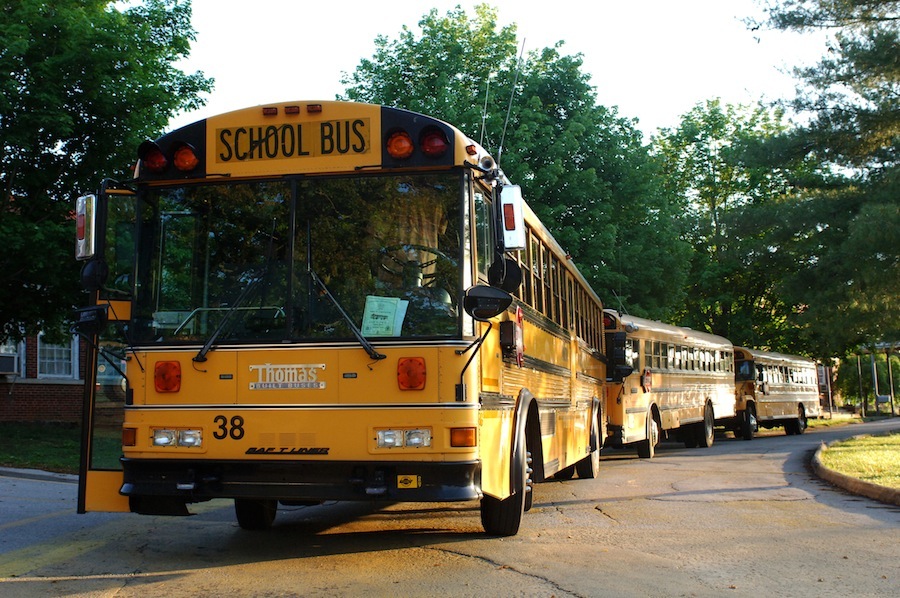 When a school bus driver calls in sick, someone has to pick up their route in a hurry. Students can't be left stranded. If a school district is short of backup drivers, other drivers end up running two routes, delaying pick-ups. Crowded buses and student tardiness is the result.

This is not unusual for school transportation departments across the nation. It’s the norm. At Parkside Middle School in Manassas, Va., about three of the school’s 31 drivers can be absent on any given day.

“When that happens, we have to ask some drivers to do double-runs,” says Laura Landis, a bus driver, trainer and recruiter for Prince William County Public Schools, where Parkside is located. “Sometimes, trainers will take the day’s run since we are licensed.”

With the need for more drivers to enlist at a moment’s notice, Parkside administrators and transportation service workers got together and decided to try a new approach: develop drivers from within. At a meeting last fall, they agreed to invite teachers to get licensed and start running routes. The bus gig for teachers would be voluntary and pay $18.50 an hour on top of their regular salary.

“Teachers will be assigned routes that allow them ample time to be in their classrooms before first bell,” says Landis, a member of the Prince William Education Association (PWEA).

The response by teachers was better than expected, according to Parkside Principal Mary Jane Boynton.

“The teachers I’ve spoken with see it as a win-win,” says Boynton, a member of PWEA, which includes 3,500 teachers, administrators, and education support professionals (ESP). “They get to build better relationships with their students, earn extra pay, and work closer with their colleagues in the transportation department.”

According to PWEA President Riley O’Casey, transportation service members welcomed the news about hiring, in a sense, substitute drivers to help alleviate the driver shortage, particularly when it comes to curtailing double-runs.

"Our regular drivers are not at all threatened by the new drivers," says O'Casey. "They welcome them."

However, O'Casey stresses that the new plan should be considered only a “Band-Aid solution.”

“The general idea is that we have a shortage of bus drivers,” she says. “We need to fix the all-around problem, which involves paying regular drivers a living wage and allowing them the respect they deserve."

O'Casey points out that administrators do not always communicate as well as they could when it comes to informing drivers about having to drive a second route and as well as other last-minute route changes. 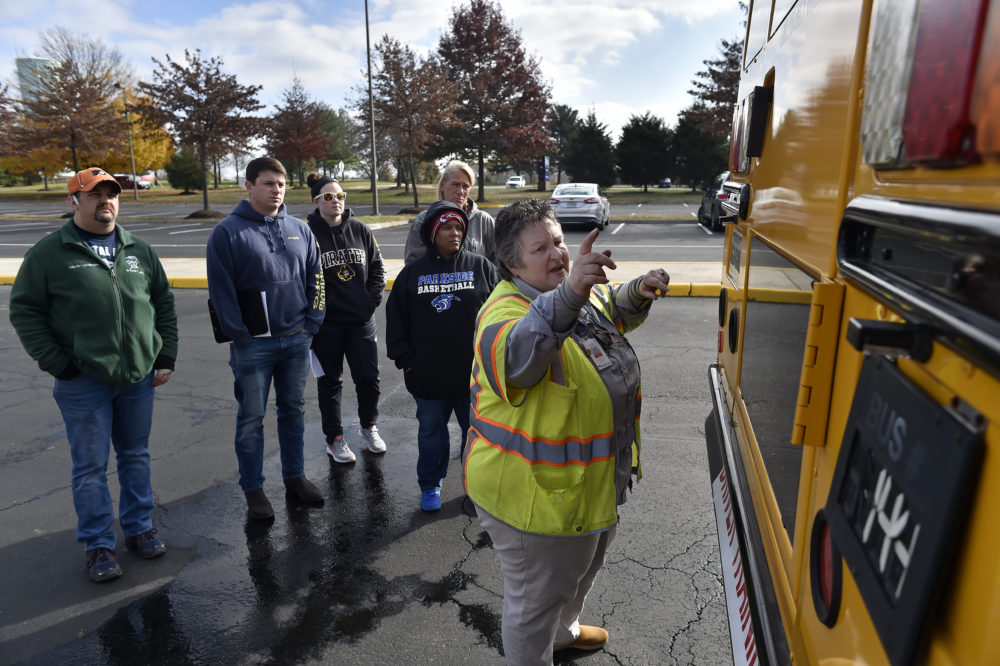 "There is a lack of communication coming from some officials that could be improved," she says. "Drivers having to do a double-run do not always get enough notice, which interferes with scheduled restroom breaks."

O'Casey recalls that some principals in the past did not allow bus drivers to use school restrooms.

"We are one team and our drivers need to be respected the same as everyone else," she says. "Now that teachers will be driving buses, they will see the level of responsibility that comes with the job."

School districts across the nation are reporting difficulties in recruiting and retaining school bus drivers, citing low pay, difficulty in attaining a commercial driver’s license (CDL), lack of available work hours, and too few benefits, according to the National Association for Pupil Transportation (NAPT).

“The whole nation is experiencing a shortage of school bus drivers,” said Diana Gulotta, an official with Prince William County Schools (PWCS). In an article published by the Prince William Times, Gulotta said “on any given day, we (county) can have up to 100 drivers out.”

Prince William County has a fleet of more than 900 buses serving nearly 100 schools and special needs students. The county employs about 700 drivers driving 4,500 routes that make 35,000 daily bus stops. As of November, the county was short 62 drivers, according to Gulotta.

Approximately 75 teachers from Parkside and nearby public schools picked up applications soon after the new driver plan was announced last semester. About a dozen teachers ended up submitting applications.

Currently, about a half dozen Parkside teachers along with several others from neighboring schools are at different stages in their training, which includes several weeks of classroom study covering defensive driving standards, student protocols, first aid care, bus inspection, and radio communications etiquette.

At some point, each teacher will take a test at the Department of Motor Vehicles to get a CDL learner’s permit so they can get behind the wheel of the bus for a probationary period under

the supervision of a trainer. Each trainee is required to drive a route for a designated number of hours with a trainer.

“We are very serious about our training process and student safety,” says Landis, a PWEA member who helps to conduct special Saturday and evening training sessions scheduled specifically for the teachers.

“Our bus trainers have done an excellent job of preparing teachers for the road,” says Boynton. “They developed flexible training schedules and made classes fun.” 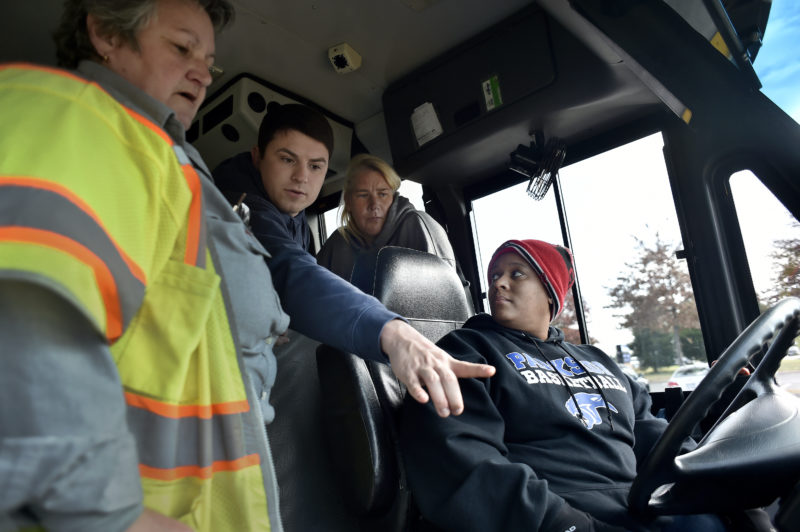 While no teacher has been assigned a route yet, Boynton says PWCS officials as well as those from other districts are keeping a watchful eye on the teacher-drivers.

“We developed the program from scratch,” she says. “From now to the end of the school year we’ll be working out the kinks and listening to feedback from staff, parents, and students.”

Boynton hopes to sign up more teachers during the summer in order to have at least 10 teachers behind the wheel in September for the start of the new school year.

After Parkside administrators and ESPs approved the plan, Boynton presented it to senior staff at the county level.

“They liked the idea and even agreed to pay for the training costs,” she says. “It’s a good example of teamwork … everyone working together to serve students and parents.”

Parkside is located between the City of Manassas and Manassas Park, a precarious area crisscrossed by busy byways. All 1,420 of the school’s sixth, seventh and eighth graders are transported by bus. The school currently operates 31 buses with 31 routes and 31 drivers, and is considered fully staffed, says Boynton.

“On some days we have zero absenteeism among drivers,” she says. “On bad days we have two or three drivers doing double routes.”

Driving a school bus is considered by most school districts as part-time work, which prevents drivers from collecting unemployment benefits if they get laid off or receiving the same employment benefits, like health insurance, of full-time workers. In addition, many districts require split morning and afternoon shifts for transportation workers, which precludes many drivers from working a second job for added income.

Although signing bonuses, increased pay and benefits, job fairs, advertising, and streamlining the hiring process have helped to retain and recruit drivers, most schools are experiencing some degree of driver shortages.

According to Associated Press (AP) reports, in Lincoln, Neb., some bus driver positions were unfilled even after a local school district offered $1,000 signing bonuses for new hires and a guaranteed six-hour day for all drivers.

In Iowa, the Southeast Polk Community School District relies on approximately 50 retirees and stay-at-home parents to transport roughly 3,400 students to and from school. According to AP, “there aren't as many retired farmers, a group that commonly took the job for extra income. Now, even with administrators and bus mechanics filling in, the shortage has also resulted in fewer routes, more children waiting at each stop, and crowded buses.”

In Minnesota, some St. Paul students are arriving late to school because fill-in drivers aren't familiar with the normal routes.

A school district in Ypsilanti, Mich., had to cancel a day of school last year because there weren't enough substitute drivers to cover for sick drivers.