Education support professionals in Waterford, Michigan, recently beat back a school privatization effort that would have cut 200 jobs. 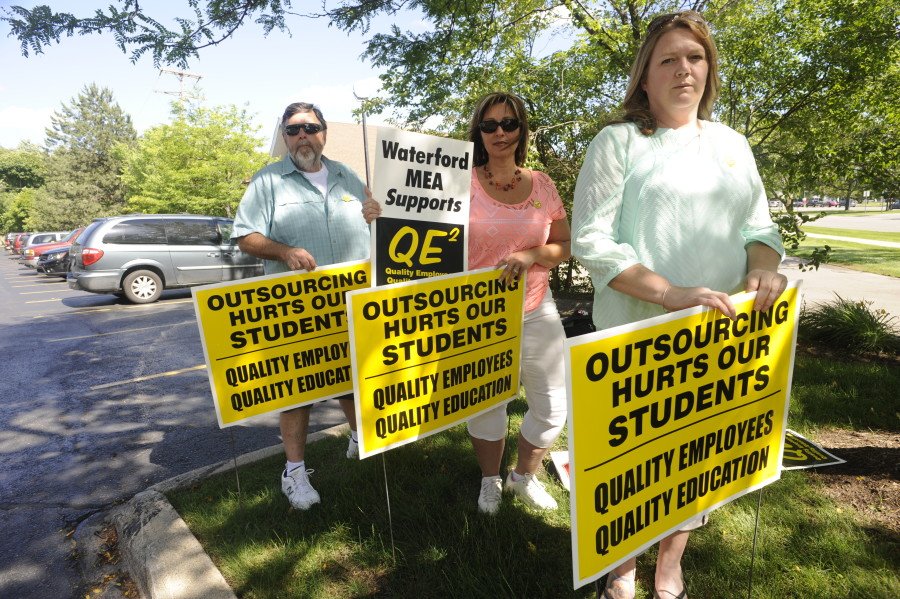 L-R: Drew Campbell, Teddie Watson, and Heather Madigan stand with signs used to gather support for their efforts. The MEA and supporters were successful in thwarting an attempt to outsource almost 200 ESP jobs in Waterford, Mich. Campbell and Madigan are both custodian engineers in the Waterford School District. Watson is a bus driver in the WSD. Photo taken on Tuesday, June 23, 2015, at the NEA local office in Bloomfield Hills, Mich. (Jose Juarez/Special to the NEA)
By: John Rosales
Share 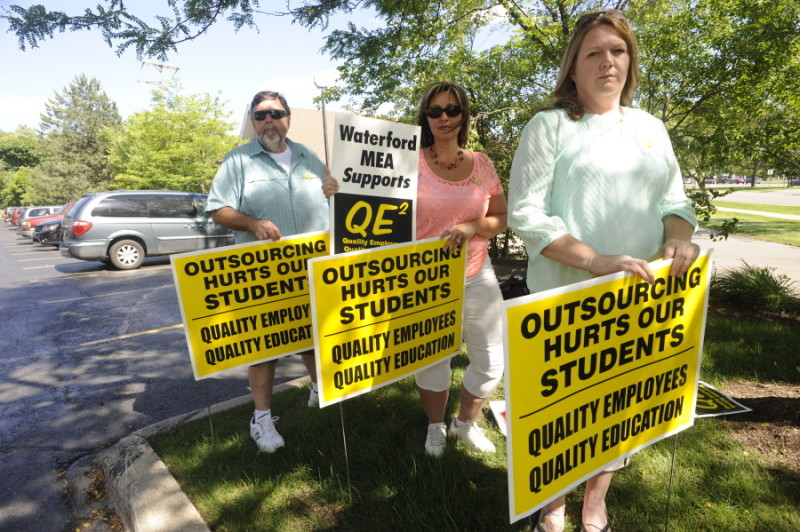 L-R: Drew Campbell, Teddie Watson, and Heather Madigan stand with signs used to gather support for their efforts. The MEA and supporters were successful in thwarting an attempt to outsource almost 200 ESP jobs in Waterford, Mich. (Jose Juarez/Special to the NEA)

Over the last several decades, Andrew Campbell has given many school board presentations, workshop trainings, and media interviews about the futility of privatizing public school services. Colleagues say that “privatization” is his signature word if not his middle name.

“I use that word a lot,” says Campbell, a custodian with the Waterford School District for 28 years and member of the Michigan Education Association (MEA) Statewide Anti-privatization (SWAP) Committee.

Last March, Campbell and two other SWAP members were conducting a typical training workshop in Bellaire, Michigan. It was titled, “Defending our Careers: How to Stop Privatization Through Coalition Building and Community Connections.”

“It was Friday the 13th,” Campbell recalls. “A colleague from Waterford (210 miles away) called to tell me that our superintendent had just announced in a private meeting that he was putting out bids to privatize almost 200 jobs.”

One of those jobs was Campbell’s.

Despite the bad omen and devastating news, Campbell knew that members of Waterford’s Michigan Education Support Personnel Association III (MESPA) could rally the community and beat back school privatization. Which they did, but it wasn’t easy.

Within 48 hours of hearing the news, executive committee members of MESPA III (custodians, maintenance/transportation and food service workers) got together and established the Waterford Education Support Professional (ESP) Crisis Committee.

Campbell was named chairman. Also present were MEA UniServ Director Marcy Felegy and Troy Beasley, president of the teacher’s Waterford Education Association (WEA). Since the school board was scheduled to vote on the school privatization issue at a May 21 board meeting, time was of essence.

“I was not going to lose my job without doing something about it,” says Heather Madigan, a custodial engineer at Beaumont Elementary School who volunteered to join the crisis team. “It was extremely helpful to have experienced people on the team. We got right to work.”

During this time, school district officials also pounced. They immediately began accepting bids from private companies to provide services for 187 school support jobs in transportation (67), custodial (65) and childcare services (41), and maintenance (14). In addition, officials announced that one transportation and two custodial supervisors were being released as of July 1.

“We hadn’t had a raise in seven years and have accepted many concessions over those years,” Campbell says. “Now this.”

At a March 21 membership meeting, members were briefed and asked to fill out surveys that included questions about years of service, education and training levels, residency, and social media activity.

“Almost 80 percent of our members spend their hard-earned money at local stores,” says Felegy. “They live, shop, and eat out in the same district where they work, which helps the economy.”

Waterford School District is the largest employer in town. Survey results also showed that ESPs volunteer with local community organizations and have worked as loyal employees in the district for decades.

“Parents have told me that their bus driver is considered part of the family,” says Felegy. “You can’t say the same about workers with private companies.”

At the membership meeting, a petition was started demanding that board members vote down privatization. More than 2,000 signatures were gathered within 30 days. Retired educators signed on with members of local police and firefighter unions, the Waterford Democratic Club, and other citizen-based groups. Small business owners were particularly responsive.

For the schools of Waterford, privatizing services means that trained, skilled and loyal ESPs would be replaced by workers with less experience, resulting in a lower quality of service. Even worse, students would be exposed to what Campbell calls “stranger danger.”

“Once you sign with a for-profit company, you lose control of who is working in our buildings and in direct contact with our children,” says Campbell, who works at Knudsen Elementary School. “Private companies do not want to spend the money or take the time to screen their new hires the way a school district does.”

The Waterford School District screens and fingerprints all prospective employees. Because of low wages and poor benefits, surveys show that the turnover rate among private sector workers reporting to schools is about six weeks.

“That means these companies cannot hire enough people to clean our buildings, work in our cafeterias, or drive our buses,” Campbell adds. “So, they start hiring less desirable workers and no one can do anything about it because the school district signed a contract.”

During April, the crisis committee had been meeting to review strategies. They were joined by organizers with the Michigan Federation of Teachers (MFT) and Waterford Federation of Support Personnel, the MFT local that represents childcare service workers.

With each passing day, the campaign picked up steam as more and more of MESPA’s 200 members started showing up to mail post cards to school board members, knock on doors informing neighbors about the services provided by career ESPs, and to send e-mails to school board and administration officials.

“You could not drive anywhere in Waterford without seeing a yard sign or some kind of support for our ESPs,” she says. “Even two board members displayed signs on their front lawns.”

By the next board meeting on April 16, the anti-privatization campaign was at a fever pitch.

“The meeting was packed,” Felegy says. “Community members spoke for several hours on the perils of privatization.”

Felegy says a common sentiment among the 25 guest speakers was evident: “Privatization is not welcome in Waterford.”

Still, the crisis committee did not relent. Plans were made to organize a large rally on May 7, two weeks before the vote. Print, broadcast, and social media news agencies were contacted. But after two marathon bargaining sessions on May 5 and 6, the rally was not needed.

“The day before the rally, we received a call from school district officials that they had accepted our proposal,” Campbell says.

While the agreement included a difficult pay cut, no jobs were lost to privateers.

“We were hopeful that we could work with the district to avoid outsourcing,” Felegy says. “It’s important for all of us to keep employees who put students first and are vested in the community.”