In many states, ballot measures may determine whether schools secure new funding or remain stuck in "permanent recession." 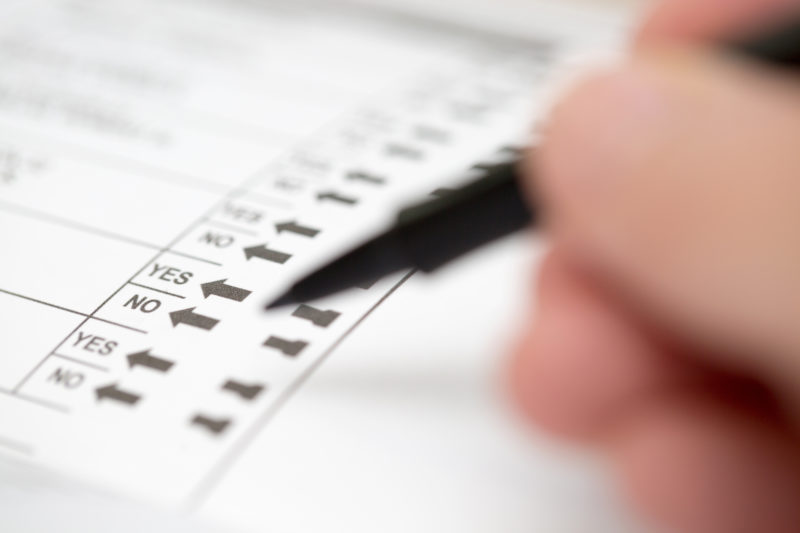 As voters head to the polls on Nov. 6, educators in Florida are going to be particularly eager to bring the Rick Scott era to a close. As governor, Scott kept the state's education funding to crippling lows and never came across a school privatization scheme - or a tax break for the state's wealthiest citizens - he didn't wholeheartedly champion.

The Florida Education Association is supporting Andrew Gillum, who has called for increased funding for public schools and a brake on the expansion of unaccountable charter schools. Electing Gillum - not to mention like-minded state legislators - is critical. But in 2018 that victory by itself may not be enough. Further down on the November ballot voters will also find a proposed state amendment that could potentially straightjacket any new plans to reinvest in public education.

It's called Amendment 5. If approved, it will require any new revenues for any purpose be approved by at least a 2/3 majority of legislators in each house. (Currently, the legislature needs a simple majority to pass any new taxes or fees or to increase existing ones). This supermajority threshold essentially empowers a small number of legislators to block budget proposals that invest in key public services, locking into place Rick Scott's legacy of austerity for public schools and tax breaks for corporations for decades to come. (Needless to say, Amendment 5 does not extend to efforts to further cut taxes for the wealthy.)

Amendment 5 would likely force even deeper education cuts in a state that already already ranks low on many education funding and performance measures. According to an analysis by the Florida Policy Institute (FPI), Florida ranks 47th in attracting and retaining effective teachers, 44th in high school graduation rates, and 42nd in spending per K-12 student.

The FPI report warns those rankings could dip even further in an economic downturn:

"The rising cost of competing priorities could shift support away from education. If a two-thirds majority cannot be reached, then local lawmakers would be forced to choose between raising local taxes or reducing support for schools and other local priorities."

As in Florida, the underfunding of public schools has taken center stage across the nation this campaign season. Educators are out in force, leading a #RedforEd movement to sweep pro-education candidates into office (there are 554 educators on the ballot this fall) and push an aggressive legislative agenda to reinvest in their students.

Elections aren't just about candidates. In many states, voters in 2018 may be determining the future of public school funding.  State ballot measures - the good, the bad and the ugly - have risen the stakes. 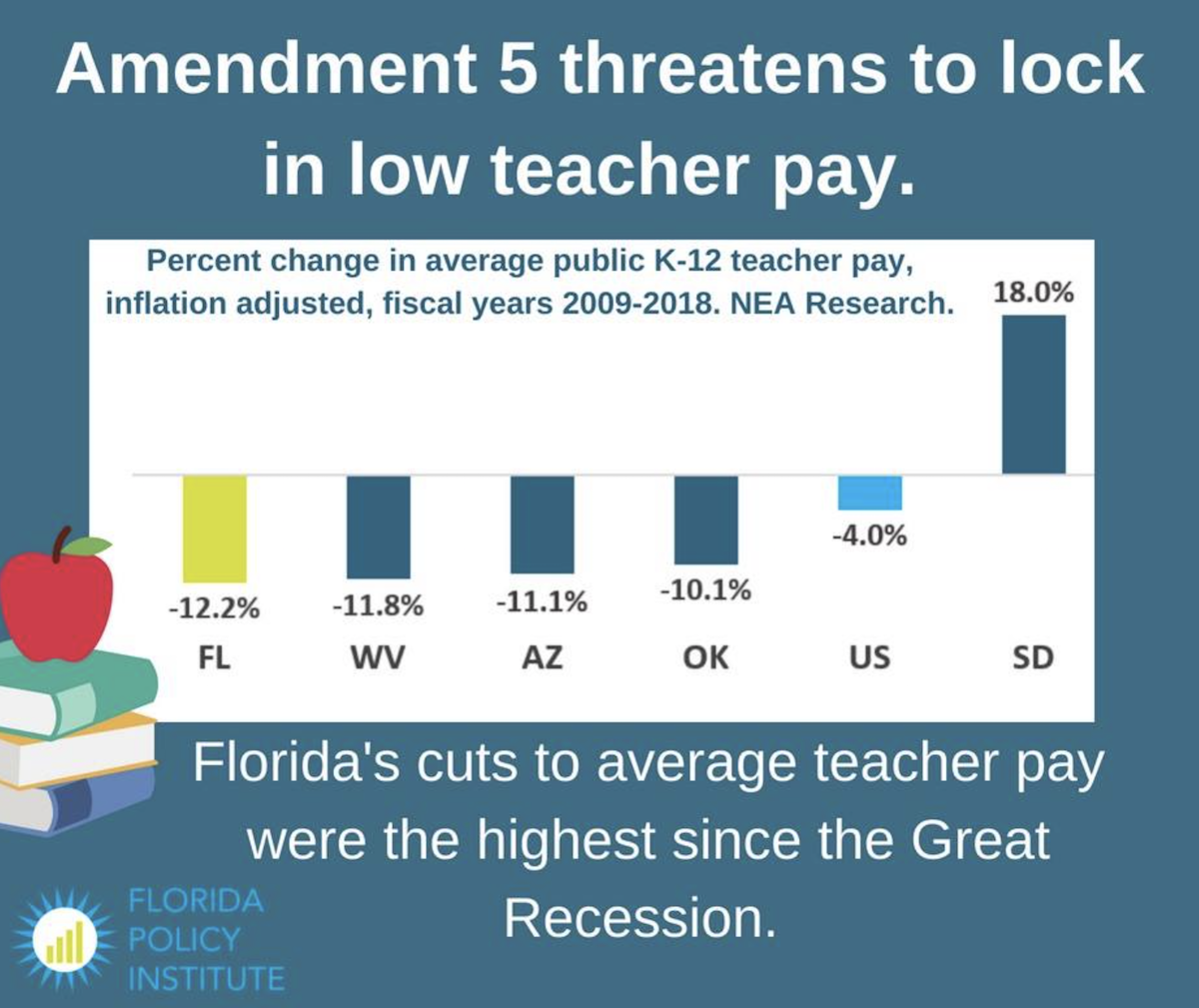 ‘Schools Cemented Into a Permanent Recession’

Florida isn't the only state where powerful interests are using ballot measures to choke off revenue streams for public services and secure tax breaks for the wealthy. A similar scheme is underway in North Carolina, another state another still reeling from decade of deep cuts to education.

Senate Bill 75 would cap the state income tax rate at 7% (a decrease from the current constitutionally-mandated 10%). Supporters like to call the proposal merely a way to protect taxpayers. What it is, says Mark Jewell, president of the North Carolina Association of Educators, is "a permanent tax cut for corporations and millionaires that will leave our schools starving."

According to estimates, an income tax cap would drain $3.5 million annually from the state's coffers, damaging any effort to make significant investments in public schools and students. Jewell says it would also force lawmakers to increase other taxes, such as property and sales taxes, which disproportionately burden working families.

A flexible income tax helped keep the state afloat in the previous two recessions.  According to the North Carolina Justice Center, "state policymakers enacted temporary top brackets on high-income taxpayers to raise revenue that minimized cuts to public schools, public health, and other investments that were important to the long-term well-being and economic success of the state."

Public education activists in North Carolina and Florida believe the experience of other states serve as cautionary tales. 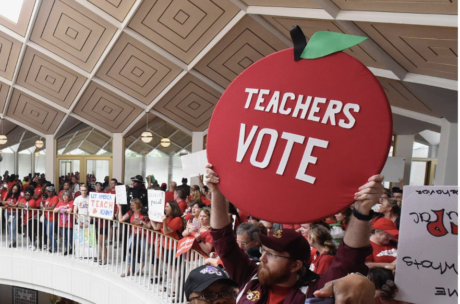 In November, voters in North Carolina will decide whether to cap the state's personal and corporate income tax rates at 7 percent. Mark Jewell of the North Carolina Association of Educators calls the proposal "a permanent tax cut for corporations and millionaires that will leave our schools starving." (Photo: NCAE)

Since 1992, Colorado's schools have been under the thumb of the so-called "Taxpayers Bill of Rights" (TABOR), a voter-approved referendum that drastically limited the amount of revenue governments could collect and spend.  Although lawmakers have loosened its restrictions, Colorado spends $2,000 less per student on average, compared with other states. Teacher pay is well below the national average, and schools are constantly struggling to fill their classrooms with qualified educators.

Colorado, meanwhile, has one of the fastest growing economies in the nation.

In June, activists delivered 175,000 signatures (significantly more than the required 100,000) to place Amendment 73 on the 2018 ballot. The amendment would raise $1.6 billion a year in additional revenue for Colorado’s public schools, bringing the state closer to the national average in school funding.

Getting a proposed constitutional amendment on the ballot is no easy task in Colorado. Activists had to collect signatures from at least 2 percent of voters in all 35 Colorado Senate districts, a new rule implemented in 2016 to make it more difficult to change the state's constitution.

In such a healthy economy, the state has run out of excuses not to bolster school funding. "It is up to all of us to get Amendment 73 passed by voters to ensure students and educators across Colorado have access to a high-quality public education no matter where they live," said Amie Baca-Oehlert, president of the Colorado Education Association.

Sharing the Growing Economy With Students

Educators in Hawaii and Utah are also determined to open new revenue streams for their students.

Utah educators are campaigning for Question 1, which asks voters to approve a small increase in the gas tax (costing the average driver only $4 a month), with 70 percent invested in public education and 30 percent to improve local roads.

If Question 1 is approved, it could generate more than $100 million in new funding for Utah schools, money that goes directly to classrooms and teacher salaries. "Question 1 is a once-in-a-lifetime opportunity," says Heidi Matthews, president of the Utah Education Association, which worked with community members across the state and the legislature to get the measure on this year's ballot.

Writing in the Salt Lake Tribune, Utah teachers Aaryn Birchell, Valerie Gates, Allison Riddle, and Gay Beck called attention to how the funding generated by Question 1 will empowers those who know their students best: 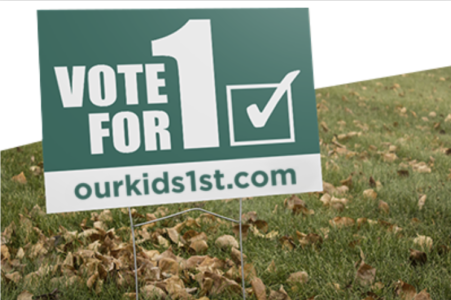 "Individual schools would create a plan detailing how their allocation will be invested to meet the needs of their students, while the school board verifies the funds are used only for academic purposes. This innovative approach allows each community to participate in how the funding is spent, measure what results are achieved, and ensure that funding isn’t used toward district administration or school construction."

Thanks to the efforts of the Hawaii State Teachers Association (HSTA), voters in the state will vote on a proposed amendment to the Hawaii Constitution that would permit the Legislature to place a “surcharge” on investment properties valued at more than $1 million, with revenue to be used to fund public education.

No state in the nation allocates a smaller percentage of both state and local revenue toward education than Hawaii.

“If the 1 percent want to call Hawaii home then they should be giving back — and that starts with paying their fair share to ensure our children get the quality education they deserve,” said Corey Rosenlee, HSTA president.

"Every year we say education is a priority," he added. "But we don't do enough to improve chronic underfunding of public education while Hawaii's children are falling behind and schools struggle to prepare students for 21st-century jobs."