One year after Parkland, it's time to stop talking about arming educators and fortifying our schools, and focus on proven strategies that will protect students. 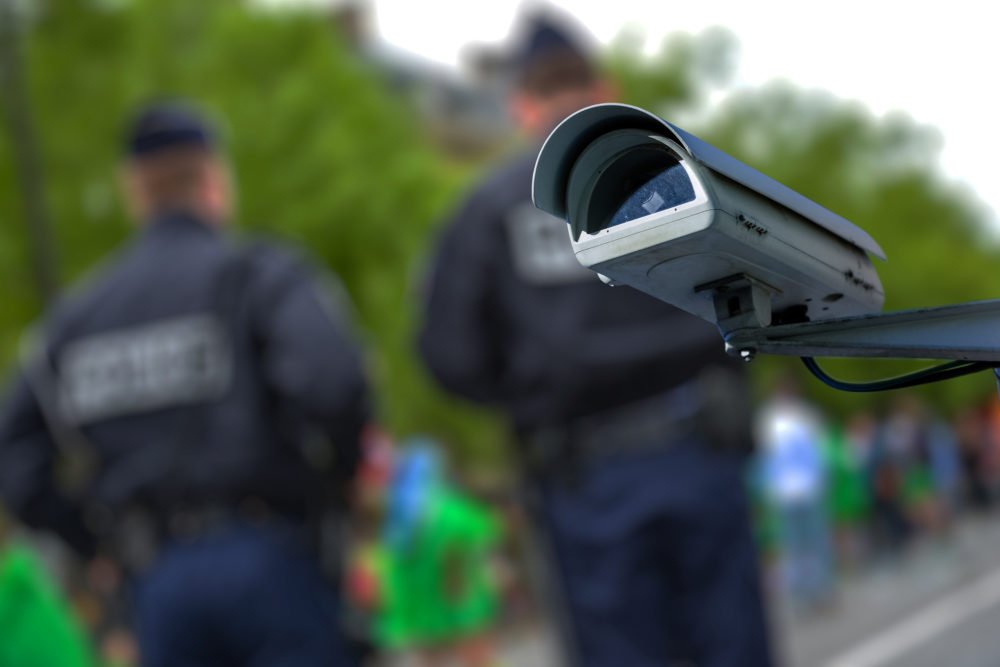 It may be no surprise that 2018 was the worst year on record for school shootings. According to federal data, there were 94 gun incidents at U.S. schools last year. That’s an increase of almost 60% over the previous high, recorded in 2006.

One of those incidents of course was the horrific shooting on Feb. 14, 2018 at Marjory Stoneman Douglas High School in Parkland, Florida, that killed 17 students and staff members. This attack - and the many school shootings that followed -  galvanized a long-dormant national debate over gun violence. Students  mobilized across the country, demanding elected officials step up and fix the nation's lax gun laws.

While the debate over access to firearms dominated headlines, the discussion over how to create safer schools has addressed a number of issues, including school climate, the scarcity of mental health services, threat assessment, the role of school resource officers, and professional development for school staff.

Something else, however, has been happening on the ground in a growing number of districts. It's the proverbial "Quick Fix,"  in the form of millions of dollars allocated to “target harden” schools. Eager to demonstrate decisive, quick action to understandably anxious parents, officials have purchased products ranging from mega-expensive state-of-art surveillance technology, to metal detectors, facial recognition software, bullet-proof whiteboards, and fortified entries.

And according to an analysis by The Washington Post, more than 4.1 million students experienced at least one school lockdown in the 2017-2018 school year. While lockdowns are useful when planned and executed properly, experts warn that they can have a damaging psychological effect on younger children.

Kenneth Trump, a school safety expert, calls it the triumph of the “wow over the how.” And it comes with a cost beyond what is recorded on a district's bottom line.

“A skewed focus on target hardening neglects the time and resources needed to spend on professional development training, planning, behavioral and mental health intervention supports for students, and other best practices," Trump explains.

But research and experience consistently shows that a comprehensive approach is needed for school safety programs.

Students are demanding from the adults in the school system to keep them safe and to provide the resources and supports they need, says National Education Association Vice-President Becky Pringle, and "we can't be afraid to take all the issues on."

"It's absolutely essential that everyone is at the table talking because it's complex. And we have to attack it and solve it in a thoughtful and comprehensive way."

Marking the somber one-year anniversary of the Parkland school shooting this week, Pringle joined Randi Weingarten, president of the American Federation of Teachers (AFT), and John Feinblatt president of Everytown For Gun Safety in unveiling a new report that provides a policy blueprint to curb gun violence in schools and support safe and healthy learning environments.

The report identifies the need to increase mental health services and social emotional support in schools, and design focused intervention strategies that can be implemented by districts. 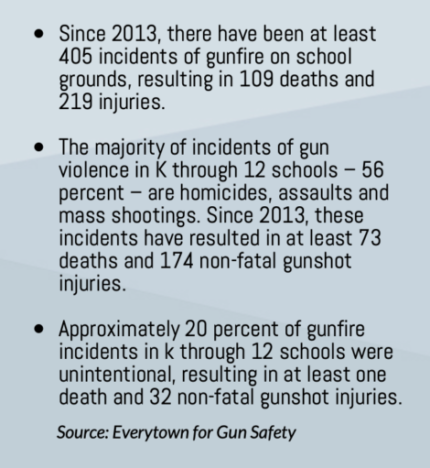 But preventing gun violence in schools  also requires a concerted effort to keep firearms out of the hands of  individuals who shouldn't have them in the first place. NEA, AFT and Everytown call for the passage of  "red flag" laws that allow families and law enforcement to intervene and temporarily restrict a person’s access to guns when it is evident they pose a threat to themselves or others.

"Red Flag laws are a proven tool," the report states, "and because they are drafted with strong due process protections, they enjoy strong bipartisan support." Currently, 13 states and the District of Columbia have these laws on the books and more are expected to follow suit in 2019.

The report also calls for passage of the Bipartisan Background Checks Bill which would require background checks for all guns sold as well as most transfers.

While improving physical security in schools is essential (specific recommendations in the report include installing internal locks and limiting the number of entry points), "we cannot convert our schools into prisons and treat our students like prisoners," said Pringle.

"We need to balance the improvement of the physical security of the schools without compromising our principles and our values around learning."

In many schools that balance has been obliterated by the school security industry, according to a recent investigation by the Associated Press. While educators, school leaders, and school safety experts are championing proven best practices, the $2.7 billion security industry is working overtime - with noticeable success -  to convince districts that sophisticated and expensive products and services are the answer to their problems.

According to AP, security firms in 2018 "helped Congress draft a law that committed $350 million to equipment and other school security over the next decade. Nearly 20 states have come up with another $50 million, ad local school districts are reworking budgets to find more money."

“School safety is the wild, wild West,” security consultant Mason Wooldridge told AP. “Any company can claim anything they want." 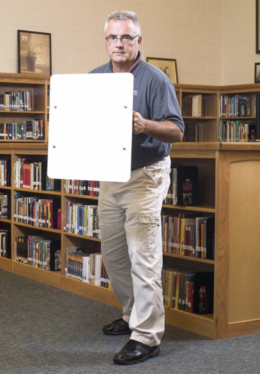 Bullet-proof whiteboards are just one of the many products security companies are selling to school districts.

"They have become increasingly organized in their lobbying of Congress and state governments. Their focus includes taking school security out of the hands of education agencies and put under the authority of homeland security departments, which, by their nature, tend of focus on the physical security measures and infrastructure hardening," Trump says.

According to available research, as a school safety strategy, target hardening doesn't work and is likely counterproductive. A new study out of Ohio State University finds that students and staff in schools that employ hi-tech security measures experience higher levels of fear. Furthermore, the authors could not point to any demonstrable gains in student safety through target-hardening - a startling conclusion given the immense financial costs associated with this approach.

“Instead of simply hardening schools against attack,” the researchers write, “educators should focus on building school environments characterized by mutual trust, active listening, respect for student voices and expression, cooperativeness, and caring relationships with and among students.”

Arming Educators - The Bad Idea That Hasn't Gone Away

Last year, the Florida Legislature considered a bill that would allow educators to carry firearms on school property. After considerable pushback from the public, the proposal was scaled back to cover certain trained school personnel, not classroom teachers.

One year later, the same lawmakers have revived the measure, and this time they may succeed. Legislative committees recently approved expanding the "guardian" program to include educators.  Doing so, Sen. Bill Montford warned,  would signal "a monumental change in public education. We are shifting the mission of public education from being one of teaching to being one of teaching and law enforcement.”

Sarah Lerner, a teacher at Marjory Stoneman Douglas in Parkland, believes armed educators would not have made any difference in reversing the horror her school experienced on Feb. 14 2018.

"There's nothing that a gun could have done in those six minutes .. a handgun would not have been any match for an AR-15, which is a weapon of war.  They're not equal."

And during a normal, run-of-the-mill school day, the risks are just too high.

"If the gun falls in the wrong hands, if you mistakenly shoot the wrong student who you think is armed and dangerous, if your gun goes off in class ... it is probably the most ridiculous solution I have heard," says Lerner.

'We Don't Need to Reinvent the Wheel'

While arming teachers and turning our schools into fortresses may be misguided knee-jerk responses to school violence, they haven't succeeded in completely overshadowing the more expansive strategies that focus on mental health, positive school climate and community partnerships.

The most effective programs pool resources, expertise, and training, making it easier to recognize when a student is troubled and requires help. Partnerships between schools and community organizations can facilitate connections and provide a continuum of preventative care services. 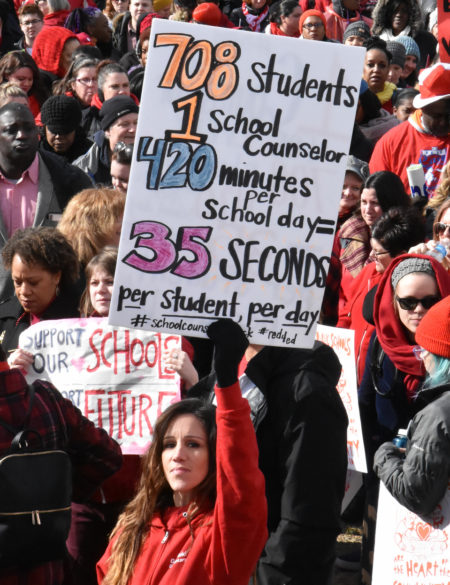 But districts, after more than a decade of budget cuts, have to replenish the ranks of school psychologists and counselors.  The counselor-to-student ratio has widened to exceed 1:700 in many states. (The American School Counselor Association recommends a minimum of one counselor for every 250 students.) #RedforEd protests have spotlighted this gap, with striking teachers in Los Angeles recently winning a concession from the district to bring the city's ration down to 1:500.

Communication and interaction between students, principals, teachers, school support staff, and their neighbors is a  pillar of the school safety strategy of the Radnor Township School District, profiled by NEA Today in 2017.

“A school can have the most sophisticated safety measures in place and still not be truly safe,” said David Wood, president of the Radnor Township Education Association. “We take pride in building trust in our students so they feel confident enough to come forward and tell an adult if they sense another student is struggling.”

Training staff to cultivate a trusting relationship with students, says Ken Trump, is the kind of straightforward best practice that, despite its success, hasn't been embedded in enough districts over the years.

"The most effective school safety strategies are less visible or even invisible when compared to trendy, quick-fix fads," he explains. "We do not need to reinvent the wheel. We simply need to implement and sustain the best practices consistently and in a balanced, comprehensive approach over time."