For the past four years, Trump and his Secretary of Education Betsy DeVos have touted ineffective and harmful voucher schemes. 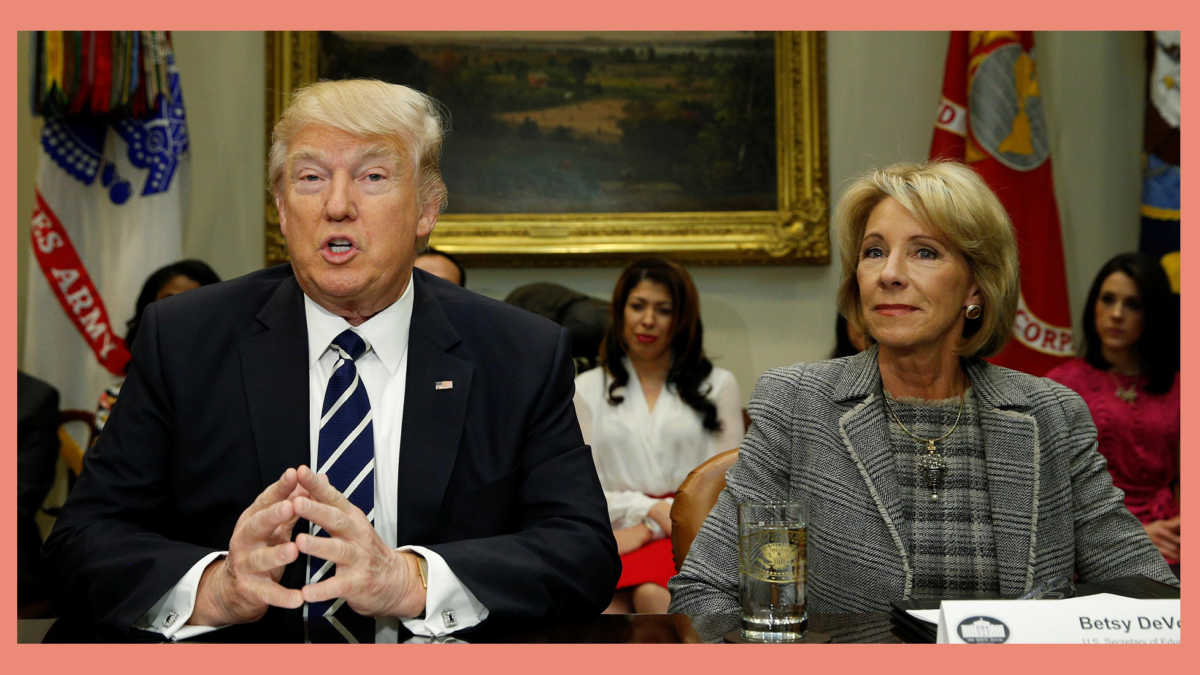 When listening to the rhetoric from the Trump administration, a single vision for our schools is presented: privatization. For the past four years, Trump and his Secretary of Education Betsy DeVos have touted ineffective and harmful voucher schemes, and attacked educators and educator unions, only putting more strain on our students. DeVos, however, has used her wealth from long before then, when she lived in Michigan and left schools in tatters with her voucher and for-profit charter schemes. Bringing her privatization agenda with her, DeVos now attempts to siphon off much needed funding from public schools to private institutions that only benefit a small group to the detriment of the 90 percent of our students who attend public schools. During a global pandemic and months of protests against racial injustice, her voucher proposals support racist institutions that only benefit wealthy, white Americans.

The historical origins of vouchers come out of a Virginia county shutting down its public schools and opening white academies to avoid adhering to Brown v. Board of Education. It should escape no one’s attention that vouchers all too frequently have been used to further segregation and promote discrimination. Given their attempt to wrap their privatization initiative(s) in the rhetoric of civil rights, it is evident that the Trump administration understands that history and they are using it to further their agenda to drain funding from public schools.

DeVos and this administration have used the coronavirus pandemic to further their profit driven agenda by funneling relief funds from public schools to wealthy private schools, and advocate for a $5 billion voucher program in the next COVID-19 relief package, DeVos has shown all of her cards. She has proven that she only cares about some students and parents, not those who need public education, but those who can fund her pet projects. The proposal came on the anniversary date of the Civil Rights Act of 1964, a reminder that this administration never understands the history of civil rights in America.

Following the Supreme Court ruling in 1954, states such as Virginia began to cut funding to public schools that integrated students, created rules that allowed counties to abruptly close schools, or decided not to levy local taxes for schools. In 1959, Prince Edward County chose to close its entire public school system rather than operate integrated schools, later adopting a “tuition grant program”, aka vouchers, for white students to attend private schools. This caused students of color, predominantly Black students, to be forced out of the education system all together. Using this model, more than 200 private “segregation academies” were set up in southern states by 1969, and tens of thousands of white students left public schools, causing a massive diversion of public funds to private schools. The fear that drove white parents to pay for private school for their children left communities of color without the resources to create the educational environment every student deserves.

Even today this practice is allowed to continue. During her May 2017 testimony before a House Appropriations subcommittee, DeVos was pressed about the exclusionary policies of voucher programs. Multiple times, she refused to say that she would step in to prevent private schools from discriminating against students based on race, gender, sexual orientation, or disability.

Betsy DeVos and her family have spent millions of dollars promoting education privatization schemes for the last three decades. Long before she became Secretary of Education, DeVos has used her family’s wealth, and her position as chair of the pro-voucher American Federation for Children to privatize public schools and fund politicians who support voucher schemes. In her home state of Michigan, DeVos is “one of the architects of Detroit’s charter school system,” one that downplays regulation and accountability while draining resources from public schools. Even some privatization advocates have described it as “one of the biggest school reform disasters in the country.”

DeVos should not be allowed to choke public schools and the students they serve by siphoning (or stealing) money away and shipping it to private and religious K-12 schools. Her voucher proposal reflects profit chasing, out of touch and uniformed thinking. In an attempt to appeal to communities of color, she fell flat in citing the nation’s historically black colleges as the “real pioneers” in her fight for “school choice” — seemingly unaware of the racist policies that prevented Black students out of other colleges and universities.

In response to the Trump administration’s latest push for vouchers, NEA President Becky Pringle pointed out that many voters see that “vouchers are a scheme to suck money out of public education and funnel it to wealthy people like our current Education Secretary Betsy DeVos.” She continued to say that when addressing an inequitable system furthered by voucher programs, it creates winners and losers. “Approaching the problem of inequity by creating options for just some families is exactly the wrong way.”

Since releasing his 2020 campaign platform for education, which included teaching “American exceptionalism”, Trump has fought against districts who embrace curriculum which include the history of racism and white supremacy in America. New York Times Reporter Nicole Hannah-Jones, a founder of the 1619 Project, which frames American history starting with the year when the first African slaves were brought to the United States, has been a frequent target of Trump in recent months. Hannah-Jones has contributed to the conversation of racism in private schools and voucher programs, writing in an article for the Atlantic, “White communities want neighborhood schools if their neighborhood school is white. If their neighborhood school is black, they want choice.” She continued, “Charter schools and magnet schools spring up in place of neighborhood schools, where white students can be in the majority.”

DeVos has tapped into something visceral among white parents who operate in an educational system that is now the most segregated since the Brown vs. Board decision. The language DeVos and Trump use to persuade communities to move toward private schools perpetuate racist stereotypes and deepen fear of our nation’s diversity.

We have a civic and moral responsibility to provide great public schools for every student in America. Improving public schools requires more money, not less, and public money should only be used to help public schools. However, states across the country continue to push racist voucher programs that unintentionally or otherwise segregate students, and cut off funding to schools where students of color are enrolled. In Indiana, 60 percent of voucher recipients come from white families, and the percentage of black students receiving vouchers has dropped to 12 percent. The Century Foundation also proved that voucher programs across the country benefit the most advantaged students eligible for their programs.

All students have a civil right to a public education free from discrimination. The Trump administration’s proposals will continue the long-residual effects of racism.

“It is appalling that [Betsy DeVos has] risked the lives of students and educators in running roughshod over the CDC’s apolitical process for providing vital health guidance to the American people,” said Pringle, calling for DeVos to resign following New York Times reporting that political appointees overruled career scientists in issuing school reopening guidance. She asked, “How many students and educators will we lose to COVID-19 before this administration prioritizes science over partisan politics?” If reelected, this is what four more years of Donald Trump and Betsy DeVos would look like. Four more years of DeVos forcing taxpayers to be complicit in her crusade to fund discrimination through voucher schemes. Four more years of federal dollars reimbursing wealthy tax payers who fund private schools. Four more years of distortion of tax codes that only benefit a small group.

During the height of the coronavirus pandemic when our nation faces serious economic challenges, the last thing we need to do is divert money to vouchers for private/religious schools that are not accountable and pick and choose their students. A child’s opportunity for success should not be left to chance, and betting on receiving a private school voucher or even being able to afford tuition if you get one is a risky proposition with no assurances. Every child deserves a quality, well-equipped school where they can learn, be inspired, and thrive.