Schools in Transition: A Guide to Support Transgender Students in K-12

A school climate survey conducted by GLSEN finds that transgender students are far more likely than other students to avoid bathrooms because they feel uncomfortable or unsafe. 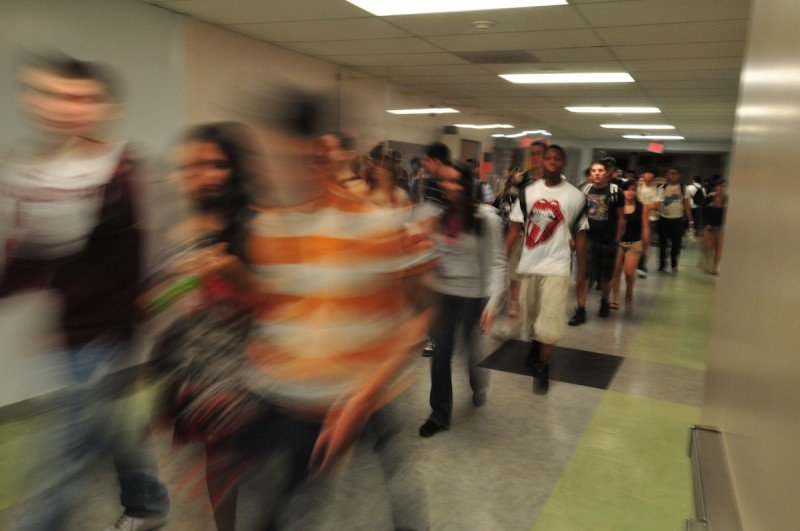 Most students are on autopilot when it comes to the daily routine of high school. They file into first period, go from class to class, banter in the hallway, eat lunch, and take the occasional bathroom break. The transitions are processes that for the most part require little thought.

For James van Kuilenburg, it’s slightly different, as one of those transitions could very well be the most important decision he will make that day. What’s at stake? His safety.

“I rarely use the male bathroom. It’s scary,” says van Kuilenburg, who came out as transgender in 2012. “There’s a lot of assault—and sexual assault—in bathrooms. This isn’t just in public spaces; this happens in schools, as well.”

A 2013 national school climate survey conducted by GLSEN identifies the rate of verbal and physical harassment by gender identity. The findings indicate that transgender students are far more likely than other students (63 percent vs. 40 percent) to avoid bathrooms because they feel uncomfortable or unsafe.

Common forms of harassment include confrontation about using a particular restroom, homophobic and transphobic insults, people attempting to look at them while in stalls, and physical assault.

When van Kuilenburg does go, he says, “It’s like a “life or death situation.” He’s analyzing everyone’s moves. He questions: “What’s the person next to me doing? If I walk in one direction, what could happen?”  If he fears for his life, he won’t go. This prevents him from being fully engaged in the classroom—half-listening to a lesson. It also leads to severe dehydration.  But his story is not all about school bathrooms. It’s about school climate and the role educators play in creating a safe and welcoming environment for all students.

Many advocates say that progress has been made, but more still needs to be done. Teachers, parents, and students need to be educated, as reports from around the country continue to show parents protesting schools for allowing students to use the bathroom that matches their gender identity, or, in extreme cases, parents are bullying children.

To help the school community, the National Center for Lesbian Rights (NCLR) and Gender Spectrum, along with HRC Foundation, the American Civil Liberties Union, and the National Education Association, recently produced Schools In Transition: A Guide for Supporting Transgender Students in K-12 Schools.

The guide is a roadmap for educators and parents to provide safe and supportive environments for all transgender students, offering practical advice, field-tested tips, and narratives of real experiences from students and educators. NEA President Lily Eskelesen García has hailed this first-of-its-kind resource as a lifesaver, as it comes at a time when schools are increasingly called upon to include and uphold transgender students.

“NEA is proud to be a co-author of Schools in Transition, a first-of-its kind guide to supporting transgender students in K-12 schools,” said García in a joint press release from partnering organizations. “This publication is an extremely valuable resource for the three million NEA members who work tirelessly to assure that their schools and classrooms are safe and welcoming for all students. And it will be a lifesaver for the increasing number of transgender students who are living as their authentic selves. Only when every school provides an inclusive, respectful environment can every student achieve their full potential.”

The lead co-authors—Asaf Orr, transgender youth staff attorney for NCLR, and Joel Baum, senior director of professional development and family services for Gender Spectrum—say there must be more conversation and awareness around this issue so every student can thrive. Baum states that “the guide is focused on transgender students but throughout the report we talk about how important it is to create gender-inclusive conditions for every child because all kids are impacted by some of the limitations we’ve imposed on them related to gender.” He adds, “If you wear the wrong clothes and someone makes fun of them—you become a target and there could be some real challenges.”

The information in the guide is presented in an easy-to-read framework, offering information on basic concepts, including definitions for gender-expansive, transgender, and gender nonconforming. It distinguishes between gender identity and sexual orientation, which, says Baum, can be often confused as having the same meaning. Overall, schools can use the guide to help create a more welcoming environment that will increase the safety, engagement, and inclusion of every student.

Orr hopes the guide will serve as a tool to help people better understand the issue and ease some of their concerns.

Three years ago, van Kuilenburg found himself sitting in the principal’s office of his West Virginia middle school. He was 12-years old and had just shared his gender identity with the principal. He recalls the principal saying, “I just Googled what this meant and I’m wondering what you want?”

The answers were easy. He wanted to live an honest life. He wanted to feel comfortable in his own skin. He no longer wanted to cringe and suffer when someone used the wrong pronoun or the name assigned to him at birth. He wanted acceptance. He wanted acknowledgment that he had changed in a positive way. He wanted his teachers to ask him how he was doing. He wanted to be treated like a human.

Coming out, however, didn’t improve his situation. He felt alienated. He knew some students and educators were talking about him. When harassed by peers, many adults would ignore the behavior, which left him feeling unprotected.

The GLSEN survey also reveals that 62 percent of the respondents who reported harassment and assault said school staff was unresponsive. Their research emphasizes that having school support is a critical component to the success of all students. And while most reported that they had one supportive school staff member, fewer respondents could identify 11 or more.

Van Kuilenburg’s “one” was a school counselor. She would approach him and ask if he needed to talk. “As soon as you have an adult on your side it validates you,” he shares.

Orr explains that people are hesitant to take on this issue because this is unchartered territory. “It’s not that they don’t want to do it. They don’t know how to respond...and they need tools to figure it out,” he says. When van Kuilenburg’s mom, Nicola, first spoke to the school administration, they informed her that they had no idea what to do. This resulted in a hastily prepared plan.

Around this time, Nicola crossed into Maryland to serve as UniServ director for the Maryland State Education Association, and she believes the vast majority of members are not transphobic or bigoted. She’s worked with several local leaders to include gender identity in their non-discrimination policy. This was received without fanfare and an increasing number of school boards across the country are following suit.  “They just need more information,” she says, emphasizing that the Schools in Transition guide has been helpful.

The resource includes guidelines for meeting the needs of transgender students, addressing issues like names, pronouns, and confidentiality; restroom and locker room access; sports; and harassment or bullying. It also outlines best practices for working with unsupportive parents. An overview of the legal landscape gives administrators, educators, parents, and students more awareness of the law, as they work to create safe and supportive school environments for all.

While the school experience in West Virginia was unpleasant, van Kuilenburg isn’t bitter about how the middle school handled his coming out. But he certainly would have felt better had the school staff been prepared with training.

Professional development is key in helping to create a more welcoming environment and helping students discover who they are in a respectful and inclusive manner. Otherwise, a transgender student will sit in silence. Author Orr states that “often times schools will say, ‘This is our first transgender kid,’ but we say this is the first one you know about.”

The van Kuilenburgs eventually moved to Maryland so Nicola could be closer to work. But this move also provided the teen with an opportunity to start fresh. Today, van Kuilenburg attends a high school where he is “stealth,” which means very few know he is transgender. There is no plan for him. He just goes to school everyday. “I walk around like any other students,” he says.

He is doing well, too, and is more involved in school activities. His teachers are nice and mindful, and he finds that people are more willing to learn. If a student makes an insensitive comment, teachers will pull him aside and ask if he’s okay. There are still some challenges to his school day, but for the most part, he says, “it’s a lot better.”

Baum understands how challenging this can be for schools and how challenging it can be initially to imagine taking this on, but schools can do this. “It’s consistent with what we’ve done all along as educators: to meet the needs of kids…and create better learning conditions where everyone feels safe and respected.”

Download the Schools in Transition guide to find the best way to support students.