The Secret of Sexual Assault in Schools

Student-on-student sexual assault and harassment happens with alarming frequency in school bathrooms, on school playgrounds, and in the backs of school buses.

In an Ohio high school last year, four boys forced a 14-year-old girl into a school storage closet and sexually assaulted her. In an Indiana middle school, six girls charged a classmate with groping their breasts and buttocks; choking, smacking, and slapping them.

Meanwhile, in a California elementary school, boys created a tradition of slapping and grabbing their female classmates’ buttocks, and called it “Slap Ass Fridays.”

It’s unnerving and uncomfortable to talk about, but student-on-student sexual assault and harassment happens with alarming frequency in school bathrooms, on school playgrounds, and in the backs of school buses. It’s happening at every level of education from preK to college.

It happened to Esther Warkov’s daughter, a student in Seattle public schools. In 2012, she was raped by a high school classmate—a boy who had previously been disciplined for sexual misconduct when he was in middle school—on a multi-day school field trip. The rape occurred in the presence of other students.

“Our schools are in crisis,” says Warkov, who founded the Stop Sexual Assault in Schools (SSAIS) organization which advocates for schools to protect students from harassment and assault and to investigate cases as required by law under Title IX.

Schools must take the initiative to eliminate sexual harassment and assault, first by acknowledging that these problems exist and then by tackling the problem in curriculum, policy, and the very fabric of school culture and community."

From 2011 to 2015, about 17,000 sexual assaults were committed by U.S. students, AP found,  although the number is likely much higher because assaults are under-reported or mislabeled as bullying, particularly among young victims. About 5 percent of the victims AP reported on were 5- and 6-year-olds.

The younger the victim, the more devastating the impact, and the greater the vulnerability to repeated assault. It’s a disturbing trend and one that some educators and parents are reluctant to acknowledge, especially when it involves kids so young. It’s easier to label the acts as bullying or hazing than to call them sex crimes—and violations of federal Title IX safety protections—but advocates say the only way to eliminate these offenses is to face them head on.

Otherwise, young lives will be destroyed, says Warkov. “Not only do the survivors’ emotional and psychological scars endure long after the attack, their social lives, education, and career dreams are shattered,” she says. “For some, the trauma is insurmountable; gender-based harassment and sexual assault have driven an increasing number of adolescent students to suicide,” Warkov adds.

The #metoo social media campaign is revealing a hidden truth: Sexual harassment and assault is a normalized, commonplace offense that occurs regularly in every facet of U.S. society—in Hollywood, in Silicon Valley, among journalists, comedians, politicians, and professors. Even the current President of the United States famously bragged about sexual harassment and assault, only to later dismiss his comments as “locker room talk.”

When it happens in schools and isn’t addressed, students learn that sexual misconduct is acceptable, even normal. After all, boys will be boys, right? But beliefs and attitudes about healthy relationships and sexuality take root early on in a student’s life and schools must take the initiative to eliminate sexual harassment and assault, educators say, first by acknowledging that these problems exist and then by tackling the problem in curriculum, policy, and the very fabric of school culture and community.

Get Out of My Bubble

These are the messages conveyed—and received—by some students in Jennifer Ryman Meuljic’s third-grade class in the Vancouver School District in Washington. Over time, these ideas translate to feelings of power and powerlessness, which can facilitate victimization by harassers and abusers. But third graders don’t understand any of this. What they do understand, however, is how to respect themselves and their space and how to speak up for themselves if someone gets in their space without their permission.

“We talk a lot about personal bubbles, or body space,” she says. “We talk about it when we’re lining up or sitting on the carpet, and we remind students that nobody is allowed into your bubble unless you invite them.” 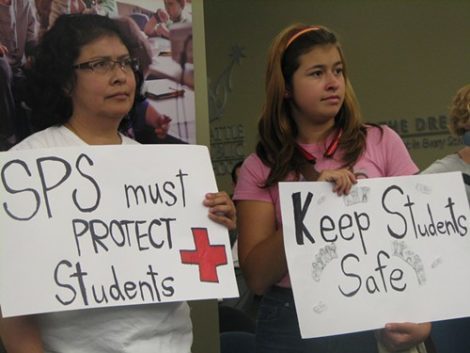 After community members raised awareness, Seattle Public Schools created a Task Force for the Prevention of and Response to Sexual Harassment and Sexual Assault.

Meuljic knows that kids like to touch and hug and that’s perfectly fine, as long as it’s welcome on both ends, so she and the other elementary teachers emphasize that everyone has their own personal space that is theirs to protect or share.

“If someone runs up to hug another student or hold their hand, I don’t discourage that, I just say, ‘Did you ask first if that’s OK?’ I teach them to respect and protect their own bubbles and also to respect others’ bubbles by asking if it’s OK to give a hug or sit close by.”

She also tells her students that if someone breaks into their bubble without their permission, they need to tell the person not to do that and to talk to an adult.

“My hope is that they always remember these lessons of protecting and respecting bubbles as they grow up and remember that they are the only ones in control of their bodies,” Meuljic says. “Maybe if we all could instill these ideas from the earliest ages we wouldn’t have so many people ignoring boundaries and exerting their power. I have to believe it will help.”

The Sooner, The Better

“Waiting until college is obviously too late,” says Fairfax, Va., high school teacher Robert Rigby, who helps lead his students’ Gay Straight Alliance. “Students want the information now, or even before high school, but definitely they want to learn about sexual harassment and assault and to explore topics like consent. They’ve said the sooner, the better.”

In response to student and community input, and the wave of news about sexual assaults on college campuses in recent years, Fairfax County Public Schools updated its family life education curriculum to include lessons on sexual consent and to dive more deeply into lessons on sexual assault. Under the Every Student Succeeds Act (ESSA), high schools must report how they are teaching students about safe relationships, including consent, but Elizabeth Payne, who oversees Fairfax County’s family life education curriculum, said Fairfax had decided to move forward with adding consent prior to the legislation.

“We were motivated more by the community need. Sexual assaults and harassment have been foremost on people’s minds,” she says. 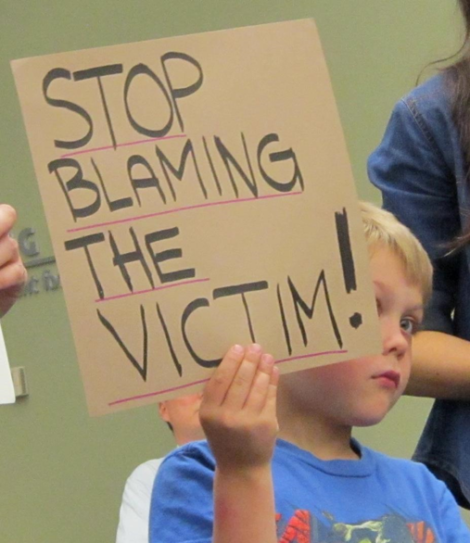 The curriculum, which begins in tenth grade and continues through twelfth grade, covers healthy and unhealthy relationships, definitions of sexual harassment, assault and rape, sex trafficking, and indicators of abuse among students.

Students explore the concept of consent and what it means to them. Can consent be given when the person is under the influence of alcohol or drugs? Can consent for one activity transfer to another form of sexual activity or future sexual activity? (Hint: No.) Sexual consent, students learn, is when a person clearly agrees to engage in sexual activity with another person. There can be no question about whether they agree and consent can’t be the result of intimidation or pressure. It’s not the victim’s fault if they are engaged in unwanted sexual activity while intoxicated, and it doesn’t matter how a person is dressed, or if they didn’t verbally say no. Silence is not consent.

A Culture of Respect and Responsibility

“We certainly hope students never experience these things but we want to give them the knowledge and skills to minimize their risk and to empower them,” Payne says. “Throughout the lessons we emphasize bystander intervention to help students be responsible for each other.”

For example, Fairfax teachers tell students: if you go to a party with a friend, always leave with that friend. Watch for conversations that look intense between two people, and try to intervene and pull one of them out of the situation or try to lighten the situation.

Waiting until college is obviously too late. Students want the information now, or even before high school, but definitely they want to learn about sexual harassment and assault and to explore topics like consent. They’ve said the sooner, the better.” -  Robert Rigby, high school teacher, Fairfax, Va.

Throughout the curriculum, Fairfax County students learn to examine their own values, morals, and ethics, and how those translate into being an “upstander” rather than a bystander.

If the classmates of Esther Warkov’s daughter learned about bystander intervention, it may have prevented her rape. Had her assailant had the same instruction, he might not have raped her.

More important than classroom curriculum, however, is creating a respectful, welcoming school culture where students feel safe and valued by educators, administrators and fellow students—where they respect themselves and each other. (NEA offers a wealth of resources on school climate at neatoday.org/safeschools and about social justice and activism at www.NEAEdJustice.org.)

“Arguably, creating a respectful school culture is more effective than classroom lessons alone in creating sustainable, positive changes in student attitudes and behavior,” says SSAIS co-founder Joel Levin, who points to a study that shows “classroom curriculum alone is not effective for reducing rates of sexual violence. It’s the school-wide component, including student-led campaigns and activities, that are effective in reducing rates of sexual harassment, peer sexual violence perpetration, and dating sexual violence.”

Levin, who is married to Warkov and shares the mission of preventing rapes and assaults like the one that happened to their daughter, also points out the importance of involving not just educators, but also students, families, school staff and administrators, and community-based organizations to reinforce messages of respect.

“If we respect our friends or our fellow students, we don’t treat them like objects for our own gratification,” Warkov says. “We need to be teaching students about rape culture and impulse control, not just about how to ask for sex, so that they might stop and think, ‘Hey, what the hell am I doing?"