Sen. Warren and Rep. Cummings To Students: Strike Back at Debt With People Power

As student debt nears $1.4 trillion in U.S., a Maryland educator explains the personal toll at a Howard University forum. 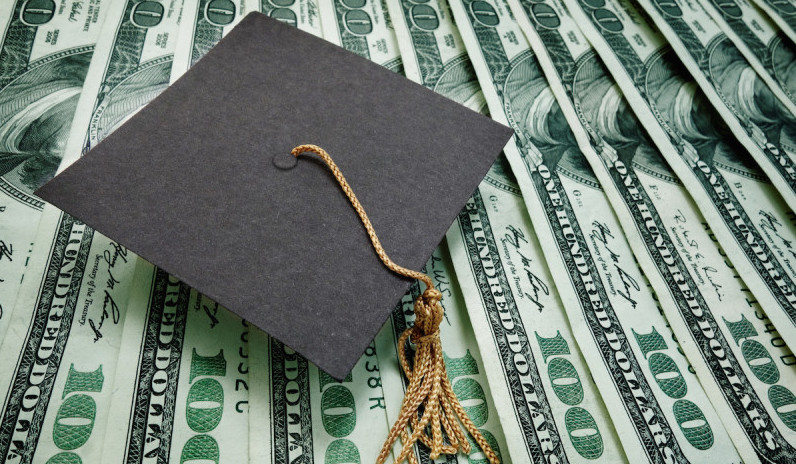 Second-grade teacher Latechia Mitchell dearly loves her job – but she may not have chosen it if she had known how difficult it would be to live with long-term student debt. She owes $60,000, she told U.S. Sen. Elizabeth Warren and Rep. Elijah Cummings this week.

“We live paycheck-to-paycheck to make ends meet,” said Mitchell, a Montgomery County, Maryland, teacher and mother of two. “We have not been able to save, pay for quality childcare or sports programs and summer camps for children… (and) we have postponed purchasing a more appropriately sized home for our family.

“These degrees have come at a steep cost. I am not sure if I had known how difficult it would be to pay back my loans on a public school teacher’s salary, I would have still chosen this career.”

Sen. Warren (D-MA) and Rep. Cummings (D-MD) hosted the forum as part of the Middle Class Prosperity Project, a collaborative effort to focus Congressional and public attention on the challenges faced by middle-class Americans. Monday’s forum, held at Howard University, a historically black college and university (HBCU) in Washington, D.C., looked specifically at the student debt crisis, with a special focus on the issues faced by HBCU students and students who attended for-profit colleges.

“I grew up in an America that invested in its kids. I worry that that America is slipping away,” Warren said Monday, noting that states have cut funding, Pell Grants no longer have the same buying power, and “exploding debt has crushed opportunity.”

It was three years ago this month when Americans’ collective student debt hit a whopping $1 trillion. Now nearly $1.3 trillion – and still climbing – many Americans are fed up with the stranglehold that debt has on their lives and on the national economy. More than 40 million owe for their education – for their ticket to the American Dream – and it’s impacting their ability to buy homes, start businesses, pay for their own children’s education, or even take a day off.

“The world closes up for those carrying debt,” Warren said.

NEA members believe strongly that every American, no matter family income, should have access to a high-quality, affordable higher education. In coalition with the work of other unions and groups like Generation Progress and the Center for American Progress, the NEA Degrees Not Debt campaign is striking back at debt.

Specifically, the campaign has called on lawmakers to enhance loan forgiveness for public servants (including all faculty at public colleges and universities); expand Pell Grants; increase aid to HBCUs and other minority-serving institutions; allow borrowers to refinance loans at lower interest rates; and restore state funding to public higher education.

“Consider this – if I was a bank, making hundreds of millions of dollars each year, traded on the New York Stock Exchange, my interest rate from the government would be anywhere from 0.13 percent to 3 percent. As a student with no job guaranteed, my federal interest on student loans ranges from 4 to 9 percent. How does that make sense?” Mitchell asked.

The setting of this week’s forum, Howard University, one of the most venerable HBCUs in the nation, wasn’t an accident. Although HBCUs produce 16 percent of the nation’s Black graduates and 30 percent of Black Ph.D. scientists and engineers, the institutions have struggled financially in recent years and a whopping 90 percent of their graduates will leave with student debt. Tuitions also are rising faster at HBCUs than other kinds of institutions, Cummings noted. 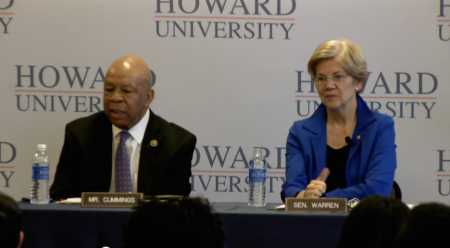 “My peers are extremely bright, intelligent young men and women, but their families are unaccustomed to paying each semester for education,” said Tyrone Hankerson, a Howard University senior. He described seeing aunts, cousins, and grandparents co-signing for loans, watching his peers take a semester or two off to work and save, or sometimes just leaving altogether. “Sometimes they’re left with no option but to give up.”

But the future is even more precarious at for-profit colleges. Sharon Williams, a U.S. Army veteran and University of Phoenix student, told Warren and Cummings how she was “harassed” for months by University of Phoenix recruiters who promised her that her credits would be transferable and that she would get a special discount on tuition. Neither happened, and now Williams has plenty of debt and no degree.

“When you found out you were deceived, did you get your money back?” Warren asked.

Although students at for-profits account for just 10 percent of college students in the U.S., those institutions get 25 percent of all federal funds for higher education, Warren noted. Also 50 percent of all student loan defaults in the U.S. are from former for-profit students. In a recent U.S. Department of Education (DOE) analysis, 72 percent of for-profit graduates earn less than high-school dropouts. Meanwhile, the for-profit industry has filed suit to stall new federal regulations that would hold them accountable for their students’ inability to get jobs and pay back those loans.

The DOE must do more, Warren urged. They must enable students who have been deceived by for-profit colleges to discharge their loans – and they should do so “immediately,” she said. “These borrowers—people who were cheated and people who have been buried in debt— just keep on paying and the government just keeps on collecting.”

While the for-profit industry has its high-priced lobbyists on Capitol Hill, Warren told the audience Monday that they have power in numbers, and she encouraged them to engage lawmakers through petitions, letters and phone calls, and on-campus activities.

“It’s going to take all of us to move the ball down the field,” said Cummings. “But we have people power!”