According to a recent report from the Pew Research Center, 95% of teens use a smartphone, and 45% say they are online almost constantly. About 70% of teens are on Snapchat and Instagram, while 85% are on Youtube.

One would think all this near constant “socializing” would make teens feel more connected than ever before.

In her classroom, says teacher Cori McAbee, the opposite is true.

“Social media has crippled my students when it comes to interacting with one another in person. Their very ability to communicate is deteriorating,” says McAbee, who teaches 11th grade English in Rutherford County, North Carolina.

The very definition of “social” media may be misleading, according to  experts who are finding that the more time teens spend on social media, the lonelier and more anxious they are.

There’s a correlation between smartphone usage and lower satisfaction with life, according to Jacob Barkley, professor of health sciences at Kent State University.

“Interaction on social media is not beneficial. It’s electronic," explains Barkley, who has been studying smartphone use and students since 2013. "The higher the cellphone use, the more time spent on social media, and the higher the anxiety. Peer relationships actually get worse the more you use your phone.”

Jean Twenge, a psychology professor at San Diego State University, reached similar conclusions in 2017. In her study, Twenge discovered that students who spend more time using smartphones and other electronic devices are less satisfied with their lives than students who frequently engage in face-to-face interaction.

"We found that teens who spent five or more hours a day online were 71 percent more likely than those who spent less than an hour a day to have at least one suicide risk factor (depression, thinking about suicide, making a suicide plan or attempting suicide). Overall, suicide risk factors rose significantly after two or more hours a day of time online," Twenge wrote in 2017. 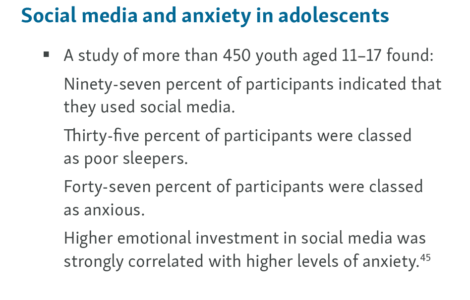 If teens were to follow up high social media usage with lots of time spent socializing in person, the effects perhaps wouldn’t be so adverse. But in most cases, they aren’t. It turns out, liking a post, commenting “Cute,” or keeping up with a “snapchat streak” isn’t the same as catching up. It’s not even close. Yet too many teens, according to these experts, are substituting real life interactions for instagram posts, and paying the price.

Because research into social media and education is still generally in its infancy, many educators are still trying to fully understand the effects of these technologies. Social media can be an effective teaching tool, but many educators are alarmed at the role it plays in heightening student anxiety and stress.

In 2018, the Centers for Disease Control issued some sobering statistics about student anxiety and depression. Teens are more lonely, anxious and depressed than ever. About a third of teens surveyed by the CDC said they’d felt persistent sadness or hopelessness. Social media, says John Richter, director of Public Policy at the Mental Health Association, believes social media is exacerbating this trend.

“Researchers are finding that when someone develops depression and withdraws from peers, they see other people on social media smiling and at parties with friends. It magnifies their sense of isolation,” says Richter.

The Child Mind Institute's 2018 Children's Mental Health Report focuses on anxiety in teenagers, spotlighting the prevalent role of social media has in their lives.  The report points out that existing research does conclude that social media can be constructive,"youth with a stronger emotional investment in social media are likely to have higher levels of anxiety."

And yet, students have trouble putting their phone down for too long, says Crystal Huset, counselor at Pardeeville High School in Wisconsin.

“It seems like many students struggle to detach from their electronic devices,” says Huset. “Many students do see social media as an issue, but it is also the only thing that they know.”

Anne Braun, 5th/6th grade teacher at Woodland Elementary in Kansas, noticed the increase of mental health issues in her students. “I never had kids diagnosed with anxiety and depression 10 years ago,” says Braun. “They compare themselves, and it brings on bad feelings.”

Katrina Smith, a 5th grade teacher in North Carolina, agrees. “They base their love of themselves on how people respond to their pictures,” says Smith. ”

The lack of real life communication, the comparison, and the bullying are too much for some students to bear, Smith adds.

Recently, she noticed a student acting out in her classroom. “She was especially agitated and disrupted the class. After working with her, I found that she had a lot more going on, and it had to do with Instagram. Her so-called friends had called her names the evening before.”

Anne Braun, says students will talk about feeling left out when they see their friends communicating on social media. “They have FOMO- fear of missing out. They don’t have the tools to deal with these negative emotions.”

Discussing Social Media in the Classroom

Ideally, every school district in the nation would be equipped with a comprehensive, systemic program to address students' mental health challenges.  Despite renewed attention to the problem in recent years, t's clear schools have a long way to go.

In 2018, New York and Virginia became be the first states to require mental health education as part of the public school curriculum.  It's a start, says John Richter, because the curriculum will help teach kids how to deal with some of the pressures in their lives.

“How do we help kids who experience anxiety because of social media? The first step is teaching kids to recognize what anxiety actually is and feels like, and how to seek help," Richter said.

While many districts are taking significant steps in designing new evience-based programs, helping students navigate social media is a challenge that many educators are taking on at the classroom level.

Larissa May, CEO of #HALFTHESTORY, a company dedicated to healthy social media use, believes that educators, first and foremost, should simply be aware of their student's experiences on social media.

“Every adult has experienced scrolling through Facebook for too long or comparing themselves on social media. Let your students know you understand these issues,” she says.

Showing students other ways to use social media in the classroom can also help prepare them for healthy use in adult life, says teacher Anne Braun.

“I had a student create a website after her friend got diagnosed with cancer, and the website allowed visitors to donate to the American Cancer Foundation,”  Braun recalls.  Her students also respond favorably to positive feedback online via the classroom Twitter account. “They get comments from the online community, as well as parents and grandparents.”

Larz suggests integrating a social media component into every project. “Social media is an extremely useful and powerful tool, and we can’t run away from that,” she says.

Awareness of the issue is the first step for educators, parents and students alike,  says Jacob Barkley of Kent State. “Encourage students to step back and examine their usage more critically,” he advises. "Smartphones weren’t a thing...now we’re using them a lot. How is that affecting our lives?”

It's not about educators controlling their students' social media usage, adds Larz, it's about holding a conversation that many students want to have.

"It's important to present the impact of social media talk as facts. There is research showing the effect on our mental health, and it’s something to be discussed in the classroom.”