Spin-Out? Fidget Spinners in the Classroom Get Mixed Reviews

Fidget spinners are a huge fad but not all educators want to give them a whirl. 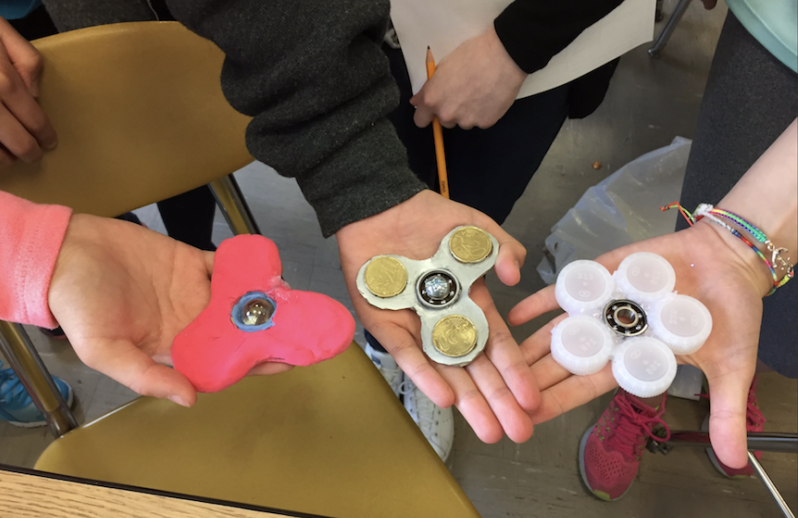 They whirl and whir, flash and spin -- some even glow in the dark. And unless you’ve been teaching under a rock or on a remote mountaintop, you know how quickly fidget spinners whizzed onto the scene and into backpacks, pockets and lockers of school kids everywhere. Marketed by some as a tool to help with focus, the spinners have sparked a heated debate among educators about their place in school. Are they useful tools for students who need help with attention deficits or distracting toys that should be banned from classrooms?

No matter your position on the fidget spinner debate, one thing is certain – their popularity isn’t winding down yet.

“They’re really fun,” says 7-year-old Jacob Lapham, a fidget spinning master who whirls them on his head, knee, and nose. He’s even developed a “magic trick” where he uses double-sided tape and spins one upside down from his fingertips.

“You can do really cool tricks,” he says. “I look them up on YouTube.”

Kids like Jacob think fidget spinners are fun and cool. Educator opinions, on the other hand, are mixed. When NEA Today posted an article about fidget spinners in school, we received hundreds of comments, ranging from “they are horrible!” and “they are nothing but distracting toys” to “they may be just what some students need” and “kids spin them all day and still listen and do their work.”

Gadgets that release nervous energy – sometimes called fidget props – have long been used to help anxious kids regain calm or ADHD kids regain focus. A 2015 study in A Journal on Normal and Abnormal Development in Childhood and Adolescence, students with ADHD self-regulate alertness by moving or “fidgeting” to attain peak cognitive performance.

But more traditional “fidget widgets,” like stress balls or small pieces of clay or putty, don’t light up or make noise and aren’t sold in checkout aisles at supermarkets and convenience stores.

Some schools have limited fidget spinner use to recess or free periods, while others have banned the spinners altogether.  A district in Kentucky asked that students bring in a doctor's note before they can bring their spinners to school.

Some Educators Give Fidget Lessons a Whirl

Diane Stiles, a sixth grade math and science teacher at Jericho Middle School in New York, is in the ““If you can’t beat ‘em, join ‘em” camp. She decided to tap into the fidget spinner enthusiasm for lesson planning.

“After the botte flipping craze wore off, the kids were very excited about fidget spinners,” says Stiles. “I didn’t really see it as a problem, and my co-teacher and I decided to take something they were enthusiastic about and use that to foster learning with a STEM project.”

The students formed groups and built their own fidget spinners then held a competition to see whose spinner spun the longest.

“The creativity was amazing,” Stiles said. “They had so much fun they didn’t realize how much they were learning.”

Each team had a ball bearing to start with, and from there the design ideas took off. They used everything from popsicle sticks and pennies to marbles, pieces of cardboard and bottle caps. After each team finished building their spinner, the class measured them to determine size and mass.

“Then we did the spinning trials to find out which one spun the longest and what the variables were – including design and mass – that made it spin,” Stiles said. “The students also had to explain how would they modify their design for a longer spin. We determined the average length of spinning, with and without human error, which brought up statistical outliers as well as concepts of Newton’s law, like inertia and velocity.” 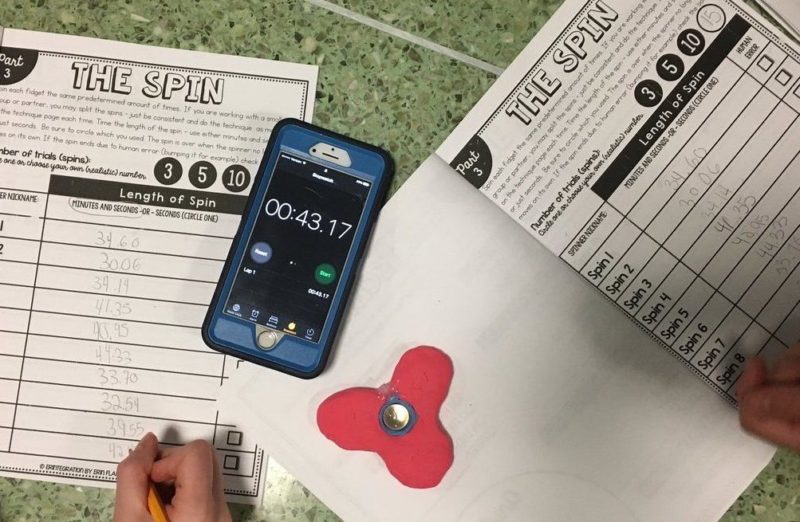 Diane Stiles, a sixth grade math and science teacher, decided to tap into the fidget spinner enthusiasm for lesson planning.

Lots of Learning Packed into One Lesson

Math, science, creative thinking, and collaboration all wrapped up into one lesson that tapped into student interest and excitement over what could have become nothing more than a classroom nuisance.

Stiles says that as long as she’s been teaching certain students benefit from manipulating squishy balls and other fidget props. The difference with fidget spinners is that they became a fad, even a craze.

“They can be distracting, yes, but for certain kids they’re appropriate,” she says. “And if kids are excited about them, they offer so many opportunities for learning.”

She recommends letting the kids come up with ways to manage fidget spinner use to minimize distraction. Let the class decide if they be used only during recess and lunch, or perhaps only when students are working on problems quietly rather than during classroom discussions.

Jacob Lapham thinks they should be allowed in class at least some of the time. He thinks they help alleviate anxiety.

One time when I was at home and I was crying, I started fidget spinning,” he said. “It entertained me while I spun it and then I didn't feel bad any more and it would be good for kids that are upset in class to feel better."