Thousands rally outside the Supreme Court to send a message to the corporate special interests behind 'Janus' case: You won't stop working families from realizing the American dream. 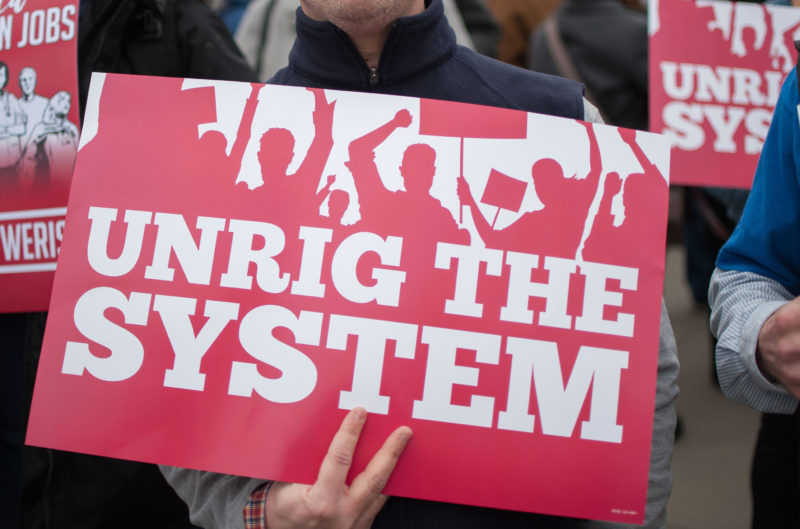 Union and non-union workers from across the nation stood together and raised a strong collective voice Monday morning outside the U. S. Supreme Court in their fight for working people's right to join unions.

At issue in the Janus v. AFSCME (American Federation of State, County, and Municipal Employees) case being argued inside the courtroom is the question of whether government employees who are covered by and benefit from a union contract, though not members of the union, should have to contribute to the union's costs for contract negotiations.

Outside of the courtroom, one speaker after another commented on the impact Janus could have on public employee unions and the need to beat back wealthy special interests and their attack on workers and communities.

"The Janus case is extremely harmful to labor," said Terrence Wise, a fast food worker from Kansas City, Mo., and labor leader with Fight for $15, an organization advocating to raise the national minimum wage. "In the words of Abraham Lincoln, 'All that harms labor is treason to America.'"

When the Rev. Michael Seavey from the Roman Catholic Diocese of Portland, Ore., took the podium, he quoted Pope Francis: "There is no good society without a good union."

The Rev. Seavey and Wise were among a dozen speakers representing a wide range of social justice, civil rights and labor organizations. Another speaker, kindergarten teacher Kember Kane from Silver Spring, Md., said it is through negotiating collectively that educators can advocate for the conditions that support student learning such as safe schools, small class sizes, and for resources that help educators do their jobs.

Make no mistake about it, we are living in a system that is rigged to benefit special interests and billionaires at the expense of American working people." - NEA President Lily Eskelsen García

A media conference was also held on the court's plaza following the conclusion of oral arguments. Featured were attorneys arguing on behalf of AFSCME and working Americans, as well as for plaintiff Mark Janus, primarily supported by the National Right to Work Legal Foundation. Janus is an Illinois state employee who is suing AFSCME while asking the court to reconsider long-standing rules that have made it possible for people to stand together with one voice at work and in their communities.

Illinois is one of 23 states that allow unions to charge "fair share fees." At job sites, workers vote on whether or not to form a union in the workplace. Even if a majority votes for a union, workers who don't want to join don't have to, they just pay a reduced "fair share fee" or "agency fee" to cover the cost of bargaining and representation that the union is legally required to provide for all workers. Such fees are reduced amounts charged to workers who opt out of union membership yet continue to receive the union representation and bargaining services that unions provide for the benefit of all employees. These fees are not charged for any political purposes.

Janus argues that these fees violate his First Amendment rights on the theory that collective bargaining is inherently political and therefore requiring him to pay the fee is no different than forcing him to pay for political activity he disagrees with. But the Court has never found collective bargaining to be equivalent to straight up political activity. And Janus arguments on that score seem to be a stalking horse for attacking strong unions and the benefits they provide workers.

In the nation's 27 right-to-work states, where employees are not obligated to join a union as a condition of employment, union density is significantly lower and, as a result, educators have less negotiating power to advocate for student learning conditions. According to several speakers, as nurses, educators, firefighters, sanitation workers, and other public employees enjoy the benefits, job security, and other protections the union negotiates, it is only fair that all employees contribute to the cost of securing those benefits and protections.

"Today, thousands of working people rallied outside the U.S. Supreme Court and around the country to send a message that, whatever the decision in this case, these oligarchs won't stop working families from realizing our American dream," said NEA President Lily Eskelsen Garcia. "Make no mistake about it, we are living in a system that is rigged to benefit special interests and billionaires at the expense of American working people." 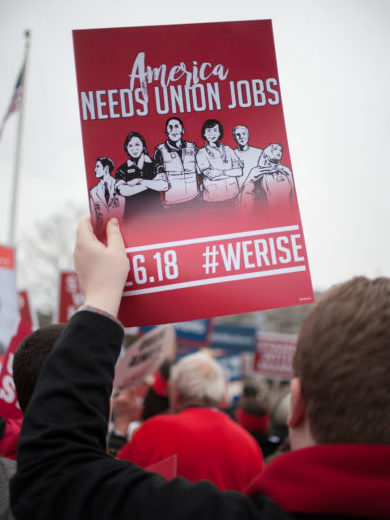 Illinois Attorney General Lisa Madigan said at the post-hearing conference that the case was not about impinging anyone's First Amendment rights.

"This is a case where there are a group of very well-funded right-wing extremists that want to eliminate unions throughout this country," Madigan said. "If that happens we are going to see an even steeper decline in the middle class and we're going to see an even greater economic inequality than we already have."

The corporate special interests behind this case are, according to Eskelsen Garcia, "dead set on eliminating the rights and freedoms of working people to organize, to negotiate collectively and to have any voice in working to better their lives. It is no shock to most that is has become harder and harder for working people to get ahead and provide stability for their families."

In 2016, a similar case, Friedrichs v. California Teachers Association, asked the court to overturn Abood v. Detroit Board of Education -- the 1977 case in which the court unanimously upheld fair share fees that support collective bargaining. Each state was left to decide for itself whether to permit such fees.

A decision in the Janus case is expected in June, before the court adjourns. The deciding vote might be the Trump-appointed Justice Neil Gorsuch. The other justices split 4 to 4 in the Friedrichs case, which was decided after the death of Justice Antonin Scalia.

If the court bans fair share, it will mean that some workers will have to pay for the benefits enjoyed by all workers. Also, such a decision will make it harder for teachers, firefighters, nurses and other public service workers to negotiate for decent wages and benefits. Every public employee who benefits from a negotiated contract should contribute to the costs of securing that contract.

Lee Saunders, president of the AFSCME, the nation's largest public employee union and the defendant in the Janus case, said the intention behind the legal action was to gut the power of progressive forces.

"The billionaires and corporate special interests behind this case don't believe we should have a seat at the table," Saunders said.

Conservative organizations, think tanks, and other right-wing activists backed by corporate donors including the Koch brothers, the family of U.S. Secretary of Education Betsy DeVos, and the Bradley Foundation, have long been preparing for a case like Janus as part of a larger campaign to break unions. Secretary DeVos, a staunch proponent of reducing the power of teachers' unions attended courtroom proceedings.

Despite the potential for setbacks from Janus and other attacks, NEA and its affiliates will remain the leading voices of the education professions and will continue to work on behalf of students and public education.