'Starving Student' Stereotype is No Joke: Hunger on College Campuses is Growing

As more students struggle with “food insecurity,” the number of campus-based food banks has shot up.

“I missed the apples, but I got a lot of other good, healthy stuff,” says Flora, a Bunker Hill Community College (BHCC) student who is cradling a bag of oatmeal, cauliflower, carrots, ground turkey, and enough yellow onions to fuel her favorite sofrito recipe.

“I’m Latina, so I have to have my sofrito!” she laughs.

She’s also human, so she has to have food, period. Unfortunately, as the costs of college in the U.S. have skyrocketed—not to mention affordable housing, healthcare, and transportation—the old “starving student” stereotype is close to truth for Flora and hundreds of thousands of her peers across the nation.

Flora’s bag of food, gathered during the final minutes of the Greater Boston Food Bank’s monthly visit to the BHCC campus, hopefully will feed her for at least a week, or until she gets her monthly $70 in SNAP benefits, previously known as food stamps.

“SNAP usually lasts about two weeks, and that’s if I buy smart—things that I actually have to cook,” says Flora, a nursing student. “If I get myself a coffee in the morning, that’s it for the day!”

In 2016, hunger on college campuses doesn’t mean late-night munchies. The issue is a growing number of students whose only meal of the day is donated, day-old bread.

More than half said they struggled with “food insecurity,” or a lack of nutritional food. More than one in five said they regularly go hungry because they don’t have money to buy food. Thirteen percent also reported they were homeless.

Other studies have looked at specific campuses or systems: 21 percent of University of Hawai’i students were found to be food insecure in 2009; 39 percent at the City Colleges of New York (CUNY) in 2011; 42 percent on University of California campuses in 2015; and a whopping 59 percent at rural Western Oregon University, also in 2015.

“Students on food stamps doesn’t sound like something that should be happening—but it does,” says BHCC instructor Wick Sloane, a frequent author on the topic of campus hunger.

Add It Up: Tuition, Food, Transportation…

The problems are particularly acute at community colleges, where more than a third of students live in households earning less than $20,000 a year, even as the annual expense of attending a community college is estimated to be about $16,235 a year, according to the College Board.

Not surprisingly, these are students who struggle to stay in school, and finish the degrees they need to get good jobs. Last year, the College Board reported that just 14 percent of community college students from families earning less than $30,000 a year had completed their associate’s degrees, six years after they started them. At BHCC, poverty is a “huge factor” in its 10 percent graduation rate, says adjunct professor David Dow, a nearly 40-year veteran on campus, and a regular volunteer at BHCC’s food bank since it started in 2012.

And yet, earning a degree offers the best chance to break out of poverty. By 2020, 65 percent of all jobs in the U.S. will require a degree, according to Georgetown University. This is a fact that has not escaped President Barack Obama, who early this year introduced “America’s College Promise,” a plan for free community college that also has been endorsed by candidate Hillary Clinton.

“Now, more than ever, a college degree is the surest ticket to the middle class,” said Obama at a speech in Tennessee. “It is the key to getting a good job that pays a good income—and to provide you the security where…you have a skill set and the capacity to learn new skills. And that is the key not just for individual Americans, that’s the key for this whole country’s ability to compete in the global economy.”

Students know this, too. That’s why they skip meals to pay for books, or cover the rent. In a desperate but hopeful calculus, they opt to starve the student they are now to invest in the nurse, or teacher, or accountant that they someday hope to be. But it leaves them extremely vulnerable, and not very ready to learn, either.

“If you don’t feed yourself, you can’t think clearly, you lack judgment, you can’t build the neurons in your brain!” says Maria Puente, chair of BHCC’s behavioral science department and a regular volunteer at the campus food bank. “I’ve had students who have struggled in class, and the fact is they are not eating well.”

It’s also likely students work more hours to make more money to eat, making it difficult for them to find time to attend class and study. 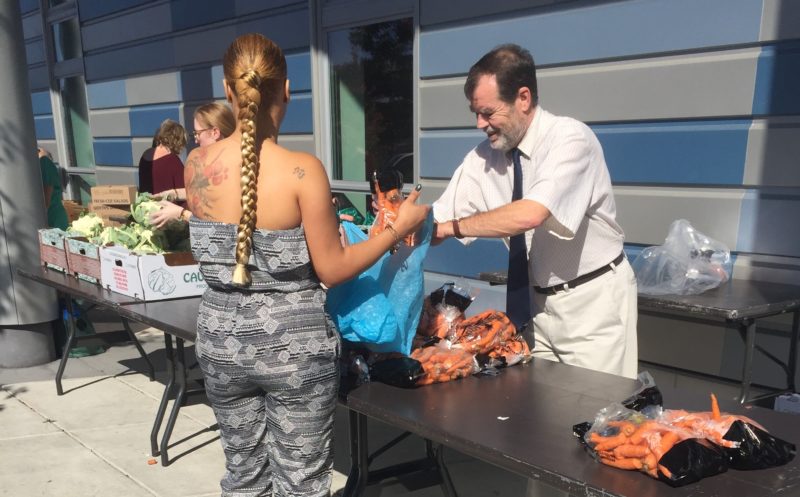 Adjunct Professor David Dow works at a food bank at Bunker Hill Community College in Boston. The number of campus-based food banks has shot up from four in 2008 to more than 120 in 2014. (Photo: Mary Ellen Flannery)

At BHCC, faculty and staff do what they can to help—it’s not enough, but it’s a lot. At “Single Stop,” a small bustling office above a computer lab, students can pick up a donated Panera Bread baguette and a PB&J sandwich every day. Meanwhile, the Boston food bank’s “mobile market” arrives monthly with about 30 pounds of fruits, vegetables, and proteins per student in line, as it does at two other eastern Massachusetts community colleges.

Across the U.S., the number of campus-based food banks has shot up from four in 2008 to more than 120 in 2014, the Michigan State University Food Bank told the Washington Post.

“The fact that just beats us over the head is that eligible students in K12 get free breakfast and lunch, and then the same students go on to higher education, which society urges them to do, and they lose breakfast and lunch,” Sloane points out. In most cities, they also lose the free bus and subway passes assigned to high school students, a benefit that costs $85 a month to replace in Boston.

The worst part of the job? Single Stop director Kathleen O’Neill says it’s the adjunct faculty who also, quietly, ask for her help.

On the morning of the food bank delivery, O’Neill is helping a student who, along with her 10-year-old son, her brother, and her mother, faces eviction from their home within the week.

“Our job is to get them what they need to persist, to stay in school, and graduate,” she says.

Often, this isn’t an easy task. “I’m struggling,” admits Flora, who juggles a full-time course load with a 35-hour a week job at a neighborhood pizza shop. But, she adds, “I’m just a few credits from graduating.”