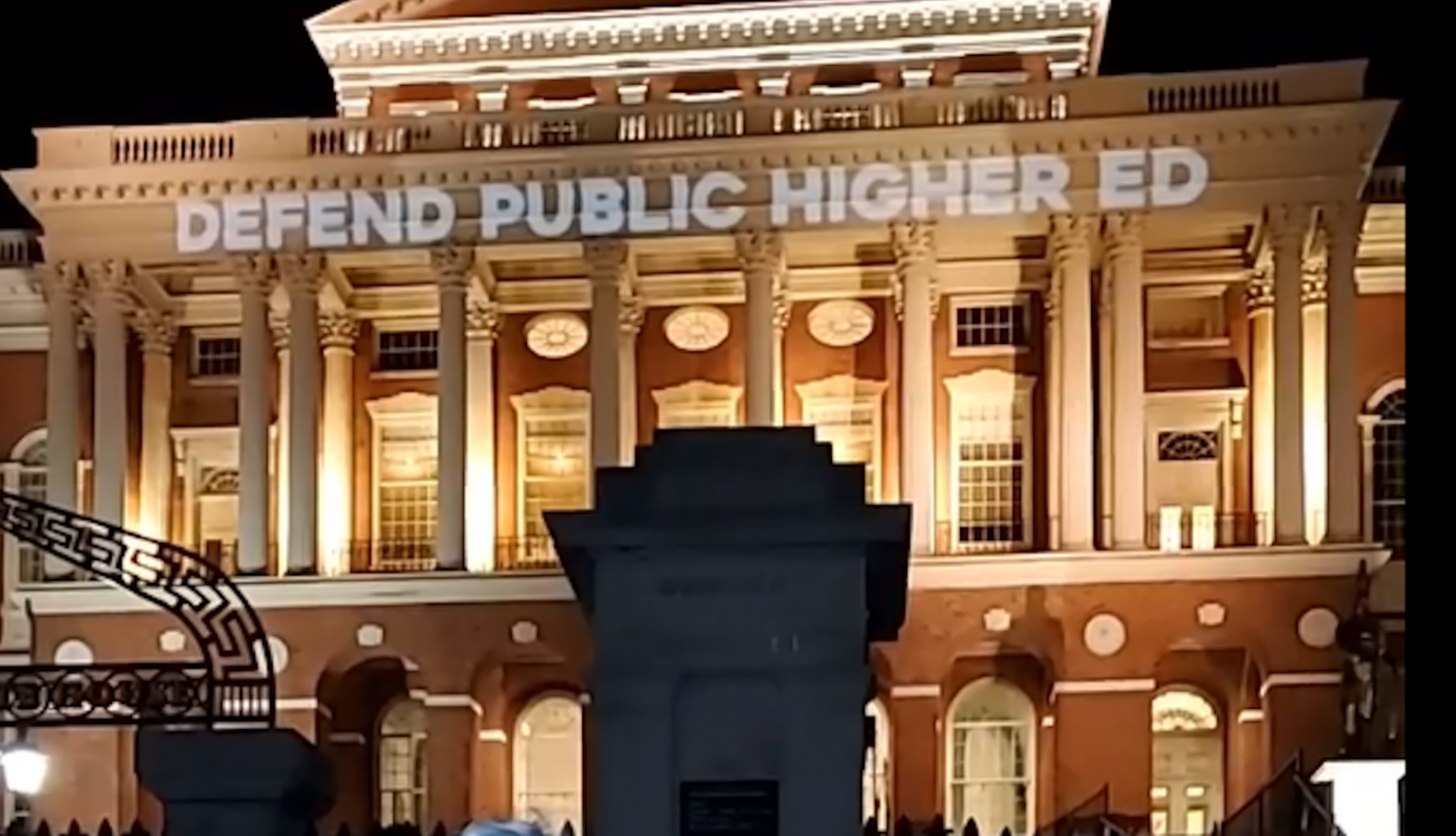 Across the U.S., 32 states are spending less on public colleges and universities than they did in 2008, a new NEA report has found.

That lack of state investment means the cost of higher education is being transferred to students and parents, driving the nation’s student-loan crisis. It also means students may not be getting the academic and other support they need to be successful in higher education and to graduate into fulfilling careers.

“It’s pitiful,” says United Faculty of Florida (UFF) President Andrew Gothard. “There’s no reason a higher ed system of the quality we have, in a state with one of the highest economies in the world, can’t be funded in a way that meets the needs of our student population. There’s a real disconnect between what we need on the ground and the punitive desires of our leaders. At UFF, we want to see those issues rectified. We want our institutions to be what our students deserve.”

Thanks to UFF’s advocacy efforts, Florida’s funding isn’t the worst. States without staff and faculty unions have seen steeper declines in state investment, such as Louisiana, where higher-ed funding declined $5,500 per student, corrected for inflation, between 2008 and 2020. Meanwhile, in states where faculty and staff regularly speak to legislators, through their unions, public colleges and universities are more likely to see improved investment. In Illinois, for example, state funding increased by nearly $5,400 per student.

Across the nation, the average decline between 2008 and 2020 was nearly $1,500 per student, adjusted for inflation. In 2020, it looked like things were slowly improving, but then the pandemic hit. State appropriations fell again in 2021 and 2022, NEA’s preliminary analysis shows.

Today, state lawmakers are working on 2023 budgets, and faculty and staff are ready to make a difference. First, they need to elect candidates who support public education, and then they need to make sure state lawmakers understand the needs of their students, says Gothard. “We will not be deterred,” he promises.

Guess Who Pays for Funding Cuts?

When state lawmakers turn their backs on public colleges and universities, it falls to students and families to make up the difference. In other words, when state funding goes down, student tuition goes up.

Between 2008 and 2018, the two states that made the biggest cuts to higher-ed funding were Arizona and Louisiana, the Center on Budget and Policy Priorities found. Meanwhile, the two states that saw the biggest tuition increases over those years were… also Arizona and Louisiana. In Arizona, tuition increased an average of $5,384 per student during that time; in Louisiana, it increased by $4,810.

These tuition increases are driving the student debt crisis in the United States, which—despite recent advances by the Biden Administration—is still a barrier to higher education. Too many students can’t afford to go to college and pursue their career dreams, and too many who do are sentenced to a lifetime of debt. This is especially true for students who might be the first in their families to attend college.

Of course, in Florida, the problem of faculty retention isn’t due to low pay alone. It’s low pay plus legislative attacks on faculty rights and students, and a politicized climate that makes educators fear for their jobs. “We have very high-quality institutions in Florida, but this isn’t a place where faculty are clamoring to come—and we, at the United Faculty of Florida, are very concerned about that,” says Gothard.

Making matters worse, on many campuses, these scant funds are going toward things that have little to do with student learning. Instead of investing in faculty or student-support staff, administrators are hiring more administrators.

For example, NEA data shows that at Long Beach City College in California, where DeWayne Sheaffer, the president of NEA’s National Council for Higher Education, is a career development counselor, the number of full-time “executive” employees has increased 78 percent over the past 20 years.

“We used to have five deans,” recalls Sheaffer. “Now, we have more deans, more vice presidents, and associate deans too. I saw a new position created the other day and the salary… oh my!”

[Curious about the number of executives at your college or university? Check out NEA’s exclusive higher-ed database.]

For the most part, colleges aren’t investing in full-time faculty and student-facing staff, a 2021 report from the American Council of Trustees and Alumni (ACTA) found. Consider these numbers: From 2012 to 2018, while the number of business and financial operations staff rose a whopping 25 percent, the number of student-facing support staff fell 10 percent. Meanwhile, the number of full-time faculty rose by 5 percent. The report concluded: “Colleges and universities seem to be cutting lower-level staffers to hire more expensive, more specialized administrators.”

The Other College Debt

Many colleges and universities also are spending huge amounts of money on “the other college debt,” which is the billions of dollars that institutions borrow to fund construction projects.

In Massachusetts, for example, Massachusetts Teachers Association (MTA) members have found that the University of Massachusetts system has $3 billion in capital debt and state colleges $1.2 billion in capital debt. The cost of paying that debt back takes a sizable chunk of university and college operating budgets, which means UMass and the state colleges have to cut costs elsewhere—like by eliminating academic programs or student services—or raise tuition.

Indeed, all of that is happening. The Massachusetts Campus Debt Reveal Project found that UMass and state college students are paying an average $2,500 a year, per student, to cover their institutions’ capital debt. As a result, students are taking out more student loans, or working multiple part-time jobs and struggling to learn and succeed.

“Personally, I chose to attend a state school because it's supposed to be less expensive," Framingham State University student Tyler Risteen told the Project. "The government is supposed to be helping us, but in reality, it's just the schools taking out loans and then us paying for those loans."

Are These Even “Public” Universities Anymore?

It used to be that “state university” meant a university was largely funded by the state, for the benefit of the state. In fact, back in 2008, U.S. states spent an average $8,823 per college or university student, NEA’s research shows. Then, the Great Recession struck, and state revenues dried up.

In just one year, state funding decreased by about $2,000 per student. Colleges and universities rushed to fill the gap with tuition increases—and, for the most part, students are still paying the lion’s share today, even though many can’t afford it.

Take Alabama, for example. In 2008, the “student share” of college revenues was about 40 percent. Today, nearly $7 out of $10 dollars going into the public college system comes from students, who often borrow to cover the cost. “Alabama has a lot of low-income people, but our tuition revenue is twice the national average,” noted Alabama Commission on Higher Education Executive Director Jim Purcell to the Alabama Daily News.

Between 2020 and 2021, state funding for higher education declined in 37 states, by an average of 6 percent, the NEA analysis shows. In California, for example, state lawmakers cut funding by $1.7 billion, and the budget was 10 percent smaller than it was in 2020. In Colorado, the budget was cut by 47 percent.

The following year, 2021 to 2022, it was another mixed bag—with about half of states making cuts. At the same time, federal money from emergency Covid-relief funds has helped, mostly in the form of direct-to-student aid such as tuition waivers, housing grants, etc.

Today, state lawmakers are working on their 2023 budgets—and proposals range from good to bad. In Illinois, for example, Gov. J.B. Pritzer has proposed a $208 million increase, while in Florida, Gov. Ron DeSantis is aiming to strip $100 million from state universities.

But proposals are just that, and faculty and staff are poised to shape what's actually adopted by state lawmakers. First, it’s essential to elect pro-public education candidates during next month’s mid-term elections. Then, union members have to join together to be heard, urges Gothard.

“Talking as one individual to one legislator is not going to have the impact you want. You need to have a coordinated, grassroots effort to talk with local lawmakers about what’s happening on local campuses. Talk about how a lack of funding is affecting their constituents’ access to higher-level degrees and programs,” he urges.

“That’s the kind of thing that can be persuasive.”