Will anyone with a concealed-weapon permit soon have the right to carry guns in schools? Not if educators and parents have anything to say about it.

State lawmakers in nearly 20 states this spring are considering, or have recently considered, bills that would allow guns in k12 schools or on college campuses — including Colorado, Texas, Nevada, Florida, and Georgia.

“There’s definitely a lot of activity this year. In terms of higher ed, we had eight states with bills last year, and now we have 15 — and even one would be absolutely unacceptable,” said Andy Pelosi, executive director of The Campaign to Keep Guns Off Campus.

Among the state legislation under current consideration is a bill in Colorado that would allow any individual with a concealed-weapon permit the right to carry guns into K12 schools. One of its chief proponents is a lawmaker who was a sophomore at Columbine High School during the 1999 shooting. But among its opponents is Colorado third-grade teacher Katie Lyles, an NEA member and also a Columbine survivor, who was spurred by the Sandy Hook in school shootings in 2012 to speak up for gun safety.

"I think [the CO bill] a really short-sighted, reactive solution," Lyles told National Public Radio. "I feel like we need to be looking at a different conversation. And that conversation is, how do we prevent violence from even entering that school."

Moreover, how do guns and kids safely mix, she asked. “"If I had a gun, kids are around me all of the time. They're giving me hugs. So where do I keep that gun?"

Kenneth Trump, president of National School Safety and Security Services, supports having trained school resource officers carry firearms but is strongly opposed to laws that would allow any non-law enforcement individual, including teachers and other school staff, to bring a gun onto school grounds.

“There is a huge difference between having trained, certified and commissioned law enforcement officers who are full-time, career public safety professionals that are armed and assigned the duty of protecting students and staff versus having teachers, custodians, cafeteria workers and other non-public safety professionals packing a gun in school with hundreds of children,” said Trump.

However, understanding the implications of these misguided proposals  — and advocating against them — can make a difference. Legislation already has been stopped in Wyoming, South Dakota, and other states.

Guns in Schools - State of the States

According to the California-based Law Center to Prevent Gun Violence, the vast majority of states (all except Hawaii and New Hampshire) generally prohibit guns from K12 schools, but there are exceptions. For example, concealed-carry permit holders can carry their firearms into K12 schools in 11 states — including Utah, where an elementary school teacher accidentally shot herself in the leg in a teachers’ bathroom in September. 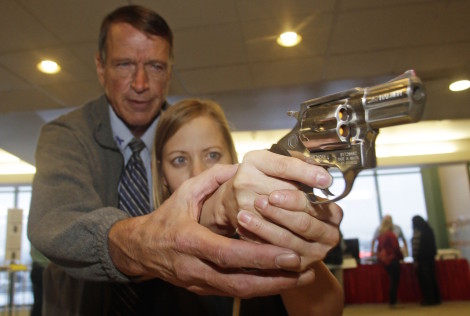 A fourth grade teacher in Utah receives firearms training with a .357 magnum from a personal defense instructor.

This year, gun advocates and their big-money lobbyists are making a strong push to increase those numbers, often using the tragic school shooting at Sandy Hook, Conn., to further their absurd arguments that guns in schools make schools safer. In addition to the Colorado bill, their efforts include campus-carry bills in Texas, Florida, and Nevada that appear to have real momentum.

In Florida, the bill, which passed a state Senate committee this week, follows a November shooting at a Florida State University (FSU) library, which ended in the fatal shooting of the assailant by quickly responding police. Although national gun lobbyists see this incident as an opportunity to push their own agenda, many Florida faculty, students, and law enforcement officers disagree.

Late last year, the United Faculty of Florida (UFF) at FSU passed a resolution, “suggesting that more deadly firearms on campus will not enhance the safety of our students, faculty or staff,” wrote UFF-FSU President Jennifer Proffitt in the NEA Higher Education Advocate. Campus police chiefs and university presidents also have testified to the bill’s potentially dangerous effects. (See the Stop Guns on Campus petition against Florida’s bill.)

In Nevada, a State Assembly committee passed its campus-carry bill this month, sending it on to the full Assembly. (A similar bill to allow guns in Nevada K12 schools and day care centers failed.) One of the bill’s primary sponsors, Nevada Assemblywoman Michele Fiore, has hijacked the issue of sexual assaults on campuses to promote her legislation, telling The New York Times last month, "If these young, hot little girls on campus have a firearm, I wonder how many men will want to assault them. The sexual assaults that are occurring would go down once these sexual predators get a bullet in their head."

Meanwhile, in Texas, the Texas Senate also approved a campus-carry bill this month, which goes next to the Texas House. One of its most vocal opponents is University of Texas Chancellor William McRaven — a retired U.S. Navy admiral who planned the raid to kill Osama bin Laden. “There is a great concern that the presence of handguns, even if limited to licensed individuals age 21 or older, will lead to an increase in both accidental shootings and self-inflicted wounds,” he wrote in a letter to lawmakers.

The Public Pushes Back

But in some states, well-organized educators, parents, and advocates for safe schools and campuses have successfully disarmed pro-gun legislators who would have armed public school teachers, college students, and others.

In Wyoming this month, the state Senate shot down a bill that would have allowed K12 school districts, as well as public colleges and universities, to decide whether to allow concealed-carry permit holders to take their guns into classrooms and onto campuses. A more permissive version, which didn’t provide local discretion, had passed the House.

Also, in North Dakota, for the second consecutive session, the state Senate put a stop to a similar bill, which also had been approved by that state’s House. Under that bill, chosen individuals — not necessarily school staff members — would have been allowed to carry guns in schools after background checks and safety training. Proponents said it would have helped rural schools without immediate access to nearby law enforcement.

“We definitely can win,” said Pelosi. “We know the public is on our side: it’s just a matter of informing and activating them."