Through theater, young people help amplify the conversation around the tough topics of race and segregation and inequality. 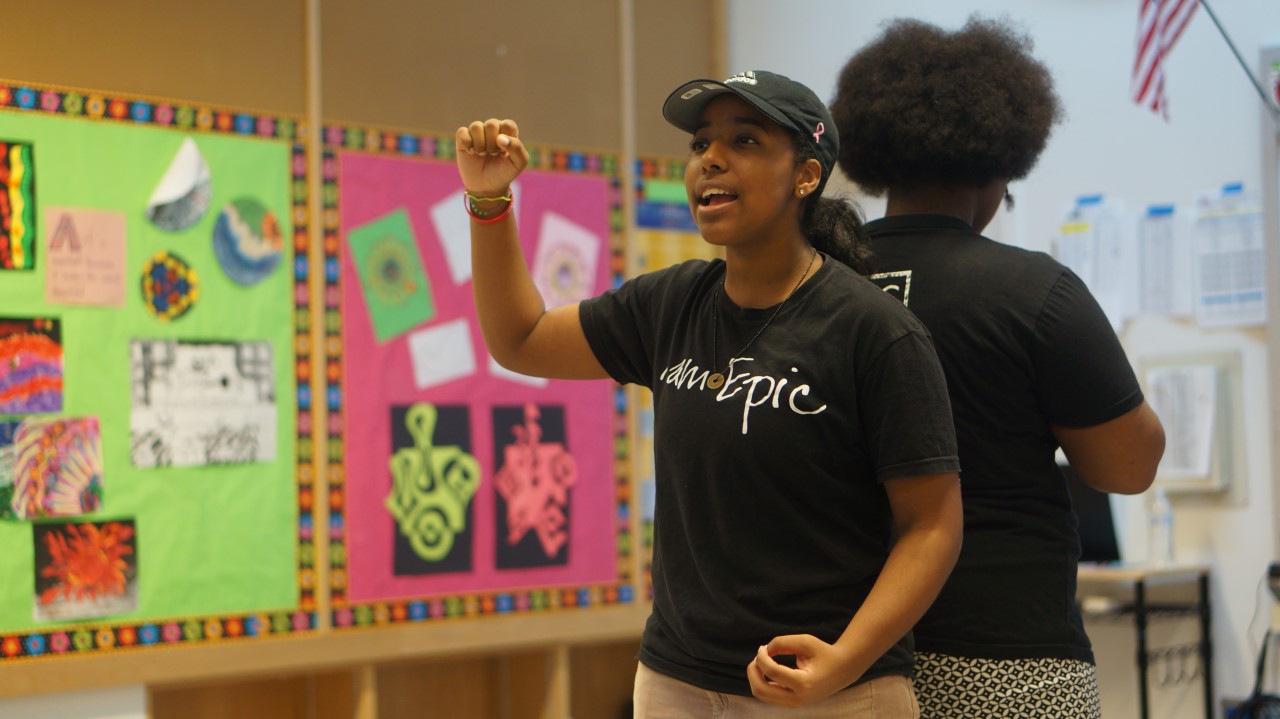 What is the purpose of school? What does separate but equal mean? Who benefits from school segregation? How did we get here?

These were questions posed by five high school actors in a performance titled Nothing About Us at NEA headquarters on November 2. The performance, cosponsored by the National Coalition on School Diversity and NEA’s Education and Policy Practice and Teacher Quality departments, was an exploration of educational segregation written and performed by EPIC Next, a group of New York City public high school students – those who attend segregated schools but are rarely asked about its impact on them.

New York City, home to 8 million people and 800 languages, is renowned for its culture and diversity. Yet more than 60 years after Brown vs. Board of Education, it has one of the most segregated school systems in America.

“Integration has risen to the top of city politics. Now we even have presidential candidates talking about it. But it’s not about busing. It’s going to take more than moving bodies around to confront modern day segregation,” said Matt Gonzales, New York University Metro Center director of Integration and Innovation Initiative (i3) who addressed the audience after the EPIC performance. “Every school needs to reflect the diversity of its surrounding community.”

According to Gonzales,  young people must be included in the process and help shape the policy. When speaking at meetings, town halls, panels and community discussions, he brings the EPIC Next ensemble to break the ice and bring people directly to the most volatile issues, “because young people help ease the tensions surrounding the tough topics of race and segregation and inequality,” he said. “They amplify the conversation.”

EPIC Next is a program of New York’s Epic Theater Ensemble, a collective of theater professionals and Teaching Artists that aims to build bridges between school classrooms, professional stages, and civic centers.

The Epic NEXT program pairs Epic’s professional artists with selected students from Epic’s partner schools beginning in a summer lab and extending throughout the school year. Each Epic ensemble artist mentors two or three students a year in the theater-making process as well as in leadership development, civic engagement, and college readiness. As the culmination of their work in the summer intensive, the students integrate the ideas and concepts explored in the program to create a full-length theater piece, like Nothing About Us.

Epic believes that theater is an art form uniquely capable of fostering social change when it challenges an audience’s expectations and inspires them to talk about what they experienced and learned with their community. 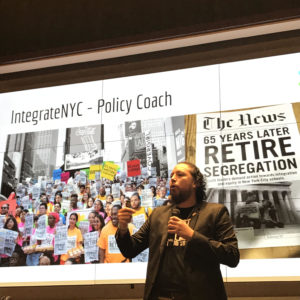 Each performance begins with a single question. In Nothing About Us, it is “What is the purpose of school.”

One by one the student performers, scattered throughout the audience, each wearing a black t-shirt that says “I Am Epic,” rises to answer the question.

Kayla Villanueva, 16, a high school senior from the Bronx, says her answer is both facetious and serious: “School is a way of warehousing troublesome younger members of society.”

To many high schoolers who must pass by uniformed police officers and through metal detectors on their way into school, the building feels more like a prison or “warehouse” than an institution of learning. The students who attend those schools are almost entirely children of color.

The EPIC Next ensemble then gathers in the front of the room and creates a mock town hall about diversifying schools. On one side, students portray parents concerned about low test scores. On the other, the parents of students accused of bringing down test scores.

“Our children are smart and caring and creative,” says a parent. “They could be friends with your children.”

Another, angrier parent: “I see you as taking!”

“We are not taking,” a parent on the opposite side shouts back. “We are earning! This is a meritocracy.”

More shouts: “I’m not racist! I have a lot of black friends! I saw Black Panther three times! I am not racist. I don’t see color! All lives matter!”

The group then morphs into a mock episode of the 90’s sitcom “Friends” where students talk about race at their local coffee shop. It’s humorous but revelatory as some of the “friends” realize hard truths about the challenges of talking about race and white privilege with their white friends.

They pose another question: Who benefits from educational segregation? The powers that be? People with money?  The fortunate few who get plucked out of poverty and placed into a better school with mostly white students?

Or, they ask, is it the system that benefits? The answer, they say, is clear. The system has a life of its own and the system is doing exactly what it is designed to do. It not only benefits from segregation, its survival depends on it.

Nothing About Us is thorough in its exploration of segregation of schools and it challenges the audience to rethink what’s at the root of the problem. It concludes with a simple message – whatever the cause, the problem of education segregation cannot be solved without students.

In the closing scene, the five-member ensemble chanted a phrase that underscored the meaning of the play's title, “Nothing about us without us is for us!”

Find out more about how NYC Metro Center and New York City high school students are advocating for sustainable integration with the Five R’s: race and enrollment, resources, relationships, restorative justice, and representation.