Students Choose Digital Over Print, But At What Cost?

As the migration to digital continues in classrooms, we may be shortchanging reading comprehension in favor of convenience and expediency. 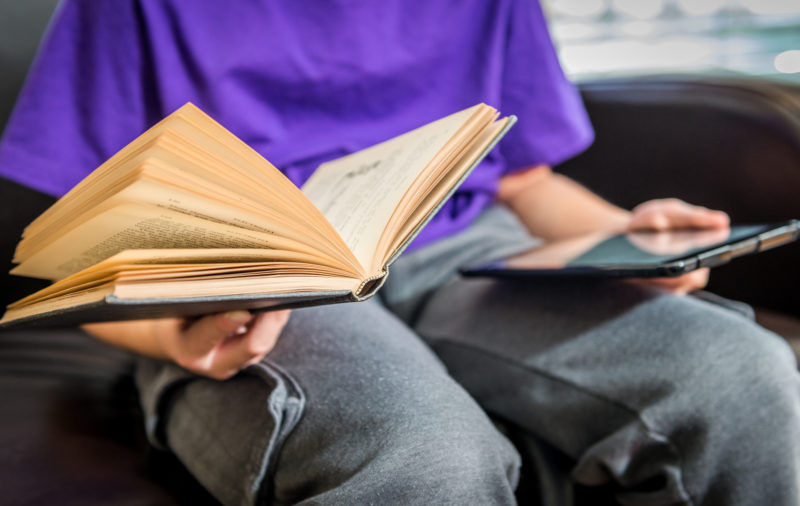 If the average 14-year-old is given a choice of reading an 800-word news article in a print magazine or on an iPhone X, you can bet the digital format is going to win out. And chances are the student will read it very quickly. So what are the downsides? That depends, says Dr. Patricia Alexander, an educational psychologist at the University of Maryland. If the goal is reading comprehension, then the answer is probably more than you think. According to a research survey and their own investigations, Alexander and graduate student Lauren Singer found that students who read a text in print that is more than a page in length are more likely to better comprehend the information.

While digital reading "is part and parcel of living and learning in the 21st century," Alexander and Singer write, educators should still give careful thought about how and when to employ a digital device in the classroom. The rush to digital, Alexander recently told NEA Today, is fueled by a number of factors, but improved student learning may not be one of them.

Through your review of the existing research into print vs digital, you found surprisingly little about which medium is actually better for reading. Did that surprise you?

Patricia Alexander:  A lot of aspects of digital reading  – navigational issues for example – have been well-researched. But when it comes down to the question of what we actually learn from the text, the comprehension side of it, there isn't as much as you would imagine. I think the assumption is, because of the popularity of digital devices and reading online, not many people have bothered to ask what we are really getting from it.

Students strongly prefer digital over print, but according to the research and your own investigations, they also think their reading comprehension is better with digital. What do you attribute that to?

PA: Students live in a world were digital is so commonplace, so, yes, they obviously say they prefer it. Digital always wins. But if you give them a test and ask them to rank how they think they did right after they take it, they have this illusion that they understood better by reading on a digital device.

Why is this happening? Students read faster digitally, right? And that speed gives them the illusion of faster processing and that must mean they're getting it better. Just like in school, kids who finish first are usually perceived to be somehow better or smarter. So speed tends to be aligned with intelligence as it is with so many things. But it can actually result in a deficit of learning compared to print.

For general questions, getting the idea of a text, the medium doesn't really make a difference. But for deeper learning and critical analysis -  that's different. Comprehension is significantly better when participants read printed texts.

What is about reading online that leads this deficit?

PA: There's the "disruptive effect" of scrolling through a digital text. It's the loss of place that occurs through his action. As soon as you scroll you lose continuity in digital and that affects comprehension. When you're reading print, there’s a sense of location, where information is on a page. There are so many more sensory elements that come in play in situating where something is occurring on a page. But we have to investigate this more.

The speed issue is another factor. Students tend to move their eyes over the page. It's highlighter pens. It's the idea that if I somehow just run the highlighter pen over a page, it somehow transfers to knowledge, which doesn’t really happen at all.

Lauren Singer and I have just finished a paper that's in press right now that looks at profiles of readers. The group of readers that did somewhat better in digital read much slower than they did in print. They didn't take the digital environment for granted and maybe they were less confident in it and slowed down their reading. Granted, this was a small group but it was the only group that showed improvement when reading digitally.

Are we too preoccupied with what students prefer? In K12 especially, you constantly hear about "meeting students where they are."

PA:  Let's be honest: Why has there been such a drive toward digitial reading? Why is there a rush toward online courses? From a pedagogical standpoint  or a cognitive-neuro standpoint, its not because we think these things somehow enhance learning. It’s because they’re expedient, they’re efficient. I download my books onto e-books when I travel because it's convenient. Now universities are pushing e-books. Why? They make these decisions for pragmatic reasons, not because it improves student learning.

It’s often hard to criticize anything digital - particularly while championing print - without being accused of being anti-technology.

PA: Sure. I'm far from being anti-technology but what I am against is the non-smart use of smart technology. That's what bothers me. I can only speak to what's going on on college campuses but I'm guessing it's the same in K-12. When a phone buzzes, it's like Pavlov and his dog. We are conditioning today's students in very detrimental ways to be controlled by the technology, and not regulating or controlling it, or using it to its best advantage.

What should a teacher consider when choosing a print or digital format for an assignment?

PA: First, I would urge teachers to think about what they want students to get from the text. Again, does the assignment require a deeper level of thinking? How well the student comprehends could depend on whether they read in print or digital.

I would also teach students early on to get in the habit of stopping when they read digital, to just take the time to self-reflect, summarize, so that they are not flowing through the text so quickly. Take the time to be a bit more regulatory, a bit more meta when they're in the digital environment.

It also helps for students to move some of the digital text off the page. By that I mean, for example, have students carry around a notebook in which they can jot down things from the reading that to them were particularly important, so that they have some sort of trace of what was in that digital text.

We need to look at the bigger lessons as well. Again, why does the younger generation have an illusion about what they are learning? That’s what troubles me the most. I understand the preference for digital, but many students are so poorly calibrated. They are so routinized and familiar with technology, but it's more about diversions, not depth of processing. Yet they walk around with such an illusion of knowing. That's something that anyone who cares about education should consider.