What a survey from the National Center for Education Statistics does and doesn't tell us about teacher autonomy, job satisfaction and student success.

Not exactly breaking news: Teachers believe their classroom autonomy suffered during the No Child Left behind era. According to just-released federal data from the National Center for Education Statistics (NCES), educators reported less classroom autonomy in school year 2011-12 compared to 2003-04. That teachers felt their independence wane during a decade marked by standardization and high-stakes testing won't come as a surprise to most educators, but having real data (a nationally representative sample of more than 37,000 American public school elementary and secondary teachers) to support this widespread belief is nonetheless significant.

Studies have repeatedly shown that classroom autonomy is a major factor in determining level of job satisfaction, simply because, says Richard Ingersoll of the University of Pennsylvania, it speaks to whether educators are treated as professionals.

"The data consistently show us that a big issue is how much voice, how much say, do teachers have collectively in the school-wide decisions that affect their jobs?" Ingersoll explains. "Teachers are micromanaged. They have been saying for a long time that one size doesn’t fit all, all students are different. But they’re told to stick to the scripted curriculum, which might work for a weaker teacher but it drives good teachers nuts."

The NCES took data from the School and Staffing Survey (SASS) from three school years (2003-4, 2007-08, and 2011-12) to compare responses to one central question: "How much actual control do you have in your classroom over specific areas of teaching and planning?" These specific areas include textbook selection, identifying contents and topics to be taught, selecting teaching techniques, evaluating and grading students, disciplinary measures, and the amount of homework assigned. 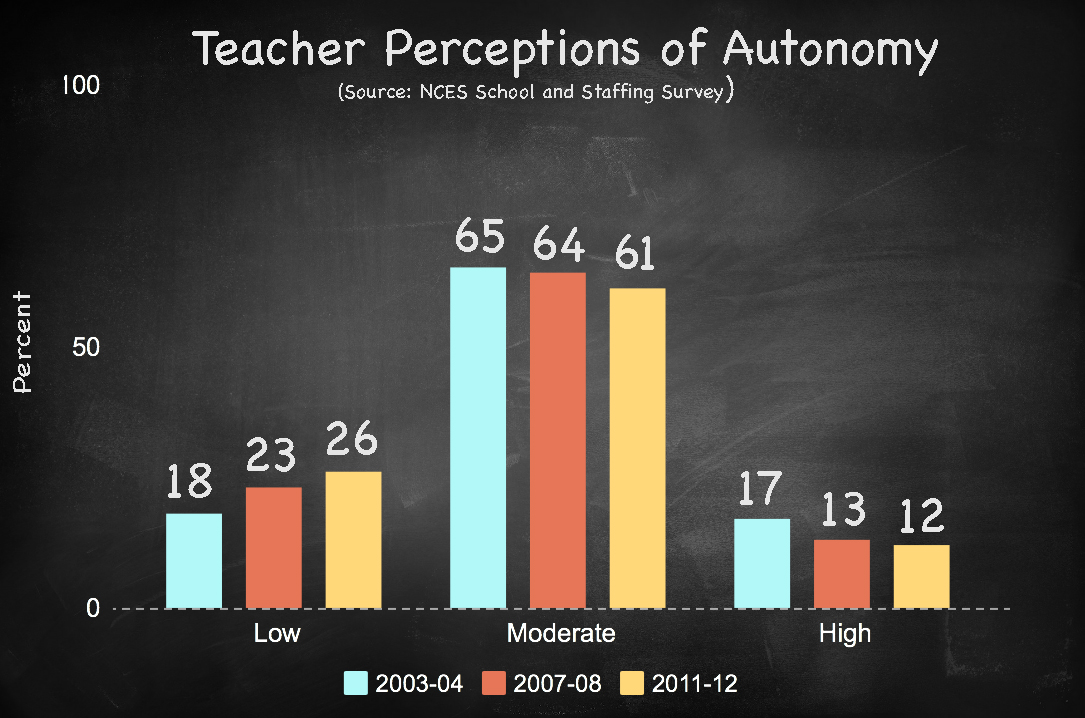 Generally, eighteen percent of teachers perceived "low" autonomy in the 2003-04 school year, right as NCB was being implemented. That number increased to 23 percent four years later and again to 26 percent in 2011-12.  In all three years, a majority of educators reported "moderate" autonomy but at a slightly smaller percentage in 2011-12.

Across all three school years, no specific area was categorized as one in which teachers reported having a "great deal of control." Teacher techniques, evaluating students, discipline and homework levels all were labeled as "moderate," although again by a smaller percentage in 2011-12. Selecting textbooks, content topics and skills were the two areas in which teachers reported the least amount of autonomy in all three school years.

It might be tempting to look at the SASS survey and say, "Well, most teachers have 'moderate' levels of classroom autonomy. Nothing wrong with that, so let's move on." But "autonomy" is a nebulous concept that doesn't necessarily tell us a lot about, for example, teacher success or job satisfaction, and the SASS survey doesn't dig very deep beyond its basic questions.

Does a teacher, for example, who reports a moderate or even a large amount of autonomy actually have the time and space to actually exercise that autonomy? What are the other competing demands placed on educators that they have to cram into a single school day? Does moderate autonomy create a creative and successful classroom and higher job satisfaction for educators?  As researcher Kim Farris-Berg and co-author of Trusting Teachers with School Success: What Happens When Teachers Call the Shots points out, educators should have the opportunity to exercise significant control over their classrooms and not be satisfied with barely acceptable levels of autonomy.

In the United States, policymakers talk a lot about giving autonomy to schools that stops at the district or administrative level and often results in decision making that ignores the voices of educators and the community, says Finnish educator and scholar Pasi Sahlberg.

"School autonomy has often led to lessening teacher professionalism and autonomy for the benefit of greater profits for those who manage or own private schools, charter schools or other independent schools," Sahlberg writes here. "This is perhaps the most powerful lesson the US can learn from better-performing education systems: teachers need greater collective professional autonomy and more support to work with one another. In other words, more freedom from bureaucracy, but less from one another."