Teacher Voice Problems Are an Occupational Hazard. Here's How to Reduce the Risk.

On average, teachers are more than twice as likely as non-teachers to have voice problems and three times more likely to see a doctor about the issue. 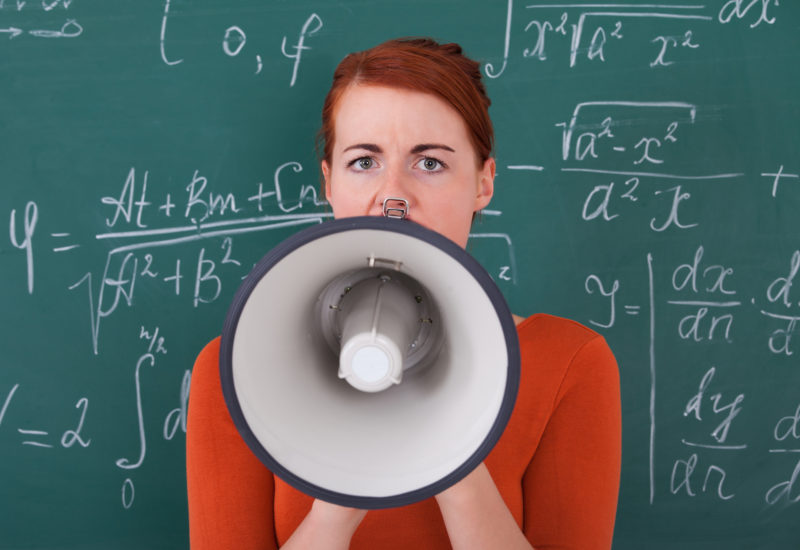 Teaching a class of fourth graders takes a toll, and North Miami Elementary School teacher Amanda Smith sometimes pays it with her voice. She lost her voice twice over the 2015-2016 school year, once in November and again in late spring.

“It was something else trying to ‘yell’ at field day,” she recalls.

For educators, voice problems are an occupational hazard. On average, teachers are more than twice as likely as non-teachers to suffer from this disorder and about three times more likely to see a doctor about the issue.

It’s not surprising, given the length of time educators have to talk each day and their need to project in large, noisy classrooms. Many go home hoarse and raspy, only to continue using their voices with their own families, cheering at after-school games, reading bedtime stories to young children, and, let’s admit it, nagging. (“Finish that homework, now!”)

Who is most at risk? Females ages 40 to 55, according to researchers. Women have smaller larynxes, or voice boxes, and their vocal cords vibrate more quickly. That’s compounded by the fact that female vocal chords, also called folds, are shorter and thinner than male vocal chords. Plus, the longer women have been in the classroom, the less protection they have against the accumulated strain.

It’s not uncommon for teachers to have about a million vocal chord collisions in a day, leading to vibration overdose.

“That’s a million little forceful collisions the vocal tissues have to endure, and as you get louder the intensity increases,” says Nelson Roy, a professor in the Department of Communication Sciences and Disorders at the University of Utah. “The loudness is most toxic. If we can do something about the loudness, we can resolve many educator voice disorders.”

It’s true that many educators may find themselves raising their voices (ahem, yelling) at disruptive students, but much of the time they have to speak loudly enough to project over background noise. Schools can be noisy places, and acoustics weren’t always part of the design.

“If you can be attached to some sort of speaker system – like a headset with a fanny-pack style speaker worn on your waist – it can lower the need to speak loudly,” he says. “Our research shows that teachers who amplify with speakers, which can cost as little as about $100.00, will derive significant benefit.”

Teachers are more than twice as likely as non-teachers to have voice problems and about three times more likely to see a doctor about the issue. Who is most at risk? Women ages 40 to 55.

Taxpayers will also derive a significant benefit. According to research from the University of Utah, societal costs associated with teacher voice problems totals $2.5 billion annually. Nearly 600,000 U.S. teachers miss at least one day of work per year because of their voice problems. When teachers miss work, substitutes have to be hired. But even when they are in class, their ability to deliver instruction is diminished because of their voice problems, which impacts learning. It’s a problem called “presenteeism.” The educators are present, but not fully capable of using one of their essential tools of the trade – their voice.

“We found that educators are modifying what they’re doing to accommodate their voice problems by reducing their activities or their interactions with students. We found that 18 percent of teachers do this at least five times a day when they experience voice problems,” says Nelson. That’s a large number. To ignore this problem would be very costly.”

While amplification is the best solution, there are other ways educators can minimize the effects of all those vocal chord collisions.

Give Your Voice a Break

Take rest periods during the day to give your voice a breather. Give students a quiet seat assignment or ask them to do presentations so you aren’t the one talking. Try to facilitate discussions rather than leading them, which is good practice anyway. If you can get a break during lunch, enforce a “no talking” rule while you eat.

Students get noisy and a little rambunctious and suddenly it’s classroom chaos. We lose our patience, and we yell. Instead, try doing the opposite – stop talking and remain silent until the class settles down. Clap your hands, or turn off the lights as a way to get their attention. In other words, use non-vocal signals.

Drink lots of water! Keep a water bottle handy, and keep taking sips even as you move about the classroom. Vocal folds need a thin layer of mucus to vibrate, but they can dry out in dry environments like a typical school building. And as your vocal chords dry out, it requires more effort to talk and project, exacerbating your voice problems.

Background noise is not only harmful to educator voices, it interferes with students’ ability to hear and understand what’s being said. If your classroom has a loud ventilation system, ask about ways to make it quieter. If there’s hallway noise, keep your door closed. Learn about classroom acoustics and how to improve yours, and then advocate for a better teaching and learning environment.

1. Unoccupied classroom levels must not exceed 35 dBA (This is about the equivalent of a quiet room fan.)
2. The signal-to-noise ratio (the difference between the teacher's voice and the background noise) should be at least +15 dB at the child's ears. (If the ratio is too high, students can’t distinguish speech from noise.)
3. Unoccupied classroom reverberation must not surpass 0.6 seconds in smaller classrooms or 0.7 seconds in larger rooms. (Excessive reverberation can result from too many hard, reflective surfaces in the room.)

Compliance with the ANSI standard is voluntary but many school districts and state and local agencies have adopted the standard as a part of their construction or renovation requirements for schools.