Right-wing lawmakers say they are only trying to protect students from indecent materials. Or are they just trying to discredit public school educators?

Would an English teacher dare open up Toni Morrison's Song of Solomon, Mark Twain's Huckleberry Finn  or J.D Salinger's A Catcher in the Rye if there was any possibility that a policeman could darken her classroom doorway clutching an arrest warrant? The charge: distributing “harmful materials to minors.”

Probably not, but where in the United States are educators accused of a crime merely for teaching literary classics? Nowhere yet, but if a state lawmaker in Kansas gets her way, educators there may soon be running afoul of the law unless they revise their curricula.

Meet State Senator Mary Pilcher-Cook, the lead sponsor of controversial legislation  moving through the Kansas Legislature that could lead to the prosecution of teachers who expose students to course materials that some may find harmful or offensive.

“Pornography and obscene materials are becoming more and more prevalent in our society," says Pilcher-Cook. "It is all too common to hear of cases where children are not being protected from the harm it inflicts."

But what does that have to do with educators? 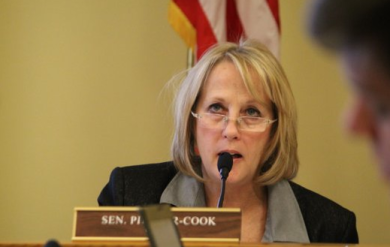 It all started in 2013 when a parent heard about a sex education poster that was pinned up on a wall at a middle school in Johnson County. The poster contained information that could easily be considered inappropriate, so the parent filed a complaint with the district and the teacher was disciplined. But the parent wasn't satisfied and Pilcher-Cook took up the cause by sponsoring Senate Bill 56.

What the bill essentially does is strip educators of  the "affirmative defense" protection that exempts them from prosecution under an existing morals statute. If SB 56 becomes law, only college and university professors would be protected by this clause, and public school teachers could be charged with a Class B Misdemeanor. This means up to six months of jail time or a fine up to $1,000.

And what exactly constitutes "harmful" content? According to the bill, such material contains a "description, exhibition, or presentation ... in whatever form ...of nudity, sexual conduct, sexual excitement, or sadmomasochistic abuse."

But then there's this provision: material that any "reasonable person" believes has no "serious, literary, scientific, educational, artistic, or political value" could also be targeted.

A "reasonable" individual, presumably, is state Rep. Joseph Scapa, who told The Kansas City Star that a novel by Toni Morrison is "pornographic.”

It's no wonder that teachers in Kansas might be deeply worried about what type of content they can and cannot show their students.

“I don’t know of a novel that I could teach that wouldn’t cause you to be offended in some way,” high school English teacher Michelle McClaine told WDAF-TV in Kansas City.

"If I’m a parent and I feel like my child was going through a Judy Blume book or even a Harry Potter book and looking at 'inappropriate' content, ostensibly the district attorney could choose to take that case and clap that teacher in irons," explains Marcus Baltzell, spokesperson for the Kansas National Education Association (KNEA). "We live in a democracy where free exchange of ideas and discussion is encouraged and so this one incident threatens to put a blanket of censorship over the entire state." 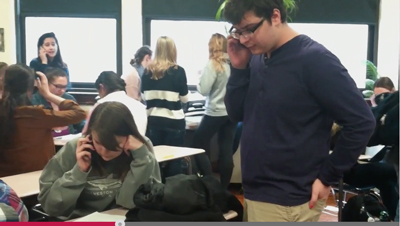 KNEA is strongly opposed to SB 56 and has joined a coalition of organizations, including the Kansas American Civil Liberties Union, to lobby lawmakers and stop the measure in the House, where it it is now being considered after the senate approved the bill last week.

Also actively involved are students, who have taken to social media to rally opposition to SB 56. At Wichita East High School, students spent a recent lunch period calling, texting and e-mailing lawmakers urging them to vote against the bill.

Even if the House rejects the legislation, the impact of even considering such action is alarming, says Dr. Micah Kubic, executive director of the ACLU of Kansas.

"A similar bill was introduced last year and there were some anecdotal reports about the effects in classrooms," Kubick says. "But certainly if nothing else, even to repeatedly have legislation like this has a chilling effect itself. There's jail time looming over [teachers'] heads. So long as someone somewhere regards [classroom materials] as offensive, it’s a threat."

Despite widespread opposition - and national media coverage - the bill has a decent shot at becoming law. The legislative process is moving quickly and educators have been put in the position of addressing a problem  - pornographic materials blanketing the state's schools - that doesn't even exist.

Baltzell believes the real agenda has actually very little to do with protecting students'  morals. Pushing divisive, hot-button social issues distracts the media and public from the state's fiscal crisis and the budget cuts that have decimated public education. And if educators are cast as defenders of indecent materials, all the better.

"Educators have been on the front line fighting Governor Brownback's agenda," Baltzell says. "The goal of a bill like SB 56 is to vilify public schools and discredit our teachers. Ultimately it's about political payback."