Teachers of the Year Head to the Border

In February, a network of Teachers of the Year, appalled by the conditions of immigrant children held in government detention centers nationwide, gathered at the U.S. border to conduct a teach-in and to call for the end of the separation of families. 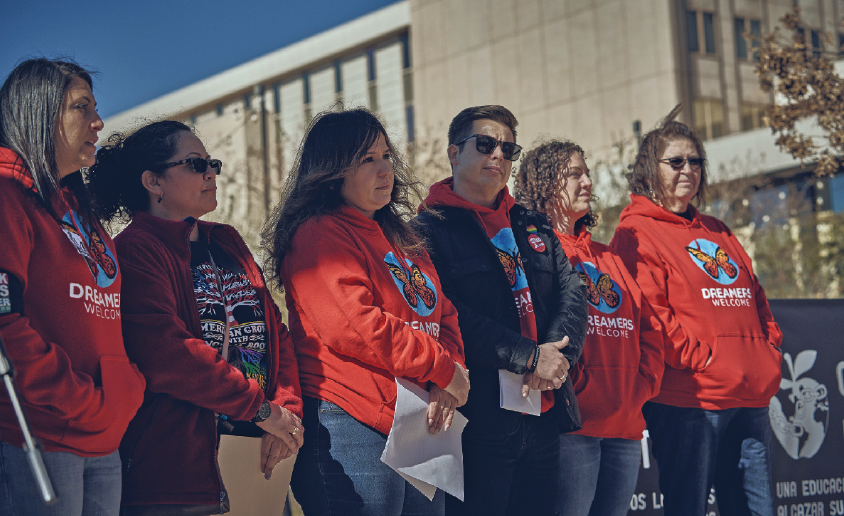 We have a moral and professional responsibility to protect children

As educators we are mandated reporters of suspected child abuse, and what is happening to thousands of children in our nation right now is that. It’s abuse. They are being incarcerated in detention centers across the U.S. simply because they were not born in our nation.”

This is what the 2018 National Teacher of the Year, Mandy Manning, a member of the Washington Education Association, told NEA Today moments before the start of a daylong teach-in which brought educators from Alaska to New Jersey to the U.S. border.

The “Teach-In for Freedom,” held in February in El Paso, Texas, was organized by Teachers Against Child Detention, a network of Teachers of the Year and other educators appalled by the conditions of immigrant children held in government detention centers nationwide. NEA has called for an end to the separation of families and supported the teach-in.

More than 12,000 children who have arrived to the United States fleeing dire conditions and violence in their home countries, are in custody of the U.S. government. They are primarily unaccompanied minors detained at the U.S. border or children forcibly separated from their parents.

In fact, a recent Justice Department report cites more than 4,500 complaints of sexual abuse, including allegations of harassment, fondling, voyeurism, and rape by staff at different detention centers. The office of the Inspector General of the Depart- ment of Homeland Security has issued at least three reports detailing the mistreatment of the children, and several Immigration and Customs En- forcement agents have been arrested for abusing children in custody.

These reports—and for some educators the first hand experiences of their students who have been through these detention centers— motivated teachers like Robert Varela Rodriguez, who traveled from California, to join with other educators for the nine-hour teach-in, which was livestreamed and followed nationwide.

Rodriguez, a special education teacher who is also an NEA executive committee member, told NEA Today, “We have a moral and professional responsibility to nurture, educate, and protect, especially innocent immigrant children.”

“When they come to our country, they belong to all of us. The Trump administration must stop this inhumane practice of separating families and incarcerating and criminalizing immigrant children,” he added.

The son of Mexican immigrants, Rodriguez feels that if he had been born in a different time, he could have been one of those children. Some

of the lessons presented during the teach-in focused on the nation’s long history of forcibly separating children of color from their families. Topics included the enslavement of Africans, 19th Century boarding schools which were created to force Native American children to turn away from their culture, and the forced deportation of Mexican Americans in the 1930s.

The teach-in also addressed the violence and despair in countries such as Honduras, El Salvador, and Guatemala as factors that cause entire families to flee.

WE ARE THE VOICE

In 1980, Sarahí Monterrey was about to be born in war-torn El Salva- dor. To avoid being shot, Monterrey’s mother and grandmother made the trek to the hospital carrying a white flag. When Monterrey was one, the family fled to the U.S.

“The consequences of that war are still being felt today. Violence, organized crime, extorsion,” explained Monterrey, a 2019 Teacher of the Year from Wisconsin. She arrived in El Paso determined to raise her voice and hopes others will join in.

“We are a voice for children. If we aren’t going to speak out, then who will? A lot of people don’t realize that these children are still being detained,” she added.

Throughout the day, educators shared history lessons, student poems, music, art, and firsthand experiences. They hope other educators will use their lesson plans to build awareness and make a call to action in their own communities.

The teach-in is a first step to demanding an end to child detention. The educators plan to continue using their “teacher voice” to call attention to this issue, and to encourage other educators to organize.

“The inhumanity of what is happening to children and their families as they are legally seeking asylum in the most welcoming country in the world is appalling,” says Noel Candelaria, a high school special education teacher and the president of the Texas State Teachers Association.

“As teachers we are to welcome children in our classroom. It’s time that we speak up for our kids because they can’t. We demand they are treated with dignity and respect.”

They are demanding the children be released, and be guaranteed the “fundamental protections of due process, equal protection and the right to human dignity, physical integrity, and freedom from abuse or use of force by authorities.”

“I am honored to learn from immigrant voices each day in my classroom,” said Jinni Forcucci, 2018 Delaware Teacher of the Year.

“If the people in this nation are to understand the impact of these deten- tion centers, of this wall, of the hurtful rhetoric, that injures and belittles, then we must—as teachers, as educators, as humanitarians—welcome the immigrant story and embrace the storyteller,” the high school English teacher added. “All children are heard, treasured and encouraged to follow their dreams.”