According to a separate study, the CDC found that among young girls, ages 15 to 19, the suicide rate doubled from 2007 to 2015, its highest point in 40 years.  The suicide rate for boys increased by 30 percent over the same time period.

The numbers are staggering and profoundly disturbing - and probably a shock to most people, including those who may already be aware of the "suicide clusters" that shook schools and communities such as Palo Alto, CA.

Untreated mental health conditions are among the leading causes of suicide, and this alarming increase is more proof that young people are an increasingly vulnerable group when it comes to mental health, say experts.  Teen depression rates are on the rise, yet obstacles prevent students of all age groups from getting the help they need.

Experts cite a number of reasons why teens are so susceptible. Bullying, academic pressure, family problems, and social media are all risk factors.

"Honestly, I’ve had more students this year hospitalized for anxiety, depression, and other mental-health issues than ever,” said Kathy Reamy, school counselor at La Plata High School in southern Maryland and chair of the NEA School Counselor Caucus. “There’s just so much going on in this day and age, the pressures to fit in, the pressure to achieve, the pressure of social media. And then you couple that with the fact that kids can’t even feel safe in their schools—they worry genuinely about getting shot—and it all makes it so much harder to be a teenager.”

Too many schools have become pressure cookers, says Denise Pope of Stanford University.

“I’ve spoken with many kids who tell me, ‘I’m studying as hard as I can and my parents are saying I just need to study harder.’ These kids stay up all night and focus 100 percent on schoolwork to get ahead,” Pope says. 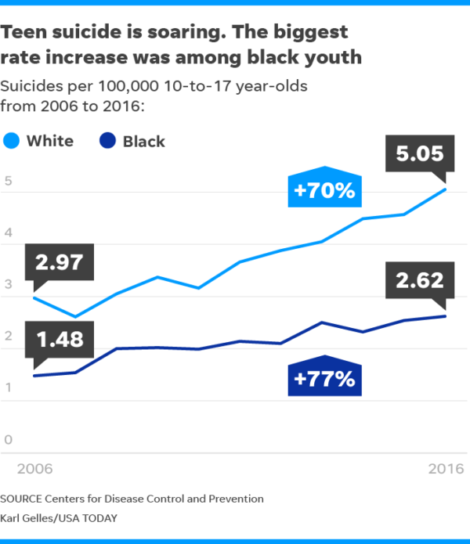 Many students don't want to disappoint their parents, adds Reamy. “It’s so hard for the kids who are already maybe perfectionists, and they’re getting the first B in their lives and they’re fearful it’s going to prevent them going to college, any college, never mind their dream college," she explains.

LGBTQ students face a particularly high suicide risk. In 2017, researchers analyzed the 2015 National Youth Risk Behavior Survey and found that 40 percent of high school students who identify as gay, lesbian or bisexual or questioning, -- were seriously considering suicide. Transgender youth - not included in this government survey - is a group that is clearly just as, if not more, vulnerable to the same risk factors, according to research.

Although the increasing teen suicide rate is a national crisis, much of the media spotlight has been focused on California. Surveys have shown that one in five students in the state had seriously considered attempting suicide in the past year. Futhermore, suicidal thoughts are generally most prevalent among female students and among students from multiracial, Native American and Pacific Islander backgrounds. Males, however, account for three out of every four suicide deaths.

According to Kids Data, nearly two out of three counties in California had at least one person between ages 5 and 19 die by suicide in 2013.

Palo Alto has a teen suicide rate more than four times the national average. This affluent community with high-achieving schools saw 10 teen suicides over seven years — six during the 2008-09 school year and four in 2014-15.

Charles Shannon is in his 29th year of teaching in Orinda, another high-performing district about 40 miles northeast of Palo Alto. He sees similar trends at his school.

"There are lot of pressures. Teachers and parents all want students to achieve but we are all seeing signs of stress, substance abuse, addiction," say Shannon. A vocal advocate for creating friendlier and safer  environments for LGBTQ students, Shannon stresses the importance of strong anti-bullying programs but also a more inclusive curriculum.
NEA School Crisis Guide
Knowing what to do in a crisis can be the difference between stability and upheaval. A new step-by-step resource created by educators for educators can make it easier for all educators, including union leaders, school district administrators, and principals, to keep schools safe—before, during, and after a crisis.
California is taking action to help safeguard the health and wellbeing of teenagers across the state. In 2013, the legislature passed AB2246 , a law that requires all public school districts and charter schools serving students in grades 7-12 develop a suicide prevention policy.

The law mandates that these new policies be in place by the 2017-18 school year and must be developed in consultation with school and community stakeholders, school-employed mental health professionals, and suicide prevention experts. The policies must provide strategies and guidelines and resources, not only to address suicide prevention, but also intervention and postvention. (A model school youth suicide prevention policy can be found at the California Department of Education’s website: http://www.cde.ca.gov/ls/cg/mh/index.asp.)

The Heard Alliance, a community alliance of health care professionals in the San Francisco area, released a comprehensive resource that serves as the implementation tool for AB2246. The "Toolkit for Mental Health Promotion and Suicide Prevention"  is designed to support school communities - parents, teachers, school personnel, counselors and health providers - in improving the well-being of their students. Originally published in 2013, the resource was updated in 2017 as schools began to deisgn their suicide prevention policies. Users can find a wide variety of tools. Although created to support suicide prevention in California, any school in any district in the nation can find valuable and accessible information in the guide.