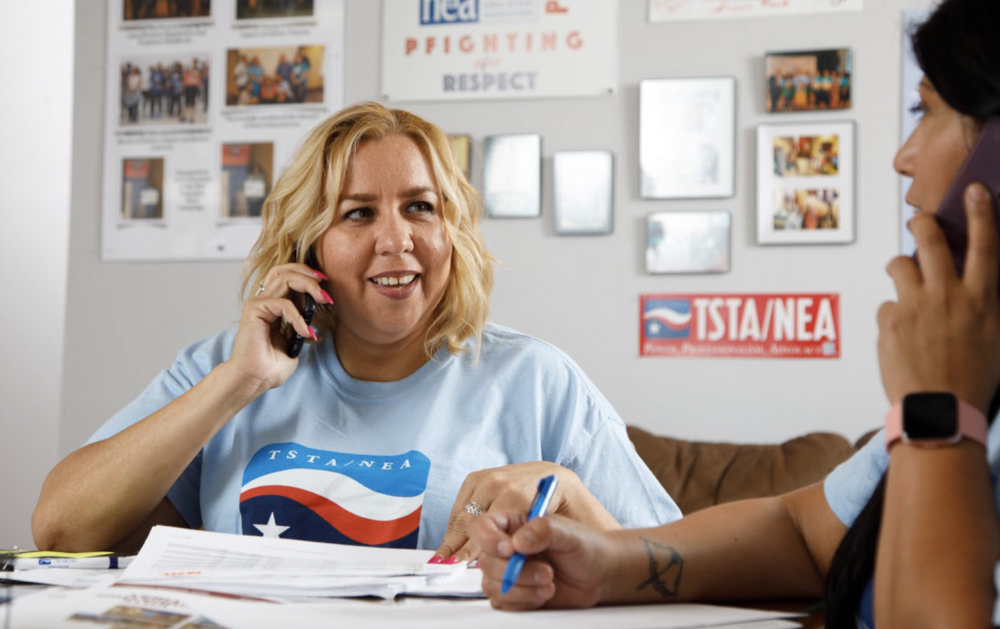 Debbie Reyes is a strong voice for her fellow ESPs (photo: Kimberly Davis)

After a year of speaking up, attending school board meetings, circulating petitions and gathering hundreds of signatures, the paraeducators and other education support professional (ESP) members of the Pflugerville Educators Association (PfEA) have notched their first victory.

Across-the-board, 5 percent pay increases for Pflugerville ESPs—equivalent to roughly $1 an hour—were approved by school board members in late 2019. At the same time, ESPs also won base-pay minimums for paraeducators ($13 an hour) and school bus drivers ($20 an hour, plus childcare), plus an additional raise for special-education paraeducatorss. Bus drivers also were rehired by the district as public employees, after their jobs previously had been privatized.

It’s a huge step forward—and Pflugerville ESPs say they’re gratified to see how their voices have been heard. But it’s still not enough. Even with these raises, many Pflugerville educators still struggle to pay for basic living expenses, including health care.

Recently, when paraeducator Debbie Reyes left school with a blazing headache and too-high blood pressure, she went straight to an emergency room for evaluation. She left with a co-pay bill of $500. Add $400 for a medical scan in November, plus the monthly $200 price tag for medications to manage diabetes, and her medical bills quickly surpass $1,000.

Now consider her take-home pay for working in a special education classroom with non-verbal students with severe sensory and behavioral challenges—and currently no certified teacher. Reyes puts together lesson plans, handles the toileting of students who can’t take care of their own basic needs, and contributes to the completion of required paperwork.

After doing this essential work for 14 years, Reyes takes home about $1,600 a month, or less than $20,000 a year. One saving grace, she says, is that she qualifies for income-based, public housing, which costs about $1,000 a month. But she also has to afford food, gas, utilities, and the rising cost of living in Pflugerville, part of the trendy and growing Austin metro area. At one point, her church family had to help her pay her electric bill.

Plenty of her colleagues work second or third jobs, or qualify for food stamps. Many earn less than Reyes, whose tenure puts her among the “highest earning” of Pflugerville’s paraprofessionals. “Every single one of our ESPs is critical to the success of our students and they shouldn’t have to worry about paying for groceries or making rent,” PfEA President Cindy Maroquio has said. “Everybody matters, every job matters, and they all deserve to have a living wage income.”

There’s more work to do, PfEA members say. “We’re still fighting,” promises Reyes. In 2019-2020, the goal is an additional $2 an hour for all Pflugerville ESPs, plus due-process for ESPs to be embedded in the board’s policies.