While 6,000 Washington educators remain on the picket line, nearly 33,000 teachers in Los Angeles are prepared to strike. 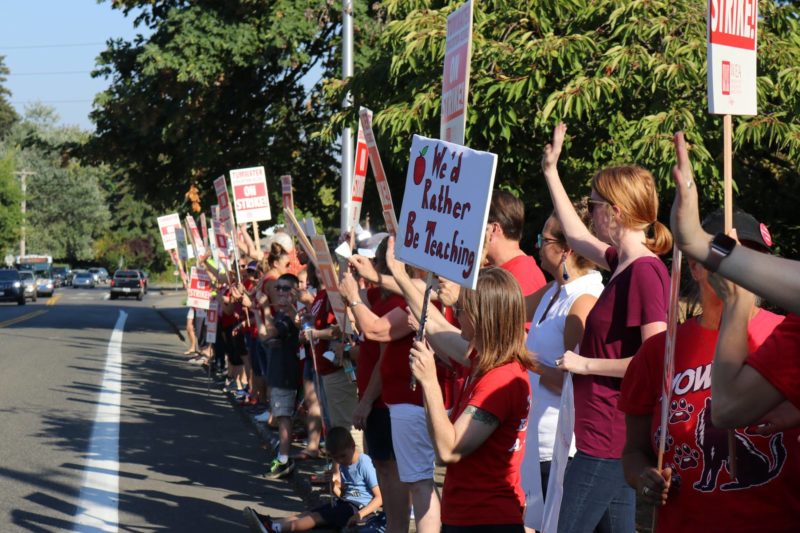 The #RedforEd movement reached Washington state with such fervor that it drew onto the picket line nearly 6,000 Washington Education Association (WEA) members in the western part of the state. All strikes are over now, with Tumwater reaching a tentative agreement late Sunday night.

Overall, 15 locals were on strike in western Washington. In recent weeks, thousands of other educators throughout the state have reached tentative agreements that come with significant pay raises, aimed at keeping the best trained educators in their schools.

The issue at hand? Superintendents and school boards refuse to negotiate competitive pay raises for teachers and education support professionals despite the state Supreme Court ordering it, the state legislature funding it, the governor signing it, and parents supporting it.

What’s happening in Washington has been bubbling for at least a decade in what is known as the McCleary Decision, when two families and several groups—including school districts, parent organizations, local education associations, and WEA—sued the state for not meeting its constitutional duty to adequately fund public schools.

In 2012, the state Supreme Court ordered the state legislature to fully fund K-12 public schools. The state recently met its obligation by adding approximately $8 billion to the K-12 budget. Of the $8 billion, $2 billion was identified for teacher salaries that are to be allocated via collective-bargaining agreements.

‘Keep Great Educators on the Job for Our Students’

For Washington educators, the McCleary Decision is a generational realignment of educator pay that will now level their salaries with other college-educated workers and will provide that competitive pay required to keep them in the profession.

"This is a much-needed generational realignment of pay for educators—both teachers and ESP members,” says Kim Mead, president of WEA. “New competitive and professional salaries will help attract new people to the profession, and keep great educators on the job for our students."

And the public agrees that educators should be paid more. Results from the new 2018 Phi Delta Kappan Delta Poll of the Public’s Attitudes Toward the Public School show that two-thirds of Americans believe teacher salaries are too low. It should also be noted that 78 percent of public school parents support teachers in their communities if they went on strike for more pay.

And yes, while it’s true that most educators decide to enter the profession because of a desire to work with children, it’s also true that to attract and retain a greater number of dedicated, committed professionals, educators need salaries that are attractive and allow them to support themselves and their families. Otherwise, low teacher pay comes at a very high cost.

Educators across the country have long felt the pain of statistics like these. NPR recently reported how the 2016 teacher of the year left his home state of Oklahoma for Texas where the pay was higher. While Texas now has a highly qualified teacher, Oklahoma has lost one—and this hurts everyone: students and their families, the community, and educators.

The teacher exodus is a crisis in many places, including Washington, which has been reported to have a shortage of substitutes, and a need for teachers who can teach specific subjects.

A  report by the Office of Superintendent of Public Instruction reveals that in 2016-2017 school year, 61 percent of principals indicated they had to cover a classroom because there were no substitutes available while 74 percent of human resource directors said the challenge of finding qualified certificated teachers was greater than compared to the previous school year.

The McCleary Decision helps to reverse this downward spiral. “But it’s not a done deal; those funds still have to be bargained by every local association in the state,” said Mead to a local news outlet.

And that’s where the union comes in.

The role of WEA and its members has been paramount, leading much of the efforts since the beginning of the McCleary trial. In early 2000, for example, WEA members agreed to increase their dues to pay for the expenses related to the lawsuit, as well as help fund the formation of a coalition that helped support a victory in the McCleary Decision.

Members were relentless in making sure public education would be funded. Many organized their own education town halls or participated in town halls held by legislators. They responded in multitude to WEA action alerts, from showing up in person to events to writing postcards, sending emails, and making phone calls.

And before the #RedforEd walk outs in West Virginia, Kentucky, Oklahoma, Colorado, and Arizona, more than 50 percent of WEA members were participating in one-day rolling walk outs in 2015.

Washington’s Chad Donohue, a teacher at Park Place Middle School in Monroe, penned for NEA Today why he walked out, naming a host of reasons that include his students and their right to creative opportunities, because of high-stakes testing, and for new teachers who start at $34,000 a year despite having a higher education degree, huge student debt, and high costs of living.

“I walked out so our legislators would wake up,” he wrote.

And now 6,000 Washington educators want to wake up superintendents and school board officials by remaining on the picket line, donning #RedforEd t-shirts, in hopes of successfully negotiating their contracts.