TikTok Opening a Window into the Teaching Life

Videos posted by teachers to TikTok, a wildly popular social media app, have been viewed at least 5 billion times. They are finding fun, new ways to talk about their profession while also offering teaching tips, student-teacher connections, and more. 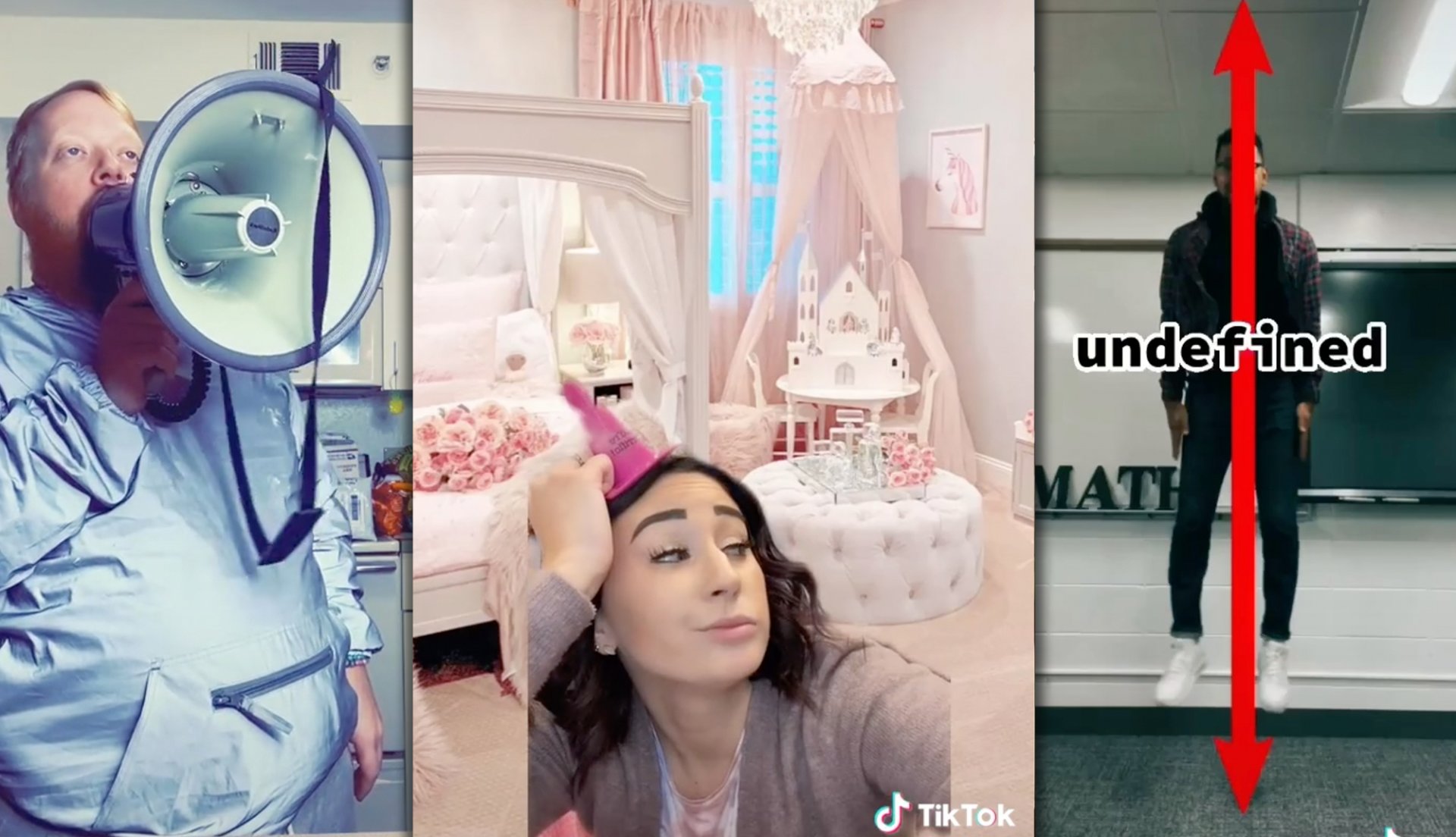 Videos posted by teachers to TikTok have been viewed at least 5 billion times. More than 12 million have watched Ohio teacher Lauran Woolley as she caws — literally caw-caws — for her fifth graders to return from recess. More than 27 million have watched Florida high school teacher Casey Hamilton, a beam of positivity, in a “duet” video with Lizzo.

While some educators get “TikTok famous,” and even make money while doing it, most #teachersoftiktok are simply having fun. Some are sharing teaching tips and improving their practice. Most say they got into it to connect with students in new ways — something that has become especially valuable during the COVID-19 pandemic, as educators work harder than ever to build relationships with students.

“I started [TikTok] for my kids, to engage with them, just to have conversations with them,” says Chicagoland middle-school teacher Diego Marin, 27, a.k.a @Mr.DMarin. “It’s about re-creating those non-instructional moments that we usually have during the day.”

At the same time, the videos also are opening a window into the teaching life for non-students and non-educators. These past months, TikTok’s 850 million active users see the jaw-dropping lengths that educators are going to connect with students during the pandemic, even when they're not in the same physical space.

See, for example: Washington teacher Mackenzie Adams, as she works to engage her on-screen kindergartners with exaggerated facial movements and vocal dips. Since being featured on the New York Times, Adams’ TikTok video has been viewed more than 14 million times.

Where the Kids Are

More than a third of TikTok’s users are estimated to be 14 or younger, according to an August report of company data.

“The reason I downloaded the app was because it was this thing with the kids last year, and a lot of teachers were frustrated that it was a constant going-on at school,” recalls Florida eighth-grade teacher Martha Stewart, 27, who posts at @missstewsroom. “But when I started looking at it, I thought it was actually a pretty positive thing for the kids to do. They’re creating content — actually creating something — as opposed to other social media where they just talk about themselves.”

“There are so many useful things I’ve learned, ideas for my classroom, fun things to do with students,” says Lauran Woolley. “I’m a very visual learner, so seeing those things take place has made me a better teacher.”

So, Stewart dove in and wrote and recorded “The Eighth Grader Anthem” in March, a 45-second ode to Vans and wrist scrunchies, hoodies and HydroFlasks.

Since then, Stewart’s videos have become a topic of conversation with her students, which has fostered new connections with them. “It allows my kids to feel like they have a deeper relationship with me,” says Stewart.

Finally dropping this gem in honor of being virtually reunited with my kiddos tomorrow. ##missyou ##teacher ##tiktokteacher ##MoodBoost ##ultrasmoothmoves

Arizona high school history teacher Dustin Williamson, 27, has had a similar experience. “Back in February, right before COVID started, TikTok was taking off and it was all that my students were talking about,” says Williamson, a.k.a. mr_williamson23. “So I downloaded it to find out what it was all about, scrolled down for like 3 hours — and it was like ‘holy crap, now I’m addicted!’”

Williamson told his students, “you know, I think I could do this,” and they told him, “yes, you totally could.” (For proof that his students made the right call, see Williamson’s “What Kind of Teacher Am I?” video, viewed more than 3 million times.)

“My students support me. They follow me on the app. It’s been a great way to build relationships with them,” he says.

Williamson and other TikTok teachers say their administrators also are supportive. In the absence of district policies about TikTok, they use common sense — no profanity, no participation in risque dances, etc. Administrators are encouraging teachers to find ways to connect with students, teachers say, and they see that this is effective.

In addition to building teacher-student relationships, some teachers are using TikTok videos as teaching tools, especially during virtual learning.

While explanatory videos aren’t new, students often don’t have the patience for an 8- or 10-minute YouTube video, says Marin. So he posts short, simple instructional videos where his students will watch them — on TikTok.

Many teachers are learning from other teachers on the app, whether it’s how to teach an algebraic concept or what to do with your Halloween bulletin board. “There are so many useful things I’ve learned, ideas for my classroom, fun things to do with students,” says Woolley. “I’m a very visual learner, so seeing those things take place has made me a better teacher.”

This has been especially helpful during the pandemic, “when we’re all like new teachers,” says Williamson.

Marin also is trying to model something for his students — and that’s the spirit of trying something new, something he’s not that comfortable doing. Unlike Woolley, a former speech and debate kid, or Stewart, who loves a creative project, Marin doesn’t love the camera. “I told my kids, ‘it takes a lot for me to get in front of a screen!’ But I want to model for the kids that they can try new things and get out of their comfort zones," he sayd.

For Florida’s Hamilton, who went viral after Lizzo posted a “duet video” of him and now has a whopping 5.1 million followers, the videos also model his social-justice values and he posts about being anti-racist and supporting Black Lives Matter.

By providing an authentic window into the teaching life, the videos may even inspire future teachers. “I’ve had people contact me and say that because of my ‘Day in the Life’ vlogs, they want to become a teacher,” says Woolley. “I never expected that from those videos and it’s awesome.

“Even some of the brands that I work with are like, ‘we love what you do, and we love what you do for your students,’” says Woolley. “It definitely has helped to shine a light on what teachers do, even the little things we do.”

Woolley, 26, has 2.7 million followers on TikTok. When she posts videos from her classroom —a “day in the life” diary entry or one of the hysterical “What I think it’s like to teach kindergarten” series — they get hundreds of thousands of views.

Her followers watch as she stows her frozen lunches or scrambles to relocate “Corner Jim,” her stuffed-animal classroom mascot. They see her at recess, wearing a mask and listening to a fifth grader explain how he’s performing weddings on the playground. Viewers find out what her kids want her to be for Halloween — a stack of pancakes?!

For Woolley, the millions of views into her teaching life are adding up, cha-ching! Her TikTok income, provided through sponsor contracts, is helping her and her husband to build their first home. Her current sponsor? Not hard to figure out if you’re a follower of her videos — it’s Bang Energy, the drink that fuels her early mornings.

Woolley and others also have been able to access the $200 million TikTok Creator Fund, which TikTok set aside this summer to pay users for videos that they’re creating. (The fund is only for users over the age of 18 with a minimum number of followers and views.)  And last summer, she was invited to a Teacher Hype House in San Francisco, a place where Woolley and other TikTok teachers posted videos together.

When Woolley first started teaching — not that long ago — she was working four jobs, coaching speech and debate, working in a restaurant, and doing what it takes to make ends meet on a teaching salary. (“And people wonder why nobody wants to get into teaching? It’s sad!” she says.) So, she’s not going to lie, the extra money does help.

But it’s not why she creates TikTok videos.

“Even if I wasn’t making the money I’m making off TikTok, I’d still do it. I like that my students can see me as a real person. I don’t really hide anything about my life on there — so they get to see who I am, what I believe in.”