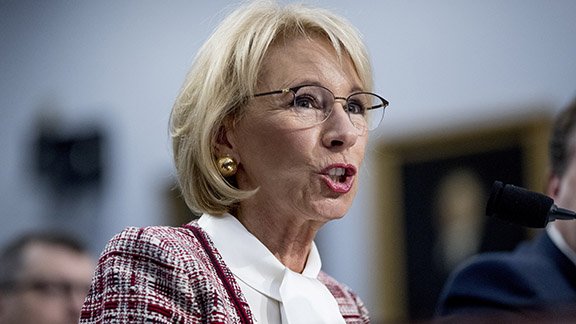 With her new changes to Title IX rules, which include provisions to allow for accused rapists to cross-examine their victims, Education Secretary Betsy DeVos has made schools and campuses more dangerous for girls and women, educators and advocates say.

Many agree, including former Vice President Joe Biden, who said the new rules aim to “shame and silence survivors,” and promised he would put a “quick end” to them as president. “Survivors deserve to be treated with dignity and respect, and when they step forward they should be heard, not silenced,” said Biden, whose wife, Jill Biden, is a longtime college educator and NEA member.

DeVos first published her proposed rewrite of the federal rules enforcing Title IX, the landmark law that prohibits sex discrimination in public education, in 2018. It generated more than 124,000 public comments to the Department of Education, including thousands from NEA members who decried the changes as dangerous.

Last week, on May 6, the final regulations were published. Now school districts, colleges and universities must comply by August 14.

From the start, NEA has denounced DeVos’ changes to the regulations, and its objections were made part of the formal record through a detailed, 12-page letter sent to ED. One major objection has to do with DeVos’ redefinition of sexual harassment as “severe and pervasive.” Pervasive means victims must suffer repeated incidents of harassment before they have a Title IX complaint. It’s a stricter definition of harassment than the one used by the Equal Employment Opportunity Commission to protect adult workplaces.

As a result, “a 6-year-old now must endure more extreme levels of harassment before she has a visible complaint under Title IX than a grown woman would have to tolerate to have a similar claim for workplace harassment,” Eskelsen García pointed out.

Another issue—with obvious, alarming consequences—is that the DeVos rules allow accused rapists to cross-examination victims and witnesses in live, trial-like hearings. “College students will have an understanding of what this adversarial process will be like,” said NEA attorney Keira McNett—and it’s not the trauma-informed process that NEA would like to see. In fact, it’s the exact opposite. Forcing victims of sexual violence to be interrogated by their attackers will worsen their trauma, advocates fear.

The likely outcome is that many survivors will simply choose not to report their assaults. This is what Carol Stenger, NEA member and director of the University of Albany’s Advocacy Center for Sexual Violence, predicted in her 2018 “Open Letter to Betsy DeVos About Campus Sexual Violence.” “As someone working on this issue for 25 years, I fear these changes will weaken sexual violence protections, create confusion and inequity, and increase the likelihood that survivors will not report. Two steps forward, three steps back,” Stenger wrote.

As it is, an estimated 90 percent of sexual assault victims on campuses never come forward, according to the National Sexual Violence Resource Center. “I observe daily how fearful students are to report or pursue charges,” Stenger wrote. And yet, “reporting is critical because survivors heal much better when they get support services.”

Other changes to the Title IX regulations include:

Making matters worse, as Eskelsen García pointed out, DeVos chose to release the new rules during an unprecedented time of anxiety. Educators already are worried about their students’ safety because of the coronavirus. And school districts and institutions of higher education already are coping with budgetary shortfalls.

“It is particularly egregious that the rule would come out during a global pandemic,” she said, “requiring schools to figure out how to implement complex new policies while operating with already sharply limited resources.”