Transgender Teacher: 'Being Trans Isn't Anything to Be Ashamed of'

Connecticut teacher Dusty Rader talks about his coming out and how his fellow educators across the U.S. can support their transgender students. 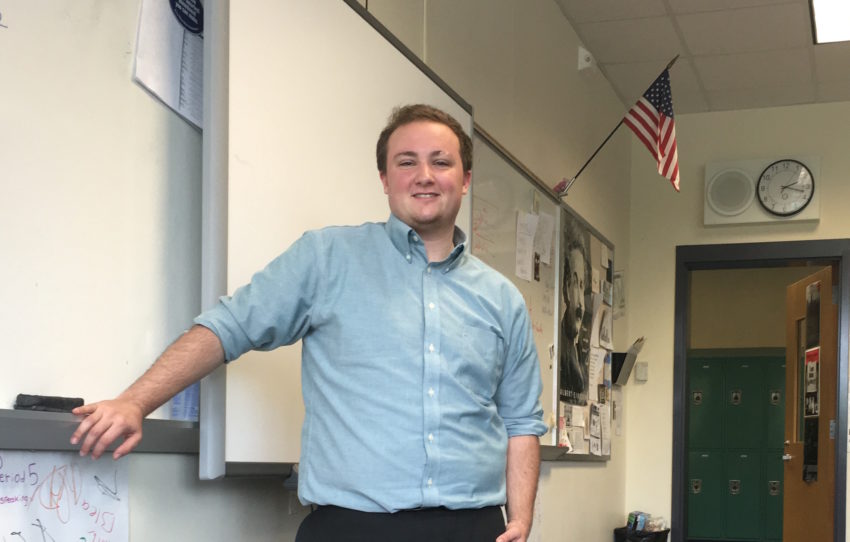 Last month, Connecticut teacher Dusty Rader had a “teachable moment” with his students at Avon High School in Avon, Conn. During a school-wide conversation about school climate and bullying, and talk of the recent North Carolina law that prohibits transgender people from using bathrooms that match their gender, Rader told his students that he is transgender. “I don’t think I have anything to hide from my students, and I don’t want them to think I do. My mantra is that being trans isn’t anything to be ashamed of.” Recently, Rader talked to NEA Today about his coming out, and how his fellow educators across the U.S. can support their transgender students.

So you recently made a very significant, personal announcement to your students. What prompted that discussion, and how did it go?

DR: My principal had been talking for a couple of days with the kids about bullying and school climate… I was listening to him, and thinking a lot of stuff is going on, especially in North Carolina. Also I was thinking I want to be open with the kids. I want them all to know that they can be proud of who they are. So I used his conversation about bullying to say that what’s happening in North Carolina is the work of bullies who haven’t been stopped, and that their bullying of trans people affects real people. In fact, it affects me!

For a lot of the kids, the thing in North Carolina wasn’t a tangible thing until I said something. One said he’d never thought of it as something that affected ‘real’ people until then. Of course a lot of them were like, ‘What? I never guessed!’

Tell us a little about your own experience as a student, coming out as a transgender man…

DR: I came out in November 2008, during my senior year of high school. I already presented as male, so what changed then was the language. My chosen pronouns became ‘he/him.’ For me, I had a lot of support, and I didn’t have much trouble. I was in a public school, Glastonbury (Conn.) High School, and I know there were definitely teachers there who would have stood up for me if I had problems. There were teachers who were like, ‘If that’s who you are, that’s who you are, and we’re going to support you no matter what.’

I had it really easy, but I know a lot of people who didn’t. I have a friend who dealt with a lot of bullying, name-calling, problems with the bathroom. Unfortunately, that’s still fairly common.

So let’s talk about those students who need more support…

DR: It’s not about the bathrooms. It’s about the person. Trans kids, like 80 percent of the time, are going through some really tough stuff. For me, I didn’t want to be trans. It sounded difficult. And it sounded confusing. And I didn’t want to deal with it. I went through a lot of depression about it, and every trans person I know went through the same depression, the same anger, and the same trying to avoid it. For adults to say [in these conversations about bathrooms], ‘how can we also avoid your identity,’ it really invalidates the kids.

Educators, I believe all of them, understand that their priority needs to be the student and the student’s well-being. If you’ve got a kid who doesn’t want to share a bathroom with a trans kid, you should tell that kid [the first kid] that there’s a private bathroom he can use. You can’t tell the boy, who is a boy, that he can’t use the boys’ bathroom. There is already so much that is so difficult in their world. There is already so much that kid is going through. Don’t add bathrooms on top of it.

I really try to emphasize to other teachers that this kid is going through a lot. Something like 40 percent of trans people will attempt suicide. There’s a lot of depression, there’s a lot of anxiety, and there’s a lot of self-harming.
Schools in Transition: A Guide to Support Transgender Students
To help educators and parents provide safe and supportive environments for all transgender students,the National Center for Lesbian Rights and Gender Spectrum, along with the HRC Foundation, the American Civil Liberties Union, and the National Education Association, recently produced Schools In Transition: A Guide for Supporting Transgender Students in K-12 Schools.
You have these conversations often with educators at other schools, and in other districts, who want to learn from your experience. What else do you tell them?

DR: The easiest thing to do? Call kids by their right names and pronouns. Treat them like normal kids, but also be open and be willing to talk. Looking back, I wish I had a teacher who would have regularly taken me aside and said, ‘hey, how are you doing? I know you’re going through a lot, and I want to make sure you’re okay.’

Ultimately it’s about being supportive and caring. It’s also about stepping in, and stopping the slurs. If you hear kids talking about Bruce Jenner, just say, ‘hey, it’s Caitlyn now.’ Teachers sometimes overlook that stuff, or they hesitate to stop and say something because they just want to move to something else, but it’s important to stop and say, ‘that’s not okay.’

How about your colleagues? How can your fellow educators be more supportive of their trans brothers and sisters?

DR: I don’t know if my colleagues knew [until a recent front-page story in the Hartford Courant publicized Rader’s coming out.] They probably heard mumblings. But I’ve had quite a few come up to me in the hallways and say, ‘Great job in the paper!’ which was cool. They’re very respectful. I almost feel like they’re worried about being disrespectful — but I’m very open. And I’m very willing to answer questions.

Before I came here, and when I interviewed for my next job [Rader is on a one-year-only term at Avon High] I came out to administrators. I basically said, ‘I don’t think this will be a problem, but I just want to be open about this.’ And I think that helps. The administration was like, ‘okay, that’s cool, we still want you to work here!’