They work, they get paid. Yes, they're employees—with the right to unionize. Help spread the word to the NLRB.
By: Mary Ellen Flannery
Share 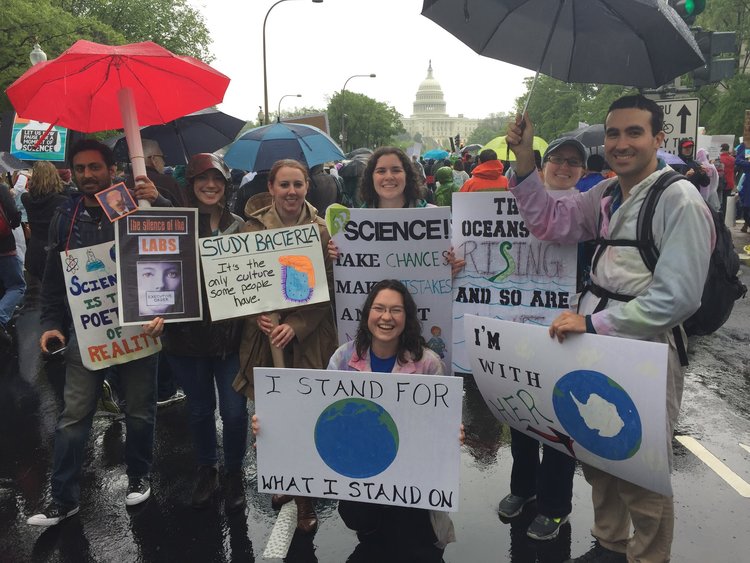 Members of the Graduate Assistants United at the University of Rhode Island rally during the March for Science in Washington, DC in April 2017.

Bobby Mermer teaches political science at the University of Florida (UF). In an online review, a UF student writes, “Mermer is a good guy, the class was difficult but rewarding.” Another says, “Great lectures and genuinely cares about his students.”

To any observer, including his students, Mermer is an employee of UF. Even as he completes his Ph.D., he teaches classes, grades student papers, holds office hours in an on-campus office building, and gets paid for this work.

And yet, despite the obvious nature of work like Mermer’s—he works, he gets paid—the Trump-appointed National Labor Relations Board (NLRB) said this month that it would seek to permanently forbid graduate employees, such as Mermer, from unionizing at private institutions. If approved, the new rule would supersede a 2016 NLRB ruling involving Columbia University that says graduate employees are, in fact, employees with collective bargaining rights, and that has inspired new unions on campuses across the nation.

“It’s pretty clear that some people didn’t like the 2016 decision and so, here we are, in a pretty bad situation, where people’s work may not be recognized for what it is. Unfortunately, it doesn’t surprise me, but it’s really, really not right,” says Danielle DiRocco, executive director of the Graduate Assistants United (GAU) at University of Rhode Island, a NEA-affiliated union.

As part of its rule-making process, the NLRB is required to invite and accept public comments about the rule. [To submit an online comment in support of graduate employees, click here.] Comments are due December 16, and more than 1,500 already have been submitted.

At the heart of the issue is this question: Do graduate employees work? Are they employees of their institutions? In previous legal briefs, NEA attorneys have illustrated that graduate employees, also known as research and teaching assistants, meet the common-law definition of “employees” and, as employees, have a right to unionize and collectively bargain.

Consider Leah Delaney, vice president of the GAU at Florida State University, an affiliate of the United Faculty of Florida (UFF). As the instructor of record for “Genre, Research, and Context: At Play with Composition,” a 2000-level writing course, and for “Intro to English Studies,” Delaney is teaching multiple times a week this semester, using a syllabus of her design. Additionally, she maintains office hours and takes her red pen to mountains of papers written by her roughly 35 students.

How Unions Help GAs, How GAs Help You

Some of Mermer’s students call him “professor,” but he prefers “mister.” His official title at UF is instructor. His colleagues in UF’s GAU, of which he is president, also teach classes, run research labs, and more. “Instructors, graduate assistants, research assistants, teaching assistants—they do exactly what faculty members do,” he says.

“They’re crunching data, writing white papers and academic articles, supervising lab work—all of these things that people do as full-time jobs,” says DiRocco. “These people are working their tails off—for you, for the world.”

In 2018, U.S. colleges and universities employed about 126,000 graduate assistants to teach classes, or do other teaching-related duties, according to the U.S. Bureau of Labor Statistics. They were, according to the 2019 NEA Special Salary Issue, paid an average of $17,261 annually.

Unionizing helps. Typically, when graduate employees sit down together at the bargaining table, they win increased wages, access to medical and dental benefits, as well as sick leave and parental leave, and reasonable working conditions, such as limits on the number of hours worked weekly. At UF, for example, per their collectively bargained contract, all graduate employees earn a minimum of $14,000 a year (compared to $10,000 at the comparable, but non-unionized University of Georgia) and work a maximum of 20 hours a week.

Unions also prevent exploitation by supervisors, notes DiRocco. On campuses without unions, she says, “you’ll consistently find grads in positions where their intellectual property is compromised, their working hours are out of control, and it’s often because of how a particular supervisor was treated in graduate school. It’s kind of a hazing thing.”

She adds, “There also are fantastic supervisors who need guidance and support to help their departments to more effectively support and help their grads.”

Currently, the Coalition of Graduate Employees Union counts 32 unions of graduate employees in the U.S., including more than a half-dozen NEA affiliates in Florida, Montana, Missouri, Illinois, and Rhode Island that represent more than 10,000 employees. It also points to about two dozen unrecognized, or currently organizing grad unions, including many at private institutions. Several of these incipient unions, including Yale and the University of Chicago, recently have withdrawn their petitions for recognition from the NLRB.

The current NLRB is not the same as the board that ruled in favor of graduate-employee unions in 2016. Since then, the Trump administration has appointed three board members. A fourth, the only remaining Obama-appointee, is serving a term that expires in December. The fifth seat is vacant.