Union Stands Behind Counselor Punished For Advocating For Students

"When members are bullied or threatened, it has a chilling effect on their ability to speak up for themselves, each other, and their students." 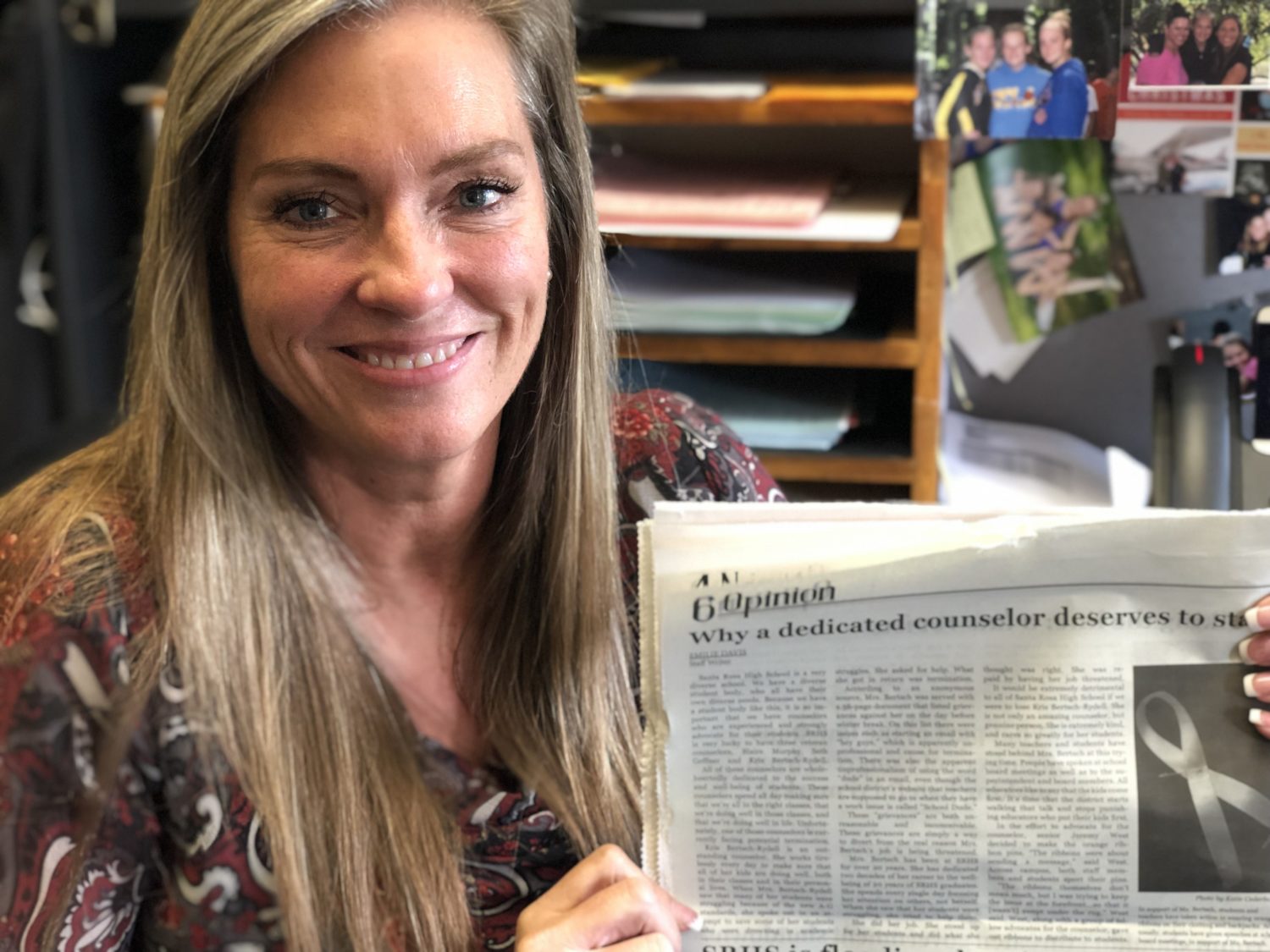 A Santa Rosa High School (SRHS) counselor is being punished for standing up for her students. So say students, parents, and her colleagues in the Santa Rosa Teachers Association (SRTA), who are rallying behind the highly decorated and respected veteran high school counselor, Kris Bertsch-Rydell.

As a veteran counselor, Bertsch has instructional history and knows how the counseling system works. “I’m a strong voice. I’ll advocate for my colleagues as professionals and for our students who don’t have a voice. That’s the reason I became a school counselor,” she says. “There are too many students and families who feel like they don’t have a voice. Someone’s got to speak for them.

“Now my union is speaking for me.”

SRTA filed an unfair labor practice charge that district management discriminated against Bertsch and interfered with her rights protected under California labor law.

Management’s claims involve Bertsch asking questions about school board policies. Cited examples include sending polite, professional emails to the superintendent, school board members and SRTA leaders asking for clarification on board policies on issues such as credit recovery, online schools and new graduation requirements for math. “I asked if we can offer Pre-Algebra to make sure students are prepared. That was ‘unprofessional,’” Bertsch says with a sigh.

“As counselors, we need board policies as guidance for how we do our job. When I ask the question, I’m advocating for myself as a counselor to do my job, as well as for my students and my school. We all have the same concerns.”

I didn’t truly realize this before, that when I spoke up for my students, my union has my back."

Management also charged that she used school email to do union business, which is in fact protected by California labor law. “But it’s not just union business, it’s counseling business,” she notes. “It’s related to how to do my job, so my colleagues can do their jobs.”

“I didn’t truly realize this before, that when I spoke up for my students, my union has my back,” Bertsch adds. “SRTA has stepped up in such an amazing way to help me. It validates that what I did and am doing matters. If I can’t advocate for students when I see a wrong and do something about it, I shouldn’t be sitting here. My students depend upon me to make things right for them. Or at least, to speak up and try to problem-solve in ways that will make things right for them.”

Hundreds of people have sent letters of support and showed up at school board meetings sporting orange ribbons (SRHS school colors are orange and black). Students are showering her with support.

In the school newspaper, The Santa Rosan, staff writer Emilie Davis noted that Bertsch “works tirelessly every day to make sure all of her kids are doing well, both in their classes and in their personal lives. … She did her job. She stood up for her students and did what she thought was right. She was repaid by having her job threatened.”

In the article “Why a dedicated counselor deserves to stay,” Davis noted the absurdity of district management criticizing Bertsch for using the word “dude” in an email. “It’s time the district starts walking the talk and stops punishing educators who put their kids first,” Davis wrote.

The timing of the story in the student newspaper was good, because it was a particularly low point for Bertsch.

“So many times we do what we do and get negative feedback. The students’ support validates what I do every day, and my goal of serving students,” she says, adding that the student support has helped her get out of bed some mornings “because it’s been pretty stressful. I’m a pretty strong person, and I’ve gone through the grinder a few times. This has been beyond detrimental.”

SRTA’s contract calls for progressive discipline, requiring a conversation, notice, and plan for improvement before threatening discipline and termination. In this case, district management skipped the first steps.

Lyon contends this behavior is in retaliation for advocating for students by asking difficult questions. “Kris Bertsch has had fantastic reviews by the eight administrators she worked with during her 25 years in this district. She is an advocate for students, and we’re concerned district managers are trying to intimidate teachers by trying to muzzle Kris. She is being punished for standing up for her students and her profession. And that’s not acceptable.”

“When members are bullied or threatened, it has a chilling effect on their ability to speak up for themselves, each other, and their students,” adds Lyon. “The most effective way to combat this is to stand up for each other.” He is concerned about educators being bullied for supporting Bertsch, noting some of her supporters have received non-re-election notices. “We stand for respectful treatment of all SRTA educators.”

To date, district managers have not taken further disciplinary action. SRTA members and students will continue to advocate for Bertsch, they say, just as passionately as she has advocated for students and colleagues for the past 25 years.