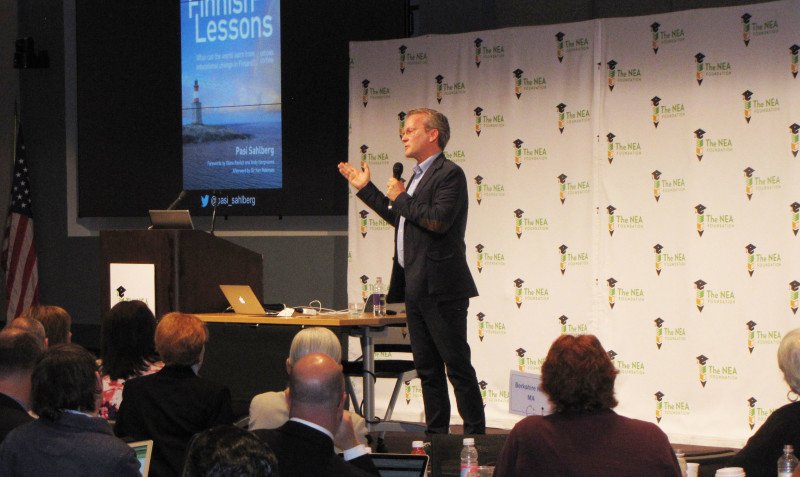 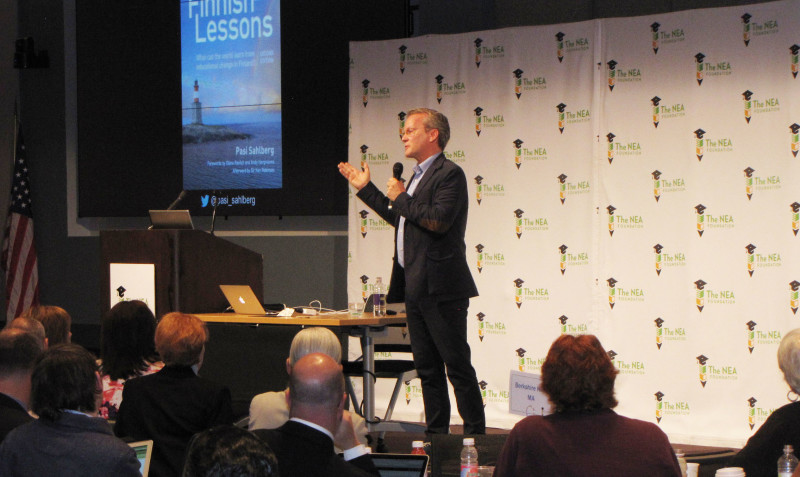 “Equity tries to provide conditions for everyone to learn,” he says. “Some education systems believe competition is key, just like the market system … that the private sector will somehow (manage schools) better. The U.S. needs to work on equity.”

Sahlberg, a policy advisor in Finland who has studied education systems across the world, spoke Thursday at NEA Foundation’s 9th Annual Cross-Site Convening, a two-day gathering of more than 200 education officials and union-district leadership teams from across the nation. The teams are part of the NEA Foundation’s Closing the Achievement Gaps Initiative and its Institute for Innovation in Teaching and Learning. As part of the foundation’s work around teaching and learning, the convening offers union-district teams comprised of NEA local staff and school district officials the opportunity to work with nationally renowned scholars to create locally driven action plans.

“We must collectively take responsibility and action for bold change to ensure the fate of the most vulnerable students does not repeat itself into the 21st century and to guarantee all students have equal opportunity to learn and thrive,” says Harriet Sanford, NEA Foundation president and CEO.

In his presentation titled, “Collaboration, Teacher Voice and Equity in Reforming Education: Lessons from the Finnish Experience," Sahlberg explained how world-leading education systems in countries like Finland, Singapore, and Japan focus on teacher professionalism, collaborative learning, and performance-based tests, whereas the U.S. system is often stifled by standardized testing, low pay for educators, and inadequate funding of schools in some rural, urban and other low-income areas.

“In Helsinki we have positive discrimination,” he says. “Schools in low income areas are given more resources … because maybe there are a lot of immigrants (unfamiliar with the school system) or single parents.” 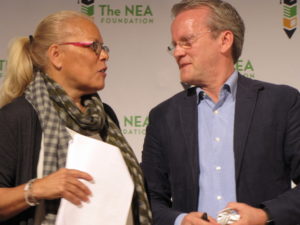 For more than 40 years, Finland has evolved from a highly centralized education system emphasizing testing to a more localized system in which highly trained teachers design local curriculum around flexible national standards. This system is implemented through equitable funding.

“We’ve had a strong focus on equity since the 1970s,” says Sahlberg. “So that everyone has what they need. Fair school funding is part of our framework.”

Meanwhile, the U.S. has been imposing more standardized testing through policies like No Child Left Behind (NCLB) while creating more inequitable conditions between states, counties and school districts, thus expanding the achievement gap and undermining the capacity of some schools to meet NCLB requirements.

Sahlberg notes that Finland has taken a very different path. He observes: “You go to Finland and everyone is using cooperative learning. In the U.S., not so much. The focus here is on standards. Some people here say excellence over equity. But you can have both. (Though), it doesn’t happen by itself.”

In the 1990s, Finland focused on reform curriculum in science, technology, and innovation, leading to an emphasis on teaching students how to think creatively, solve real-world problems, and manage their own learning.

“It is the whole child approach,” Sahlberg says. “Schools have to be designed in a way so kids (have time to think and play) and not have to sit for hours.”

Despite its reputation for over-testing, Sahlberg credits the U.S. with innovations in student learning and teaching employed by countries that often score in the top five on PISA tests, including Finland.

“They use American textbooks, leadership methods, and innovations from the United States,” he says. “Many of their ideas came from America. I do not understand why you do not do these things here, that happen everywhere else.”

This year’s convening is titled, "At the Intersection of Heart, Mind, and Community – the Profession of Teaching in the 21st Century."

“After nearly three decades of educational restructure and reform have swept across the nation, the universal quest to ensure that all children enter the 21st century ready to learn and thrive remains an elusive goal,” says Sanford. “Our theme seeks to bring into sharp focus the “what,” “why,” and “how” of the evolving profession of teaching."