While federal officials mull over their options, educators are on the front lines of efforts to curb students’ e-cigarette use. 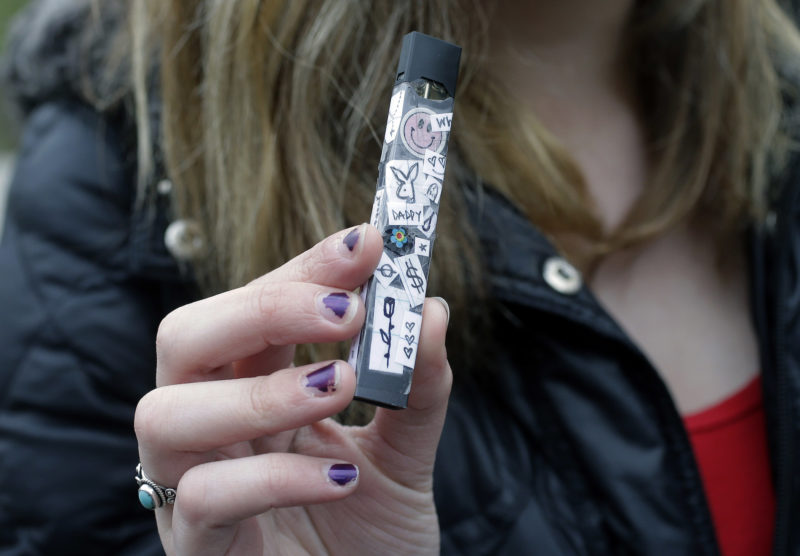 That scent of cool mint or mango that sometimes wafts from the student bathroom or the back of the school bus? It’s the olfactory evidence of growing, widespread use of e-cigarettes by middle and high school students.

“The bathrooms shouldn’t smell like blueberry flavoring,” notes Oklahoma teacher Christine Pankrantz in a recent NEA Today Facebook post. “Our students use them in their cars…in the bathrooms…we’ve had scientists and doctors come talk about the dangers of vaping, but it seems that we’re fighting a losing battle. They’re so easy to get.”

Federal officials call it an “epidemic of youth use,” and estimate that the number of high school students who use e-cigarettes, sometimes called vapes for their telltale plumes of scented vapor, has risen about 75 percent in the past year to about 3 million students, overtaking tobacco products in popularity. One of the most popular is JUUL (pronounced jewel). Equipped with kid-friendly flavors like “fruit medley,” and packaged to look like a sleek computer flash drive that can be tucked into a fist or pocket and charged in a USB port, each JUUL cartridge contains roughly the same amount of nicotine as 20 cigarettes.

Nicotine is highly addictive, and the “developing adolescent brain is particularly vulnerable to addiction,” notes the federal Food and Drug Administration (FDA), which recently announced it would ban the sale of flavored e-cigarettes in convenience stores and gas stations.

Our students use them in their cars…in the bathrooms…we’ve had scientists and doctors come talk about the dangers of vaping, but it seems that we’re fighting a losing battle. They’re so easy to get.” - Christine Pankrantz, teacher

But while federal officials consider their options, educators remain on the front lines of efforts to curb students’ e-cigarette use. “It’s happening in the hallways, it’s happening in the bathrooms, we even had a kid a couple of years ago vaping in the classroom!” says Cam Traut, a school nurse at Libertyville High School in the Chicago suburbs and a National Association of School Nurses board member.

For the most part, students don’t seem to realize it’s a dangerous habit. “I get the sense that students think it’s safe,” says Traut. “The marketing or advertising was, ‘oh, this is a much healthier version of traditional, tobacco cigarettes,’ so the kids have focused on that ‘healthier’ component. And it’s taken off like wildfire.

“As a school, we’re trying to provide some education to the kids so that they understand the health risks they’re taking, and we’re also educating our staff on what to look for… It’s an uphill battle,” says Traut.

Like regular tobacco-filled cigarettes, e-cigarettes work to deliver a jolt of nicotine to the brain. But unlike regular cigarettes, they’re battery powered devices. Typically, the battery is activated by the user’s puffing, which, in turn, heats and vaporizes liquid chemicals in the cartridge. The user inhales the resulting vapor, which often is flavored.

Those flavors are attractive to kids, warns the American Academy of Pediatrics. And, despite industry claims that the e-cigarettes are intended to help adult smokers move to a tar-free product, health advocates say the devices are creating a new generation of nicotine addicts. In fact, 15- to-17-year-olds are more than 16 times more likely to be JUUL users than 25- to 34-year-olds, according to the Truth Initiative, a non-profit public health organization that was established 20 years ago as part of a settlement between tobacco companies and states.

“The teens are after innovation and they’re attracted by sleek design and ease of use,” according to Dr. Sarper Taskiran, a child and adolescent psychiatrist at the Child Mind Institute, which recently produced a "need to know" guide for parents. “They look like an Apple product.”

Taskiran notes that prevention is a lot easier than treatment. Parents and educators need to educate themselves first, and then their children and students. He notes "peer educators can play an important role."

It's easy to get addicted to nicotine, Michigan school bus driver Marti Alvarez warns students. She knows firsthand that it's much more difficult to stop. "It is so much easier to just not start a habit," she tells them.

And adolescents are particularly vulnerable to addiction, scientists have found. In a conversation with NEA Today in 2015, the author of The Teenage Brain, Dr. Frances Jensen, explained how young people have a higher degree of “synaptic plasticity” than adults, which means they are building bigger and faster connections in their brain. “They can imprint—on good things and bad things. For instance, addiction, which is a form of learning, is stronger, faster, and longer in younger people.”

Jensen advises educators to talk to young people about their brains, how they work, and how the science reveals their particular risk of addiction.

“Evidence-based information” also is the preferred strategy in Libertyville, says Traut. While her district has policies that can lead to school suspension over e-cigs—as well as tobacco products—their school-based administrators don’t aim to suspend students over vaping, she says. Students are more likely to be counseled and educated about the risks.

The best way to approach students is with “mutual respect,” says Alvarez. Often, “the harder authority pushes and yells [about some forbidden thing], the more the kid is attracted to it and the more they rebel.”