Despite the strong economy, Virginia ranks 42nd in per-pupil state funding. Educators say it is time for public schools to share in the prosperity. 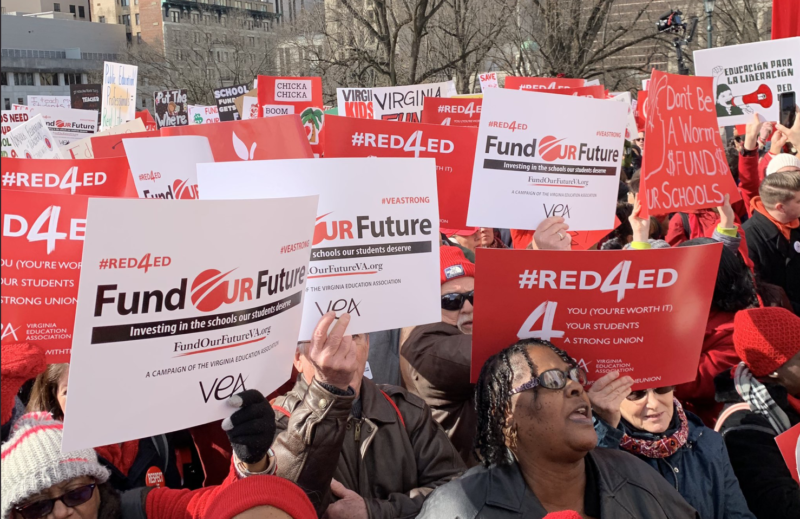 Roughly 4,000 Virginians, led by educators, rallied in front of the state capitol in Richmond on Monday to call out legislators for allowing education funding to suffer even as the state prospers.

English teacher Amy Brown said she was at the rally because her students deserve better than a classroom with moldy ceiling tiles and a wall full of roaches.

“We have cubicle partitions that we can’t hang bulletin board paper on because there’s nothing to staple it to—so we just keep taping in roaches,” said Brown, who works at Henderson Middle School in Richmond.

State support for schools has not been restored even to 2009 levels; in fact, education funding was cut 9 percent since the recession ended. That has resulting in ballooning class sizes, a lack of resources from textbooks to computers, and deepening inequity between schools in Virginia’s richer and poorer communities.

The rally is the latest Red for Ed action in a series of events ranging from the teacher walkouts in West Virginia, Arizona, and Oklahoma, to the recently concluded L.A. teachers strike.

The Virginia Education Association (VEA)—the state’s largest educator union—and the grassroots organization Virginia Educators United coordinated to gather their members and other public school advocates today to deliver the message that the Commonwealth puts far too little of its magnificent wealth into public education.

Virginia Educators United gathered first at Monroe Park, where they were joined by NEA President Lily Eskelsen Garcia and AFT President Randi Weingarten. The group then marched roughly a mile to meet VEA members in front of the capitol steps.

Virginia elementary music teacher and NEA Secretary-Treasurer Princess Moss riled the crowd by pointing out that Virginia is the 12th richest state in the nation and ranked by Forbes magazine as #1 for business.

In other words, the state economy is strong. Yet the state ranks 42nd in per-pupil state funding and 34th in teacher pay.

It was great to be with a few thousand close friends as we were #RedForEd! Our students, their families, our schools are depending on us to lead a future that respects the whole child, the whole community and respects the men and women who know the names of the students @VEA4Kids pic.twitter.com/6dHpI9szvi

“We’re going to hold legislators accountable,” Moss said, then led the crowd in a chant: “I know, you know, Virginia can do better!”

Shortly after the rally, the House of Delegates announced their intent to draft a budget that includes a pay increase of 5 percent for teachers, matching the request made by Gov. Northam.

Virginia Education Association President Jim Livingston called it both a “step in the right direction” and a “down payment.”

“Virginia Education Association members from across the state rallied at the Capitol today to protest the state’s retreat from its funding responsibilities,” Livingston said. “Our members are energized, they are dedicated—and they are sick and tired of being told they’ll get the support their students need…some time later.”

That’s a change educators here would like to see.

“Policy makers need to hear from us, said Eunice Turkson, a teacher at Fairfield Court Elementary in Richmond. “They sit in their offices and look at students as charts and graphs, but we are in the classroom and we see the reality. They should listen more to teachers and give us what we need.”