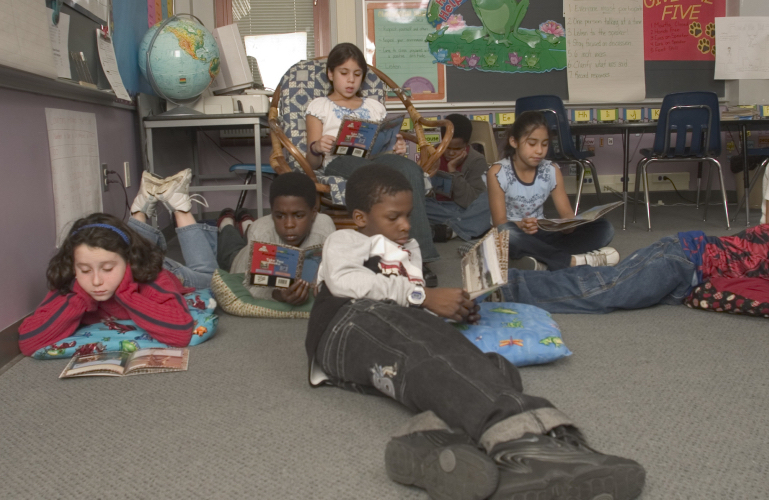 The shortest month of the year has come and gone, as has the celebration of Black History Month when we mark the many contributions African Americans have made to our history, culture, and society. But we're almost two decades into the 21st Century and it's long past time to incorporate and highlight the achievements of African Americans into year-round curriculum. Black history is American history.

NEA Today sat down to talk about Black History Month with Deborah Menkart, executive director, and Allyson Criner Brown, associate director, of Teaching For Change, a social justice education organization that encourages teachers and students to question and re-think the world inside and outside their classrooms, build a more equitable and multicultural society, and become active global citizens.

Why do you feel it is important to show students that Black history should not only be taught, celebrated, and acknowledged in February but year-round?

ACB: Concentrating black history into a month perpetuates traditional narratives of whiteness as the norm in the United States, with the contributions of people of color on the side. Focusing on black history only in February also inherently limits what students will learn since black history spans more than 400 years, from the colonies to today.

Do you think that students are more receptive and engaged in lessons that involve their own ancestry as well as relevant issues that many face today such as excessive use of force by police and deportation?

DM: Students are more engaged and successful when the lessons connect with -- and help them explore -- their own lived experiences, including race, ethnicity, class, gender, and geographic area. This is supported by a Stanford University study released in 2015 that shows the benefits of ethnic studies in middle and high school. Also, by examining the social and political issues that affect them, students can learn about the historical context and consider collective solutions.

What can educators do to show students that black history is actually American History and shouldn't be separated but combined?

ACB: Educators can start by teaching black history all year long as U.S. history. We have to interweave timelines, events, people, and perspectives – and not just those of black Americans. If you are teaching an accurate narrative of U.S. history, then African American, Native American, Latino, Asian American, and European American history should be front and center throughout.

How has the 'Black Lives Matter' movement impacted students?

Do you believe this movement is political?

ACB: Yes, everything in education is political. To not teach accurate history, to leave out Black history and other people of color, to use a ‘neutral’ approach to teaching history, are also political acts. At Teaching for Change, we believe that education should provide opportunities to collectively envision just and fair schools, communities, and the larger society; and that education should inspire and empower us to do the necessary work to make those visions come true. As Lerone Bennett Jr. said, “An educator in a system of oppression is either a revolutionary or an oppressor.”

How can we challenge traditional history lessons and show students the significant impact people of color have always had on the shaping of our nation?

DM: Students will learn that the traditional narrative of U.S. history, which places people of color in the margins or refers to diversity as a new phenomenon, is wrong. An honest examination of U.S. history demonstrates the central role that Native Americans, African Americans, Latinos, and Asians have played since throughout U.S. history. This is true for the labor and ingenuity that has built this country, in addition to our democratic traditions. For example, public schooling for white and black students in the South resulted from legislation by African American elected leaders during the Reconstruction era. (Tragically, when Reconstruction was violently ended by white supremacists, African Americans were then denied equal access to public schooling. White students of all economic classes continued to benefit from the policies that African Americans had fought for.)

There are countless examples of the role of people of color being erased from history. For example, the traditional narrative often credits President Abraham Lincoln for "freeing the slaves." Missing is the central role of the enslaved in securing their own freedom. Also missing is the role that African American labor, skills, and knowledge played in building the entire economy of the United States during slavery and beyond. This stolen labor has yet to be compensated and has a direct impact on racial inequities today. If students learned the full scope of this theft, there would be greater understanding of the demand for reparations today. The invisibility continues today.

Why do you think teachers focus so heavily on the household names of leaders from Civil Rights movements and slavery when there are many more luminaries that students should know about other than renowned figures such as Martin Luther King, Jr., Rosa Parks, and Harriet Tubman?

ACB: Test-driven instruction, textbooks, and tradition are among the factors explaining why teachers focus so heavily on the household names of leaders from the Civil Rights movement and slavery. Teachers often also have a lack of knowledge themselves about black history and are repeating many of the names they learned about in textbooks. It’s also worth noting that this country has a tradition of creating and elevating heroes. Now, many of the people we celebrate – Harriet Tubman, Rosa Parks, Dr. Martin Luther King, Jr. to name the key figures – should be lauded for their life’s work. However, hero celebration – in black history – takes away from our understanding and appreciation of the role everyday people played in creating change in this country. How will students see their role in our democracy if we teach them that the occasional ‘heroes’ we learn about in U.S. history are the only people who affect change in this country?

Where is a good place to start for educators who wish to broaden their curriculum?

DM: This year we are focusing on two periods of history. We encourage teachers to check out our Zinn Education Project (with Rethinking Schools­) campaign to Teach Reconstruction and our online resources for our publication, Putting the Movement Back into Civil Rights Teaching.