There are solutions to end cafeteria shaming and make sure all students receive the nutrition they need while they are at school. 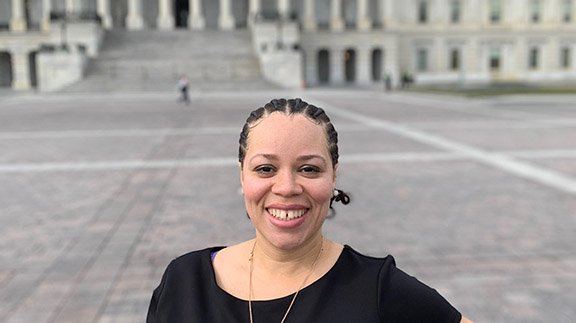 Marcie Villanueva had an unsettling experience when she first started working in food service in Delaware’s Brandywine School District five years ago. She started her training in a middle school, where she witnessed a cashier take a child’s lunch, throw it away, and replace it with a cheese sandwich, an apple, and milk.

“I saw that look of distress come over that child’s face, and the cashier’s face said she was uneasy as well,” says Villanueva. But the employee had to follow the district policy: If a child’s meal account balance was $10 or more in debt, the meal had to be thrown out and replaced, even though the price of the regular lunch was still added to the child’s debt.

“The fact is that there is no discreet way to do that to avoid shaming the child,” Villanueva says.

Similar scenarios, in which children are publicly identified and embarrassed in the cafeteria, have played out across the country as schools have struggled to deal with rising meal debt. Many have made national news—like the story of a nine-year-old Ohio boy, whose lunch was taken on his birthday in front of all of his friends. His grandmother, who was in the process of enrolling the child for reduced-price meals after taking in the boy and his siblings, owed the school $9.

There are solutions to end cafeteria shaming and make sure all students receive the nutrition they need while they are at school. That’s what Villanueva traveled to Washington, D.C., to convey to lawmakers at a briefing of the House Education and Labor Committee on Monday.

School meal debt on the rise

Three out of four schools in the U.S. have meal debt, and district policies to handle that debt vary widely, according to the Food Research & Action Center (FRAC) one of the organizers of the briefing.

In some districts, meal debt has soared to the hundreds of thousands of dollars. After Denver Schools changed its policies to eliminate cafeteria shaming, meal debt exploded, rising from $13,000 in the 2016-2017 school year to $356,000 the following year.

To cover the debt, districts are then forced to dip into general funds used for everything from paying teachers to keeping the lights on.

There are many reasons that families accrue school meal debt. Some don’t realize that their children qualify for free meals. Often a life change—a lost job or a divorce, for example—could mean that a student would receive free school meals if a parent or guardian applied for them.

Other families don’t quite qualify for free meals, but cannot pay their share of reduced-price meals. In some districts, parents are charged a fee every time they add money to student accounts, which further penalizes parents who can only pay in small installments over time.

Villanueva, who grew up attending school in the same district she works in today, understands the struggle to afford school meals.

“My family went through a rough patch and for a time we qualified for reduced-price lunch,” she says. It was still a difficulty.

“That’s why I feel so much for these kids when I see stuff like this.”

We can do better

Villanueva could feel the nerves setting in as she walked down the marble hall of the Rayburn House Office Building for the briefing. But she was determined to get her key message across: We can do better. There are ways to eliminate cafeteria shaming, prevent students from going hungry, and keep school cafeterias from operating in the red.

When she was asked what her school and district are doing to address the issue, she spoke with confidence: “I’m very happy to say that in my school all children eat for free.”

Harlan Elementary, where Villanueva has had a managerial role for the past two years, has implemented free meals for all students under the Community Eligibility Provision (CEP) of the Healthy Hunger-Free Kids Act of 2010. That eliminates any possibility of cafeteria shaming and allows food service professionals to focus on meals and a positive environment instead of debt collection.

Any school can implement CEP if 40 percent of their students are “directly certified” for free school meals, meaning their families participate in particular federal programs such as the Supplemental Nutrition Assistance Program (SNAP), or if the child is in the foster care system.

In fact, if 40 percent of students in a school district are directly certified, the entire district can implement CEP.

Of the 17 schools in Villanueva’s district, 11 are CEP and six currently are not. But revised policies have helped students in the non-CEP schools as well.

“Our district did away with the cheese sandwiches and give every student a meal. Now any communications about meal debt are only between the adults,” said Villanueva. “We also have an angel fund that accepts donations from organizations and individuals to help pay off children’s accounts.”

What role can Congress play?

Expanding the number of schools that participate in CEP is just one of the ways that Congress can help. According to FRAC, more than 28,500 high-needs schools have implemented CEP, but that’s only 65 percent of the schools that are eligible.

But the Trump Administration has instead proposed to walk back the program, making CEP available only to individual schools that qualify on their own. Also, the Administration’s proposed changes to the SNAP program would cut as many as 1.3 million students from the program, meaning they would no longer be directly certified for free school meals and again lowering the number of schools that qualify for CEP.

A number of federal proposals have been introduced that would prohibit schools from taking any action that stigmatizes or shames students who cannot pay meal fees, require all communications regarding meal accounts to occur only with the parent or guardian, and help families enroll in programs for which they qualify.

But so far Congress has not acted.

For now, states are taking the lead in passing policies that will end cafeteria shaming, provide students with the nutrition they need, and help schools sustain their operations. New Mexico, California, and Virginia are among the states leading the way.

In the meantime, many school districts and communities are doing their best to ensure that no child is humiliated in the cafeteria.

“In a perfect world, school lunch should be free,” says Villanueva. “I know there’s an expense, but let’s make sure while a kid is at school, they are completely taken care of and no one has to know whether this family can afford meals and this one can’t.”