Two paraprofessionals, both deeply concerned for their students, share why they are all in for Joe Biden. 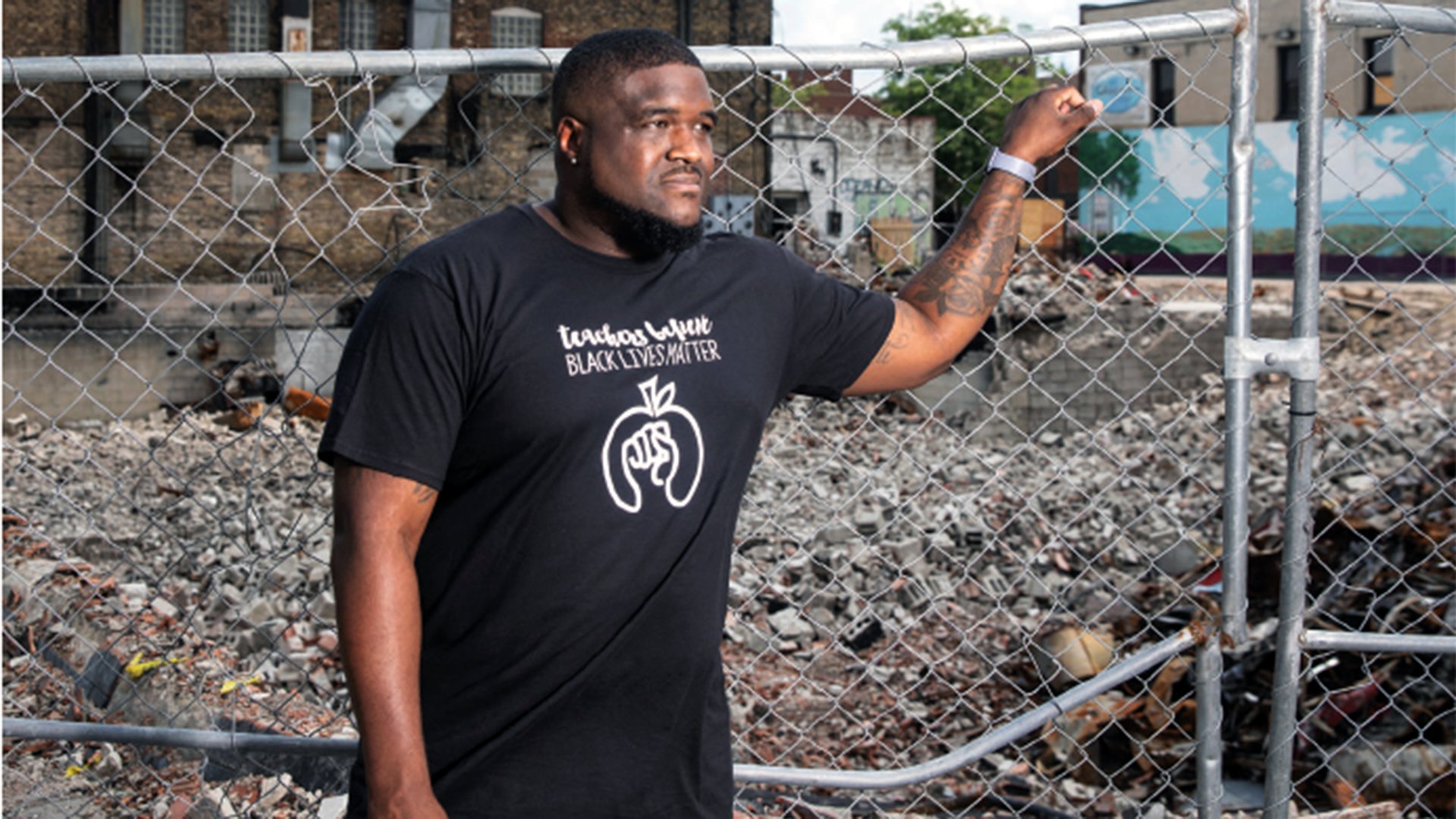 Ackerman + Gruber
Jabari Browne in a Minneapolis neighborhood near his school that was damaged during protests against police brutality.
By: Amanda Litvinov, NEA staff writer
Share

By last May, Jabari Browne was beyond worried about his students, “because of all the tragedy going on around them,” he explained.

Sanford Middle School in Minneapolis, Minn., where Browne served as a special education paraprofessional, is just three blocks from the Minneapolis Police Department 3rd Precinct—ground zero for the protests that followed the killing of George Floyd by a police officer. Hundreds of businesses in the neighborhoods where his students live had been closed, looted, and burned. A few students who marched in protests were teargassed.

Like most schools across the nation, Browne’s school building was closed in the spring due to the COVID-19 pandemic, but he and his colleagues continued to support students through distance learning. None of it was how he imagined closing out his fifth and final year at Sanford. Browne is earning his master’s degree, and he moved on to a co-teaching position at another local public school for the 2020 – 2021 school year.

Browne was concerned about his students’ safety, about whether their educational needs would be met, and about the state of the country they would inherit.

“Since Donald Trump has been in office, he’s made it a lot more comfortable for people to express hate and [for] racist people to commit heinous crimes,” Browne says. “I want a president who will make change, and advocate for all Americans.”

Browne is supporting Joe Biden for president in large part because Biden is serious about investing in all students.

“Joe Biden talks about doubling the number of psychologists, guidance counselors, and other mental health professionals in schools—and that’s what our students need,” Browne says.

He says one of Biden’s most important proposals is to fully fund the Individuals with Disabilities Education Act, which helps schools educate special needs students like his: “That would mean everything to me.”

Biden will give educators a voice

Paula McConnell, a special education paraprofessional from Utica, Mich., also believes that Biden will do important things for public education.

“The first change I’d like to see is a new secretary of education,” McConnell says, “and it should be someone with solid experience in public schools.”

“Betsy DeVos is from Michigan. We’ve seen what she’s about—taking money out of the public school system and putting it into the private schools,” she says. “That hurts the most vulnerable students we have.”

McConnell sees Biden as more in touch with public schools, in part because his wife, Jill Biden, is a longtime educator and NEA member. “She knows what’s really needed in public schools.”

McConnell, who served as vice president of the Utica Paraprofessional Association for seven years, believes it’s important for educators to have a voice in education decisions.

She also believes Biden will do a better job than Trump in helping public schools through the pandemic with resources and guidance.

For the past 25 years, McConnell has worked with students who have special needs ranging from autism to cognitive delays to emotional disorders. She says the most rewarding part of her work is witnessing tremendous growth in special needs children, who benefit from the structure of school and the services they receive there. Seeing former students do well and even go to college, “that’s what keeps you going,” McConnell says.

She is already involved in local school board elections and advocating for Biden through the Michigan Education Association.

And, back in Minneapolis, Jabari Browne is getting involved through NEA’s digital election resource, OutreachCircle.

“I don’t always voice my opinions about presidential races, but a lot of people already know that I’m voting for Joe Biden because we desperately need change,” Browne says. “These last four years have just been too sad.”