West Virginia Educators Take Their Power to the Polls

"We have a voting bloc that, if we turn out to the polls, can outvote anybody." 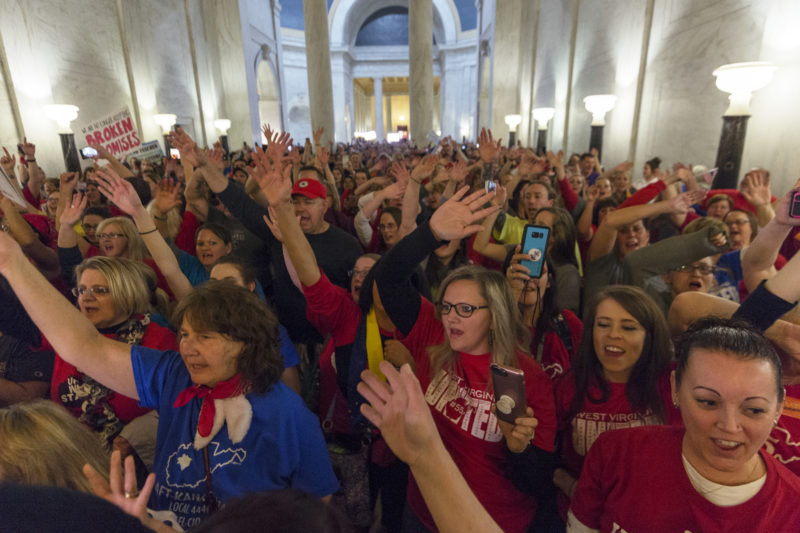 It was an electric surge of their own power.

“It was a great feeling watching the returns come in!” said Jonas Knotts, a high school teacher and president of the Webster County Education Association, an affiliate of the West Virginia Education Association (WVEA). “People and educators are really starting to see the power that they possess. We have a voting bloc that, if we turn out to the polls, can outvote anybody. Teachers are realizing this. It’s something that fills us with a very empowering feeling.”

Early this spring, WVEA members kicked off what NEA President Lily Eskelsen García has called an “education spring” with a statewide, nine-day strike that brought red-shirted educators from every one of the state’s 55 counties to the state Capitol.

Their massive show of solidarity, which ended with significant pay raises for all public workers, including teachers and education support professionals, and the establishment of a state task force to address public-worker health insurance, inspired educators across the nation. It has been followed by statewide educator walkouts in Oklahoma, Arizona, and Kentucky, and huge Capitol demonstrations in Colorado and North Carolina.

Now, WVEA members are modeling what happens next: They’re taking their energy and passion for public education to the ballot box. In this May’s primary races, WVEA endorsed 115 pro-public school candidates for U.S. Senate, U.S. House, and the state’s House of Delegates and Senate. Of those, 99 candidates—or nearly 90 percent—won. One state lawmaker who had called union members "free riders" was shown the door.

This is exactly what public-school educators across the nation have promised to do in the mid-term elections this November. With this latest show of union strength, WVEA members have shown how it can be done—and how good it feels.

“This election was a huge vindication for the power of the movement because, of course, the opposition was saying ‘they’re going to forget, they’re going to stay home,’” said Knotts. “But we know it’s only one victory in a long war. We have to keep up those conversations, we have to keep people engaged, we have to show them how we’re working to improve everybody’s status—from teachers to support personnel to students to communities.”

Taking Power to the Polls

The West Virginia educators’ strike was the result of decades of neglect by state lawmakers. With school budgets cut to the bone and great teachers leaving the state in droves, dedicated educators just couldn’t take it anymore. “People were starting to ask themselves, what is my future here? What is the future for my students, my children? And they realized that unless action was taken, there isn’t going to be a future,” said Knotts.

Educators walked out because they couldn’t remain silent, and they stayed out with the support of their students, families and community members until state lawmakers finally agreed to do something about the problem.

It was a bold lesson in the power of solidarity and civic engagement—and nobody learned it better than the striking teachers.

“The strike really opened up people’s eyes,” said Knotts. “In years past, people and educators felt like there wasn’t anything their vote could do. They felt like whatever happened in Charleston wasn’t connected to their lives. They couldn’t see the end game, how elections truly matter, and how they directly affect their work environment and their students.”

In the weeks leading up to the May primaries, WVEA members made their preferences known. “Word of mouth was the biggest thing,” said Heather White, president of the WVEA-affiliated Grant County Education Association. “We made sure to utilize Facebook. All of us who are on it have friends who are not educators, and they’d follow the articles we’d post and send.” Educators also helped register new voters, drove elderly people to the polls, and stood on street corners with posters for their preferred candidates.

WVEA members—and their friends and family members—remembered which legislators stood with them during the strike and supported the health-insurance task force, and which ones talked about the need to keep great teachers in West Virginia.

They also remembered who didn’t.

“Going to the Capitol, sitting in committee meetings, listening to the debates and following [the legislators] on social media—it makes you think, ‘oh my, this is the person representing our interests?’” said Knotts.

That person—the one representing the interests and welfare of public-school educators and students—is not Robert Karnes.

Karnes, the incumbent senator in West Virginia’s 11th District, is known in the state as “maybe THE biggest teacher-hater, public-employee hater out there,” said Knotts. “This is a person who goes out of his way to antagonize and harass and destroy public education. He has no qualms about saying that because he homeschools his eight kids he should not have to pay taxes to support public schools.”

He got elected, suggested Knotts, because too many educators stayed home during the 2014 election.

In his challenger, state Delegate Bill Hamilton, a nine-term moderate Republican who supports public education and has opposed anti-union legislation, educators across the enormous, six-county 11th District found somebody that they could support with enthusiasm. Dozens went so far as to switch their party registration from Democrat to no-party affiliation so they could cast a ballot for Hamilton, said White.

“The thing about Karnes is that he just didn’t support public education,” said White. “Our local schools have the bare minimum of what they need. There’s just no way we could survive with any less, and still do what we need to do for our kids.”

Last Tuesday, on Election Day, WVEA members said no to less. They flexed their muscles. When the returns were counted, Karnes had been trounced, barely taking a third of the votes cast. “It had been our goal for four years to take him down. We succeeded. Not just mildly. He was destroyed in every county in his district,” said Knotts.

On Wednesday, the day after the election, in a show of celebration and solidarity, many WVEA members wore their red “55 Strong” t-shirts that they had worn to the Capitol a few months earlier. “It was like everybody knew the power!” said White.