What's the Purpose of Education? Public Doesn't Agree on the Answer

Academic achievement vs. career prep vs. citizenship. A new survey reveals that public consensus is elusive, but local schools continue to get top grades.

Is the primary role of public education to provide rigorous academic instruction? Or is to promote good citizenship? How about creating a skilled, career-ready workforce? According to the 2016 PDK poll of the Public's Attitudes Toward the Public Schools, there is no clear consensus on the purpose of education. Fewer than half (45%) of the respondents say that academic achievement is the main goal and only one-third of that segment believe that "strongly." Citizenship and preparing students for work were both cited by roughly 25%.

When asked to choose, 68% to 21% said they would prefer schools to focus more on career/technical skills-based classes than to offer more honors or advanced academic classes.

“The American public does not agree on a single purpose for public education,” said  Joshua P. Starr, the chief executive officer of PDK International. “And that’s despite the emphasis on academic achievement of the past 16 years. This tells me that the standards and test-based reforms of the Bush and Obama administrations have addressed only part of what the public wants.”

"With the right curriculum and pedagogy," says Starr, "these purposes don't have to be mutually exclusive."  Still, the public is clearly looking for a stronger connection between the classroom and the the world of work - a sure sign that economic anxiety and uncertainty lingers almost a decade after the Great Recession began in 2007. 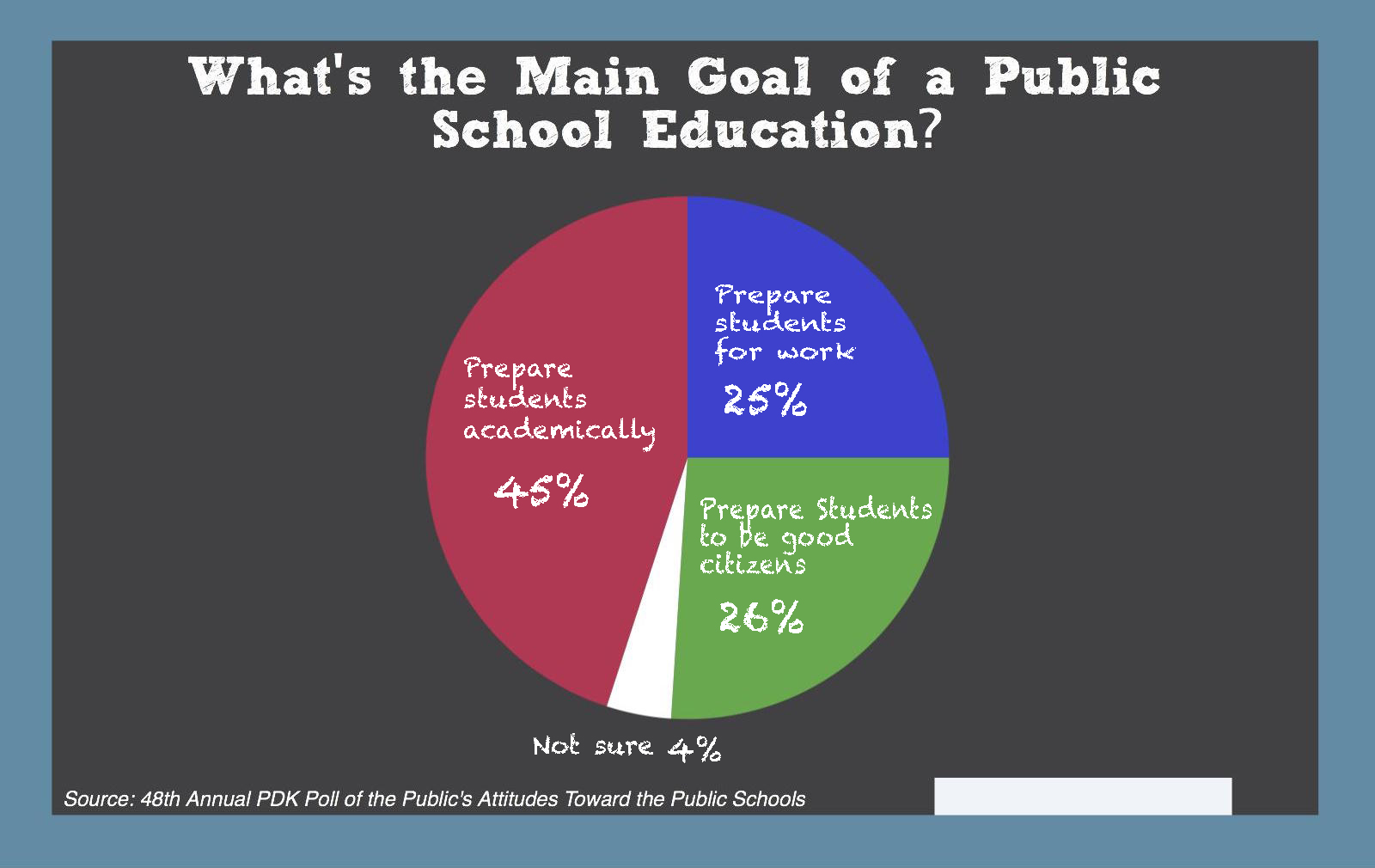 According to the survey, the public continues to give their local schools high marks. Sixty percent of parents with at least one child in public school grade their school an A or a B. As the PDK poll has found in the past, however, a gap exists between how people view their local school and how they view schools nationally. Only 24% of the public gives positive grades to the nation's schools - an increase of 7 points since 2014.

How a parent feels about a school's ability to keep them informed appears to be a major factor in their evaluation. According to the survey, parents who are very satisfied with the school's communication are three times as likely as those who are less satisfied to give their child's schools an A.

"Satisfaction and involvement go hand in hand,” the PDK survey concludes. “Parents who rate their schools positively on keeping them informed, inviting them to visit, offering them opportunities to provide input and showing interest in their input are more apt to feel involved with their child’s school overall.”

For the 15th consecutive year, a plurality of Americans (19%) believe lack of funding is the top problem facing public schools, and, by 53% to 45%, a majority favors raising local property taxes to help improve public schools. Furthermore, if taxes were raised, 34% of respondents said they would want the revenue to be allocated toward hiring new teachers and raising their salaries. Seventeen percent cited more supplies and technology, and an equal number would spend the money on classes and extracurriculars. Infrastructure improvements and new schools were identified as the top spending priority by 8 percent. 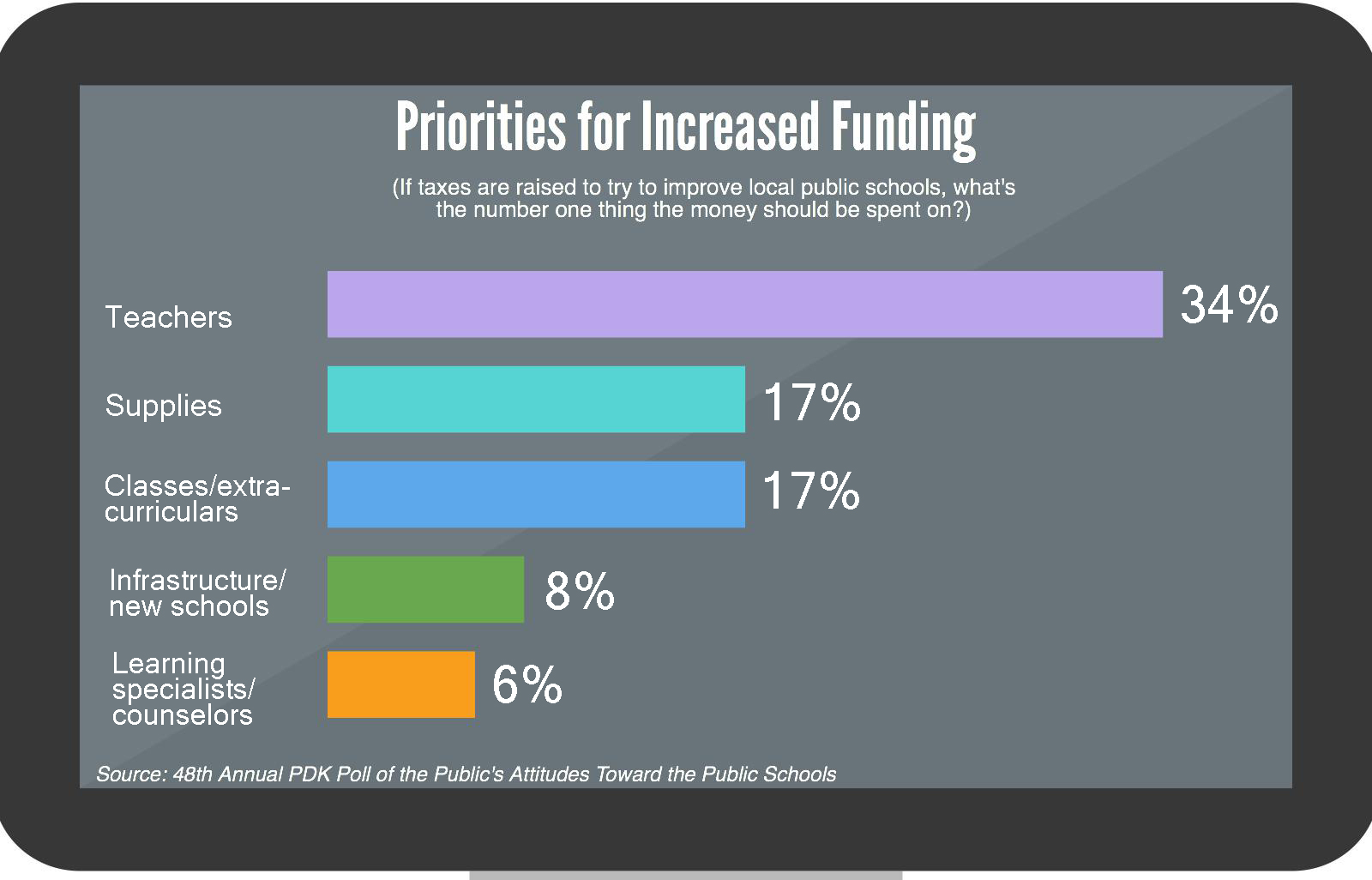