“It’s like breaking a habit, but the first thing you have to do is become aware of the habit,” says expert. 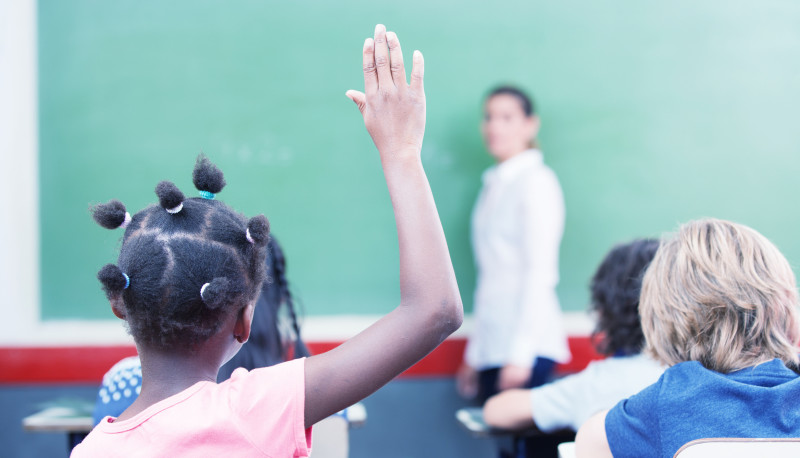 Whether or not a teacher “believes in” her students and expects them to succeed has been shown to affect how well that student does in school, particularly among disadvantaged students. But educators should be aware that those expectations can be influenced by their own implicit racial biases.

In a recent study that looked at interviews involving 16,000 U.S. teachers, Black and non-Black teachers were asked to predict their 10th-graders’ future educational attainment. Would she graduate from high school? How about college? When asked about any specific Black student, White teachers were about 30 percent less likely than Black teachers to predict he or she would someday earn a college degree. For White students, the teachers’ predictions, or expectations, were about the same.

“We cannot determine whether the black teachers are too optimistic, the non-black teachers are too pessimistic, or some combination of the two,” wrote one of the study’s authors, American University’s Seth Gershenson, in an an August blog post. But, he noted, it is worrisome nonetheless, “as systematic biases in teachers’ expectations for student success might contribute to persistent socio-demographic gaps in educational achievement and attainment.”

The study also found that the racial mismatch of expectations was stronger for boys, and that the most optimistic group about Black male students was Black female teachers (even more so than Black male teachers.)

“These results are not meant to, nor should they, demonize or implicate teachers,” wrote Gershenson. “Biases in expectations are generally unintentional and are an artifact of how humans categorize complex information.” Hopefully, the authors suggest, the study’s findings will lead to helpful discussions.

What is Implicit Bias and Can it Be Fixed?

Implicit biases are defined by the Kirwin Institute as attitudes or stereotypes that are activated unconsciously and involuntarily. They are not the same as biases that a person might try to hide because they’re unpopular or socially incorrect. Social scientists believe that implicit biases are learned as young as age 3, and may be fueled by stereotypes perpetrated in the media, or beliefs passed along by parents, peers, and other community members.

“Our belief here is that we all have implicit biases,” said Maureen Costello, director of Teaching Tolerance, a project of the Southern Poverty Law Center working toward equity in schools. And it’s not just teachers, she points out. Recent studies, prompted by police shootings in Ferguson and elsewhere, have looked at implicit biases among law enforcement officers and found that both White and Black officers often have implicit biases about Black community members.

The consequences for Black communities policed by biased officers has been tragic, but it can be equally consequential in schools, points out Becki Cohn-Vargas, the co-author of Identity Safe Classrooms: Places to Belong and Learn. “This is not about blaming or pointing fingers,” she said, but it clear that the decisions made by teachers also do affect children’s life trajectories. Unequal discipline, for example, may fuel the school-to-prison pipeline that has disproportionately affected students of color.

But what’s important to know about implicit biases is that, once people are made aware of them, those biases can be successfully addressed. “We can mitigate them. We can interrupt them. You can train your mind to catch yourself,” said Costello. “It’s like breaking a habit, but the first thing you have to do is become aware of the habit.”

Awareness is the first, foundational step. (To take an Implicit Assessment Test (IAT) online, visit Teaching Tolerance’s Test Yourself webpage.) The second step, suggests Costello, is developing a sense of reflectiveness. Ask yourself, “Is the way I’m approaching this student affecting outcomes?” And consider the data available in your classroom: Who do you call on, and how often? (Do you need to switch to a randomized technique, like pulling popsicle sticks?) How do you seat students, or group them? Are you treating everybody the same when it comes to homework, or are you giving a break to the kid you think has a bad home life or little chance of getting to college?

Researchers also suggest it’s helpful to “refute” and “counter” the negative stereotypes that fuel biases, said Cohn-Vargas. That means recognizing these stereotypes really aren’t true, and opposing them with ideas that are: for example, it’s not true that all Black boys are loud and disruptive; it is true that students who talk a lot often are enthusiastic.

Cohn-Vargas suggests it’s also important for educators to recognize their students as people who are individuals.

Much of this kind of work is done by culturally competent NEA members, trained by NEA trainers, through NEA’s National Diversity Training Program. Additional resources to help NEA members work with students who may not look like them are available online, including NEA’s Diversity Toolkit and Teaching Tolerance’s “Culture in the Classroom” project.

“I’m actually encouraged by some of the things happening in positive psychology,” said Costello. “If you end every day by journaling or writing down three things that were great in your class, and give yourself a little time for mindfulness and meditation, you can help retrain your mind to see the positive rather than the negative."