Student dress codes continue to unfairly target girls and students of color. Experts and educators weigh in on how to make them more equitable.

While a dress code is supposed to make the school environment more conducive to learning, it frequently does the opposite. In the past year, schools all over the country made national news for the ways they enforce their dress code—asking a student to put duct tape over the holes in her jeans, suspending a student for a skirt that was too short, or sending a student to the office for not wearing a bra—all of which take the focus off learning and place it on girls’ bodies.

With more members like you, we’ll have a stronger collective voice in the policies that shape the wellbeing of our students, our schools, and ourselves.
Learn more about membership

At East Longmeadow High School, Massachusetts, six out of the nine dress code regulations targeted female students. The dress code had not been updated since the 1990s. “It was time for us to revisit some of the language,” principal Gina Flanagan said.

Many school dress codes use gendered language, such as “girls must not wear spaghetti straps or show cleavage.” The reasoning? These things are distracting to other students, particularly males. Girlhood expert Shauna Pomerantz of Brock University says that “dress coding” students for being distracting is a form of victim-blaming.

“It’s saying the male response is your fault. Your body is causing negativity,” explains Pomerantz. Sexist rules also set a precedent for men, she adds. “It is offensive to men. It suggests they don’t have the ability to talk to a female student without going wild.”

Marci Kutzer, a fourth-grade teacher at Bertha Ronzone Elementary in Las Vegas, Nevada, says that, while school boards couch dress codes as preparing students for the workplace and adult life, their real purpose is to prevent “distractions.”

Kutzer says that sends a powerful message: "A boy's education can be compromised by your gender. Please do what you can to neutralize it." This clearly puts a burden on female students.

Another notorious dress code rule is the “finger-tip policy.” Female students must wear skirts or shorts that go past their fingertips. While this seems straightforward, students and parents report that for some, it’s impossible to find clothing that complies with the rule.

In Duval County, Florida, Nikki Belsham says that she’s been struggling with this rule since she was in school, and now her daughter is facing the same dilemma.

Shopping for her daughter is difficult; while Belsham can find appropriate clothing at the mall, it doesn’t pass the test. This is a common problem.

“Take a tall, skinny 12 year old girl—her shorts may not pass this finger length test and would be considered inappropriate for school, even though her butt is covered and the shorts are relatively long,” she explains.

Kutzer says that she will only “dress code” students if their clothing is clearly so tight it is uncomfortable. Her school follows “standard school attire,” (SSA) so students wear uniforms. On laundry day, however, some students show up without. Other student’s families can’t afford to keep up with their growing children, so their uniforms are ill-fitting.

“We are told by our administrators to send non-compliance issues to the office, but I only refer kids who are clearly wearing too tight or uncomfortable clothing, and I send them to the nurse, who keeps a stash of extra clothing for this type of situation,” explains Kutzer.

The high school attended by her daughter, however, uses a dress code policy rather than the SSA. Kutzer noticed that it essentially targets female and minority students—the focus being on on parts of the female anatomy, like backs, shoulders, and legs. 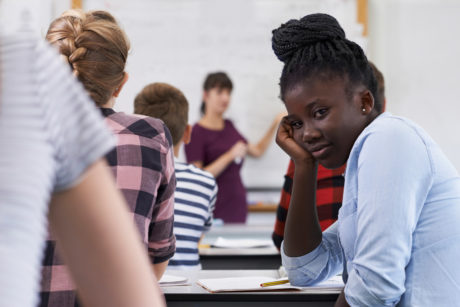 A 2018 study by the National Women's Law Center found that Black girls in District of Columbia schools are singled out by unfair dress codes, which, when enforced, can cause them to fall behind in school.

“Targeting styles of clothing that are mostly associated with a particular minority group is discriminatory. When styles such as ‘sagging pants’ are the issue, we are putting a burden predominantly on black males,” says Kutzer.

She calls this the “white male default,” a common trend for school dress codes. “Dressing as most white young men do seems to be what is encouraged.'

In 17-year-old Maddie Reeser’s Baltimore City public school, it’s the Black girls at her school who are the most frequently dress coded—a double discrimination. “My white friends rarely get sent to the office, but my Black friends do quite often,” says Reeser.

Another student said she brought up this issue to a male administrator, who told her it was “because white girls don’t have as much to show.” The student says this comment made her feel uncomfortable, let along failing to address the inequality.

Despite the fact that Reeser’s school has a uniform, she and her peers still faced the same issues that Belsham described at her Duval County school. “The rule should be based on the clothes, not how they fit, because it's different for each person,” says Belsham.

Despite the rules being the same for every girl, teachers end up enforcing the rules more strictly with Black females, and in a way that is humiliating.

Many dress codes can cause black students to fall behind academically, according to a 2018 National Women's Law Center study. Looking at public schools in the District of Columbia, the report found that three in four D.C. public high school dress codes say students can be pulled out of class or school for dress code violations.

“It’s outrageous that girls are losing critical class time simply for what they are wearing,” said NWLC Education Fellow and report co-author, Kayla Patrick. “This sends a disturbing message to all students: What a girl looks like is more important than what she learns and thinks. No girl should ever have to forfeit her education because her shirt is the wrong color or she has a hole in her jeans.”

East Longmeadow principal Flanagan said she’s tried to target inequalities at her own school by creating a gender-neutral dress code, and by involving students in the dress code process. “Instead of saying no low cut shirts or cleavage, the dress code says all private parts must be covered at all times,” she says.

Pomerantz recommends giving students lots of leeway to express themselves with fashion.  If something truly crosses the line, there’s a way to tell them, without enforcing victim-blaming.

“A question you can ask is ‘What is it about dressing this way that’s so important to you?’” Pomerantz recommends.

Many schools are looking into updating their dress code policies by making them more gender neutral, gathering student input and changing the wording—just taking the blame off females for “distracting” male students. Kutzer says the SSA at her school promotes equality fairly successfully—at least at the fourth-grade level. The districts hasn't yet introduced the SSA at the high school level.

“We want our kids to feel comfortable when they come to school,” says Flanagan. “Who knows? Five or ten years from now we may have to update again to fit the changing times.”