Where Do Teachers Get the Most Respect?

It's not in the United States, according to a new global survey. But signs are everwhere in 2018 that the public believes U.S. educators deserve better.

How educators are respected in relation to other professions can be a key marker in determining their overall status in an individual country. In China and Malaysia, the teaching profession is often placed on par with doctors. In Finland, the public aligns teaching with social work. Other countries rank teaching alongside librarians. These are just some of the findings in the 2018 Global Teacher Status Index, a worldwide survey of the general public and educators in 35 countries on the status of the teaching profession around the world.

How teachers were viewed relative to other occupations is one of four indicators the index uses to measure overall respect for the profession. The survey also looked at what teachers should be paid and whether parents encourage their children to enter the profession.

The researchers said 2018 data show a clear positive relationship between teacher status/respect and student achievement as measured by the Programme for International Student Assessment (PISA) scores.

Most countries surveyed recorded an increase in teacher respect for 2018 over the previous year, including the United States. The U.S. score was 39, which placed it 16th overall. 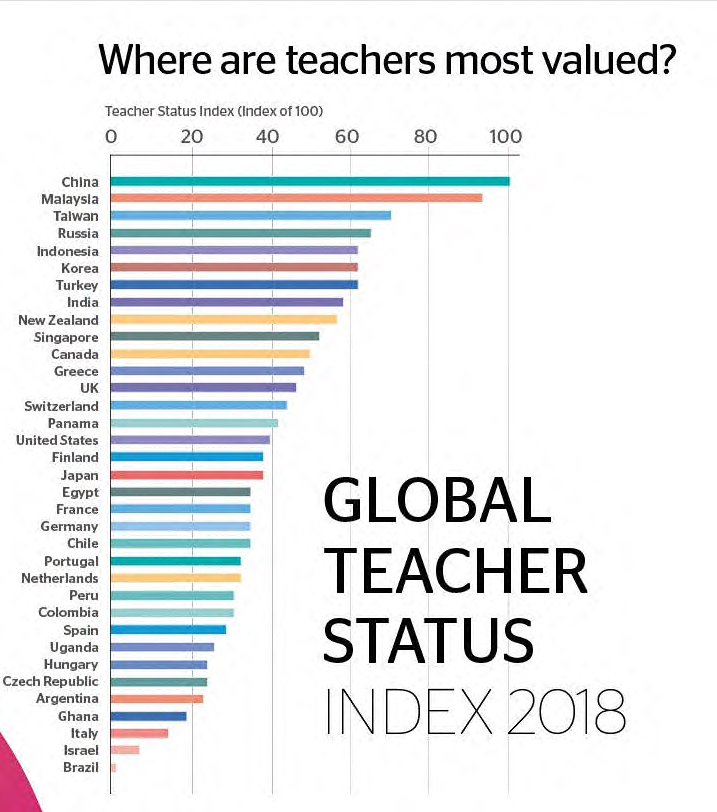 Most countries placed teaching on the same level as a social worker. The U.S. equated the role of teachers to that of librarians, although the educators in the survey chose local government manager.

"In the majority of countries, actual teacher wages were lower than what was perceived to be fair by respondents," the report says.

We find that there are major differences across countries in the way teachers are perceived by the public. This informs who decides to become a teacher in each country, how they are respected and how they are financially rewarded. This affects the kind of job they do in teaching our children, and ultimately how effective they are in getting the best from their pupils in terms of their learning." - Global Teacher Status Index 2018

The survey also found a clear correlation between the level of respect for teachers and the likelihood that parents encourage their child to enter the profession. This holds even when controlling for pay levels, suggesting that teacher salary has little impact on a parent's decision to encourage teaching.

In most countries, the public "systematically underestimates how much teachers work per week – often by more than 10 hours a week," according to the report.

Despite the lackluster overall score of the United States, it's evident from much of the data in the U.S. survey that respect for teachers - indeed, for the entire public education - is on the upswing.

Here are some of the highlights:

- Seventy-eight percent of respondents "instinctively view" teachers as influential, the fourth highest of all the countries surveyed after China, Ghana, and Indonesia.

- The U.S. public underestimates the number of hours teachers work, putting the figure at 45.02 hours – almost an entire school day less. Overall, U.S. teachers report they are working significantly longer hours than their colleagues in other countries.

-Support for merit pay has dropped dramatically. Half of U.S. respondents believe teachers should be paid according to the results of their pupils. That's down from 80 percent in 2013.

These results mirror what we've seen from other national surveys. The 2018 Phi Delta Kappan poll, for example, found that two-thirds of Americans believe teacher salaries are too low, and 73 percent of the public would support teachers in the own communities if they went on strike for higher pay - impressive numbers, bolstered by the #RedforEd movement that forced a national debate about public education priorities and helped elect pro-public education candidates across the country in the 2018 mid-term elections.

Reversing the chronic neglect of the nation's school system and the damage "blaming teachers first" has had on the profession may take a few years, but "the public is on our side," says NEA President Lily Eskelsen García.