Who is the Average U.S. Teacher?

A new federal survey asked U.S. teachers about their backgrounds, salaries, job satisfaction - and how much of their own money they spend on classroom supplies.

In 2016, the National Center for Education Statistics (NCES) polled 40,000 public school teachers across the country as part of the National Teacher and Principal Survey. The survey covers a wide range of topics about the teaching profession. The complete report will be issued later in the year, but some of the results from the survey are being released. Here are a few of the highlights so far.

The Teaching Force Is Still Predominantly Female and White

Despite the attention given to the need to recruit more teachers of color, little progress has been made in diversifying the profession. Overall, the percentage of White teachers has declined slightly from 84 percent in 1999-2000. In 2015–16, about 80 percent of public school teachers were White, 9 percent were Hispanic (an increase of 3 percent since 2000), 7 percent were Black, 2 percent were Asian, and 1 percent were of two or more races.

The Average Teacher Has 14 Years of Experience

In the 2015-16 school year, teachers in public schools had on average about 14 years of experience and worked roughly 53 hours a week. 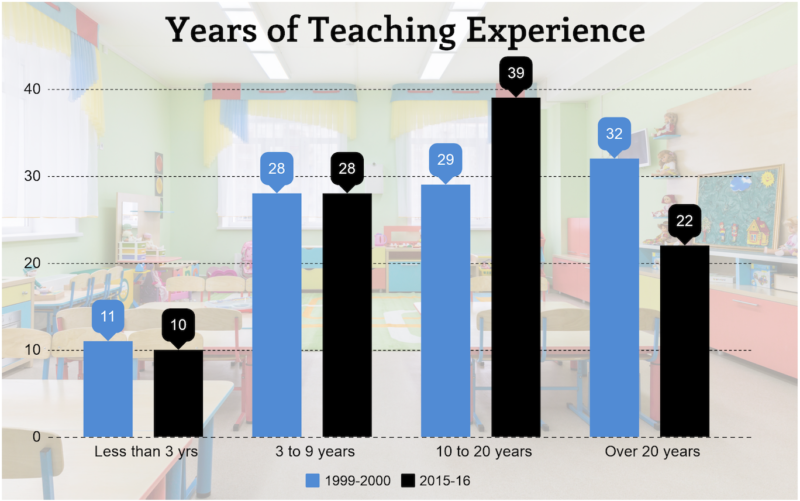 When asked to respond to various questions about their job, the data shows a clear correlation between satisfaction with salary and general job satisfaction. For example, if you are satisfied with your pay, you are more likely to believe that your school is run reasonably well and that you and your colleagues are a "satisfied group."

On the other hand, a higher percentage of teachers who were dissatisfied with their salary were more likely to believe that the "stress and disappointments involved in teaching at this school aren’t really worth it" and  "I don’t seem to have as much enthusiasm now as I did when I began teaching."

Still, research has shown that teacher job satisfaction generally depends on a variety of factors, including the availability of mentorship (crucial for newer educators), collaboration with colleagues, classroom autonomy, working conditions and support from the administration.

Teachers Spend Too Much of Their Own Money on Classroom Supplies

Overall, 94 percent of teachers spend their own money on classroom supplies. The average teacher spends $479 every year.