Who Stands Between Fake News and Students? Educators

"Digital natives" may be able to dart effortlessly between social media channels, but they need help evaluating the information they find there - and fast.

Every week, Dave Stuart hands out a current news article to his world history students so they can digest and evaluate the credibility of the information and its sources.  One day this fall, Stuart, now in his tenth year at Cedar Springs High School in Michigan, distributed a couple of stories about the 2016 presidential candidates.

In the middle of a uniquely controversial and divisive campaign, it was perhaps inevitable that during the discussion some students would dredge up information that didn't appear in the articles their teacher had provided. It was quickly apparent, says Stuart, that much of it was untrue and probably gleaned from dubious sources – or peddlers of what has now been famously dubbed “fake news.”

There’s nothing new about teenagers (or adults for that matter) finding unreliable or just plain false information on the Internet, but fake news –  bogus or exaggerated information disguised as reliable "journalism" and funneled primarily through Facebook – went viral in a big way in 2016. An analysis by Buzzfeed revealed that from August to November, the height of the presidential campaign, the level of engagement (likes, shares, etc.) for posts categorized as “fake news” outpaced that of stories from mainstream news outlets. 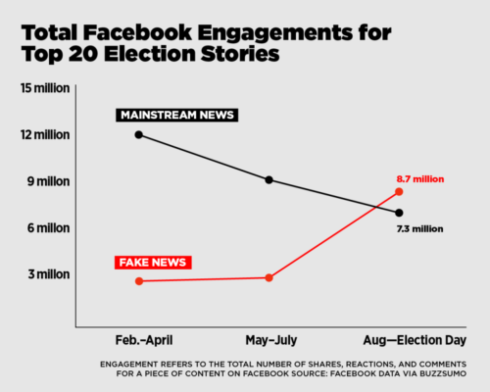 Because it was generated by the hyperpartisan climate of the 2016 election, addressing fake news in the classroom specifically could be dicey for educators if it is perceived that the purpose is to knock down or dismiss political opinions and candidates.

The conversation in Dave Stuart’s class, however, was focused more on  larger questions of how students as news consumers reach conclusions and how they can and should use evidence to support these conclusions.

“I don’t think my students are intentionally looking for conspiracy web sites or blatantly misleading information," Stuart explains. "So I would just redirect the discussion to questions about credibility without passing judgement. Is this source valid? Where is the evidence? The conversations were respectful and the kids handled it really well. Let them do the thinking."

Taking on "fake news" still comes down to media and digital literacy, which is taught in many schools but certainly not at the level needed to help neutralize the effects of false information that went viral.  Writing on his blog, Bill Ferriter, a teacher in North Carolina, believes focusing on the “new literacy” in the classroom will do more to curb the problem than waiting on Mark Zuckerberg to overhaul Facebook’s fact-checking procedures:

“We don’t need new policies and tools from tech companies to identify sketchy content on the web. Instead we need to develop citizens who take careful steps to verify that the information they are reading anywhere on the web is reliable. That’s the new literacy in today’s complicated media ecology – and it is the new literacy that we give too little attention to in schools.”

Schools are preparing a generation of bubble children without the immunities to deal with the information toxins that surround them. Quality information is to a thriving democracy what clean air and clear water are to public health" -  Prof. Sam Wineburg, Stanford University

Concord High School in Concord, New Hampshire, created its media literacy program in 1997 at the advent of the Internet and the looming explosion of digital content. The program took the subject off the sidelines and developed a required year-long course for 11th graders. While the recent election may have pushed fake news into the spotlight, and the program has evolved over the years to focus more on digital media, Concord High teachers haven’t lost sight of the core mission.

“We didn’t create the course twenty years ago to convince our students to believe what we believe is right,” explains Kaileen Chilauskas, chair of the school’s English department. “We created it so that students have the skills necessary to be confident and in control of their own beliefs, given the media saturated world they live in. We want them to be knowledgeable consumers, ones who are in control of the millions of messages they receive every day.”

Concord High’s nationally-recognized work in this area won’t be found in many other states. Most schools, according to Professor Sam Wineburg of the Stanford Graduate School of Education and founder of the Stanford History Education Group (SHEG), tend to “respond like ostriches.” If they don't ban the Internet altogether, they filter it beyond recognition.

“Schools are preparing a generation of bubble children without the immunities to deal with the information toxins that surround them,” he adds. “Quality information is to a thriving democracy what clean air and clear water are to public health. When information becomes polluted, our civic discourse is compromised.”

Long before the expression “fake news” entered the public consciousness, Wineburg and his colleagues at Stanford were already immersed in an 18-month-long study to evaluate students’ ability to accurately evaluate online information.

The results, says Wineburg, were bleak.

“Many people assume that because young people are fluent in social media they are equally perceptive about what they find there. Our work shows the opposite to be true.”

In total, the researchers collected and analyzed 7,804 student responses in 12 states. They tested students in low-income and affluent middle and high schools, as well as college students at six universities.

Regardless of their age or socioeconomic status, students across-the-board demonstrated a troubling inability to weed out unreliable information.

For example, the overwhelming majority of middle schoolers believed “sponsored content” was a legitimate news story and were unable to discern native ads from actual articles. When shown an image and caption that went viral on social media, high school students readily accepted the claim presented in the caption without offering any reservations about verification or attribution.

Most college students didn’t take note of any potential bias in a tweet by an political activist group, and when it came to identifying a reliable news source from an obvious fringe outlet, most students couldn’t tell any difference. 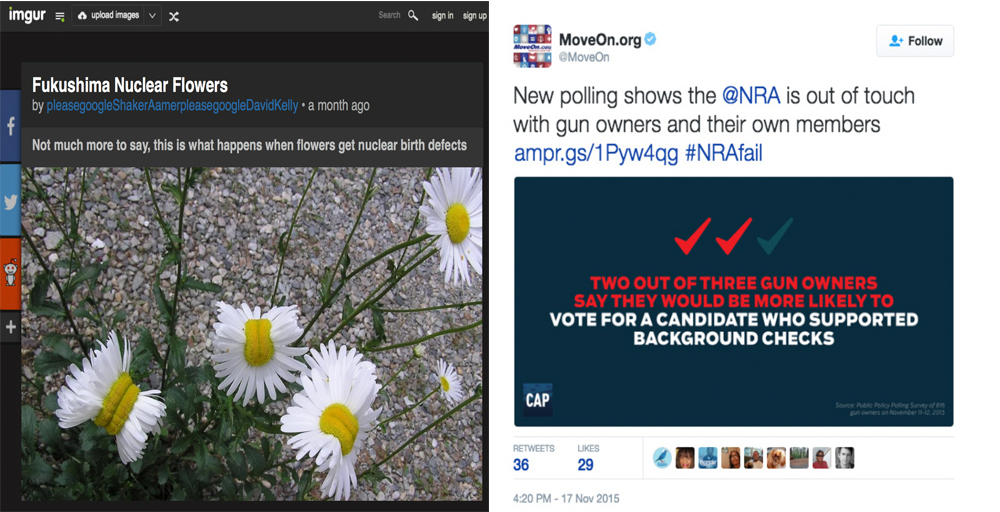 A 2016 Stanford University study found that students failed to question the validity of a photo caption (left) and point out potential bias in a tweet from an activist group.

While unsettling to say the least, the findings are unsurprising in many ways, because, as the researchers point out, schools haven’t really helped students think otherwise and help them become the fact-checkers they need to be.

Wineburg says the next steps to this research include developing curriculum to help educators track student understanding of online information and to adjust their instruction accordingly. The Stanford History Education Group has already begun to pilot lesson plans in high schools in California and a video exploring the link between digital literacy and civic, informed discourse may soon also be on the way.

What's important for educators to remember, says Dave Stuart, is that students' familiarity with digital technologies has no bearing on the fact that they need help in competently digesting information and reaching well-founded conclusions.

"Kids still need to read, write, think and speak critically. That doesn't come with being a digital native. Not at all."

And instilling these skills, Stuart adds, should be a responsibility of all educators across the curriculum.

"A student's ability to be more critical of the information they get online, to understand evidence, to identify inaccurate sources, affects practically every subject - English, Social Studies, Science, Health. This is a huge opportunity for all of us."