Why Are 19 States Still Allowing Corporal Punishment in Schools?

The practice is ineffective and damaging, but many states are holding on tight to corporal punishment. Some students more than others are paying the price. 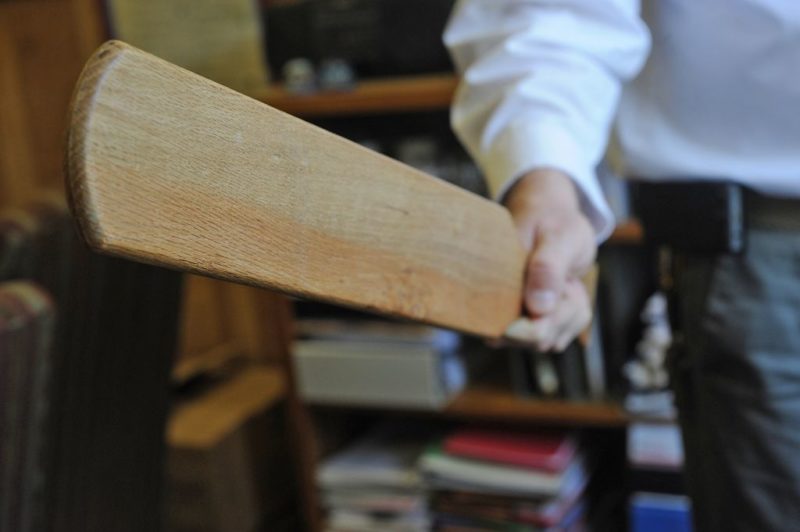 In 1977, the U.S. Supreme Court legitimized the use of corporal punishment in schools by deciding that the practice did not qualify as "cruel and unusual punishment." Despite the ruling in Ingraham v. Wright, corporal punishment - the use of physical force (usually paddling) on a student intended to correct misbehavior - would soon decline rapidly across the country. Between 1974 and 1994, 25 states would ban the practice, recognizing that it was an ineffective and inappropriate school discipline measure.

Since the mid-1990s, however, only five more states have joined those ranks, leaving 19 states that currently sanction the use of corporal punishment in schools.

Despite being on the books in these states, is corporal punishment more policy than practice, existing merely in a school handbook but widely ignored?

Unfortunately, quite the opposite. States that have it, use it, some more than others. During the 2011-212 school year, 163,000 schoolchildren were subject to corporal punishment.

The widespread use probably comes as a surprise to many people, says Dr. Elizabeth Gershoff, a developmental psychologist at the University of Texas at Austin.

Gershoff, along with Sarah Font, assistant professor of psychology at Pennsylvania State University, recently analyzed data from the U.S. Department of Education Civil Rights Office to pinpoint the prevalence of corporal punishment in schools and presented their findings in a report published by the Society for Research in Child Development.

Most alarming are the blaring racial disparities in how this punishment is meted out. Students of color, predominantly African American boys, are on the receiving end of a paddle significantly more often than their white counterparts.

"Most people assume that corporal punishment has already been abolished across the U.S. Even people in states where it is legal do not always know it is so," explains Gershoff.  "We know that it is increasingly being used only in rural areas, which means fewer children and families have experience with it, and that may have contributed to its falling from view."

Corporal punishment is concentrated in southern states and, to a lesser extent, in some states out west. More than half the school districts in Mississippi, Arkansas, and Alabama, use corporal punishment, a level that surprised Gershoff.

"I had assumed it would be only a few pockets of districts still using corporal punishment within each state, but the district-level data we analyzed made clear that the practice is much more widespread in some states than I expected."

Most alarming are the blaring racial disparities in how this punishment is meted out. Students of color, predominantly African American boys, are on the receiving end of a paddle significantly more often than their white counterparts. In Mississippi and Alabama, Black students are 51% more likely to be hit than White students in more than half of those state's districts. In one-fifth of districts, that likelihood soars to 500%.

This is a disparity that cannot be explained away by Black students attending schools more likely to use the punishment  - because they don't. Across the South, White students are more likely to attend these schools, according to the report. 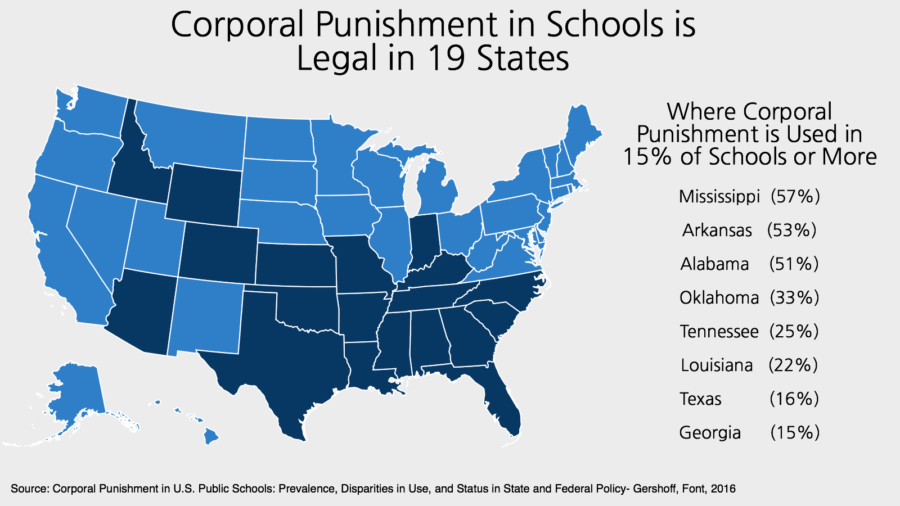 Children with disabilities are also at greater risk. These students are more than 50% more likely to be subjected to corporal punishment than their counterparts without disabilities in 67% of districts in Alabama, 44% in Arkansas, 46% in Mississippi, and 36% in Tennessee.

"The extent of the disparities by gender, race, and particularly disability status were quite surprising and very troubling," says Gerhoff.

And all for a practice that, according to research, is not only counterproductive from a classroom discipline standpoint, but is also potentially very damaging - psychologically and physically - to students. (The National Education Association is opposed to corporal punishment, calling it "ineffective" and "harmful.")

Yet, there it is, in 19 states being used fairly regularly in many districts. It's fair to ask: What is going on?

Obviously, administrators permit corporal punishment in schools because they think it is effective. They do this without hard evidence, says Gershoff. "It's just based on gut feeling and their own observations."

For many, the appeal of corporal punishment is that it almost always gets a reaction from children, which sends an immediate signal to parents or educators that they were able to get their point across.

"Unfortunately, what the adult cannot see is that either the child did not internalize how they should behave in the future, or they are resentful of being physically harmed and emotionally shamed, and days or weeks later they repeat or even escalate their misbehavior," adds Gershoff.

Unfortunately, what the adult cannot see is that either the child did not internalize how they should behave in the future, or they are resentful of being physically harmed and emotionally shamed, and days or weeks later they repeat or even escalate their misbehavior" - Dr. Elizabeth Gershoff, University of Texas

Furthermore, corporal punishment often isn't the "last resort" when all other actions to curb serious misbehavior have failed. The available data makes it clear that, yes, students get paddled for offenses such as drunknessness, fighting, and bullying. But many are subject to being hit for minor violations such as cell phone use, inapproprate language, running in hallways, sleeping in class - even failing to turn in homework.

As Gershoff and Font point out, in most states - including those that allow the practice - corporal punishment is banned in many publicly-funded settings that care for children, including child care centers and juvenile detention facilities. (Not to mention the fact that the practice is considered a human rights violation in accordance with the U.S. Treaty on the Rights of the Child.) But this concern does not extent to kids in public schools, at least in more than one-third of the country.

Gershoff believes a national ban on corporal punishment in all schools would be the most comprehensive approach to ending the practice, but because it would have to move through the U.S. Congress, passing such legislation presents an enormously formidable challenge. Similarly, there has been very few recent attempts in any of the 19 states to institute a ban. Overturn Ingraham v. Wright in the Supreme Court? Maybe, but no case dealing with corporal punishment has made it the Court since that 1977 decision.

Still, all options are possible and realistic, depending on how aware individuals and communities are that corporal punishment is being widely and unfairly used and often at shocking and disturbing levels.

"We have to continue to call attention to this and encourage both state and federal governments re-examine whether this is how we want to continue treating children in our public schools," says Gershoff.