Why Is Florida Faculty Unionizing In Overdrive?

Six new faculty unions have organized since 2016 in Florida. All are motivated by a desire for a strong, collective voice on their campuses. 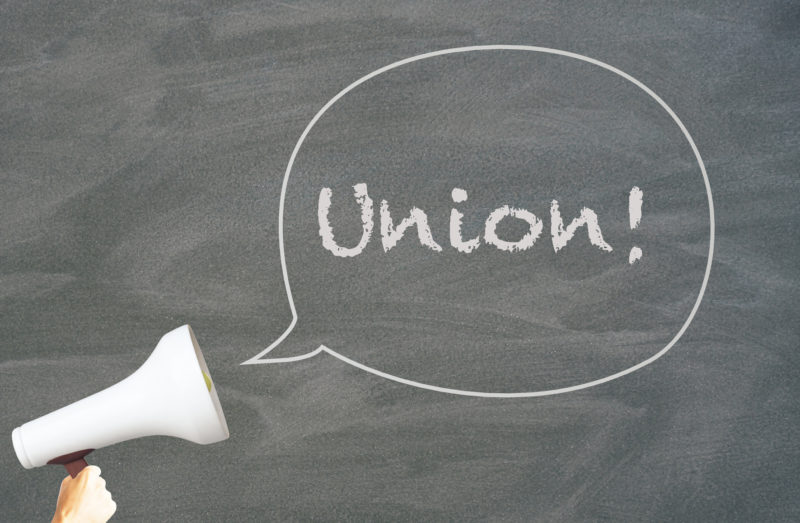 While the issues on each campus may differ, and the relationships between local faculty and different boards and presidents may range, the new NEA Higher Ed members share a common purpose. It’s about having a powerful, collective voice so that they can share in the governance of their colleges or universities, and protect the quality of education in their classrooms and across Florida.

“I think they were fed up with being disrespected, of having no voice, of having rugs pulled out from under them, and not feeling like they could do anything about it,” said United Faculty of Florida (UFF) President Karen Morian, a professor at Florida State College in Jacksonville. “Then they realized there was something they could do about it!”

In February, faculty at St. John’s River State College (SJRSC) became the 31st chapter of UFF, which is part of the Florida Education Association. Their 83-27 vote was certified Tuesday by the state’s public employee commission.

“The big thing for us is transparency. That’s an issue that really moved a lot of people,” said Jay Maggio, co-chair of the organizing committee at SJRSC.

Unlike on some other campuses, SJRSC faculty don’t have huge grievances with management, he said. There wasn’t a sudden increase in workload, or new attacks on job security. “For us, it’s about shared governance. The people who voted for the union want a say in governance, not just rule by fiat,” said Maggio.

They're not the only ones: “We want a say in the policies that affect our employment,” Pasco-Hernando State College (PHSC) associate professor Caitlin Gille told the Tampa Bay Times during their successful unionization drive in 2017.

Since 2016, UFF has grown from 25 to 31 chapters, including all 12 state universities, 14 state colleges and community colleges, one private college, and a handful of graduate-assistant chapters. In October, by a vote of 62-6, faculty at Lake-Sumter State College became the 30th chapter; they were preceded by faculty at PHSC, Tallahassee Community College (TCC), State College of Florida, Manatee-Sarasota (SCFMS), and Florida Polytechnic University.

In every place, local faculty reached out to UFF for help in starting a union chapter. “We’re not going to them. They’re coming to us,” says Morian. “We’re saying, ‘get 10 people in a room and we’ll come talk to you about how to do it.’”

Although these are locally driven campaigns, there are statewide higher-education issues in Florida that have made it more difficult for faculty to do the job of educating students. In recent years, legislators have acted to:

At Tallahassee Community College (TCC), where the faculty union was certified in August 2016, sudden changes to workload were an organizing issue, said UFF-TCC Vice President Martin Balinsky. “They came out one day and said they were making drastic changes to workload...and I don’t think they anticipated our reaction. Basically the provost said we’d get over it,” he said. “Instead, within three months we had launched our union cards, and within four months we were unionized—with an 87 percent vote.”

Workload gets to the heart of faculty’s ability to teach students effectively—and faculty want a say in what works best for teachers and students, said Balinsky. Without a union, their voices were ignored. “We had a faculty senate previously, and I was the faculty senate chair for a number of years,” Balinsky said. “We noticed that, while it made us feel good to get together and write resolutions, and we met monthly with the president and provost, they ultimately dismissed everything we said that was substantive.”

In other words, there is no substitute for a legally binding, collectively bargained contract, they found.

At other campuses, faculty retention has been an issue. At State College of Florida, Manatee-Sarasota, the college did away with continuing contracts in 2015, and the faculty organized by a vote of 75-24 in 2016.

“We have asked to be heard, to be taken seriously, to be respected by our Board of Trustees and administration and have been met with silence,” English professor and union organizer Courtney Ruffner told a local newspaper. “It is clear we all want to better the working and learning environment for faculty, students, and our community at large. Our union with the United Faculty of Florida can help us achieve that desire.”

Meanwhile, at Florida Poly, the issues have been numerous—but an administration that simply does not listen to faculty when it comes to issues of student well-being may be at the top of the list.