6 reasons we must address our nation’s crumbling school buildings

America’s public schools are one of the largest sectors of our nation’s infrastructure, second only to roads and highways. 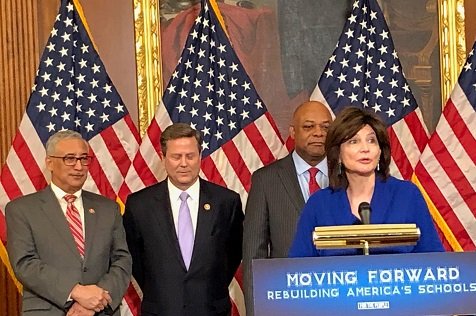 Too many students and educators across the country learn and work in crumbling schools.

In California, one teacher reported that students are instructed to run the water for one minute before drinking to prevent lead contamination. In one Idaho school, educators see mice come in each winter and water seeps in when it rains. Similar problems exist in every state and every congressional district.

America’s public schools are one of the largest sectors of our nation’s infrastructure, second only to roads and highways. We need to invest in school modernization as a crucial part of any major infrastructure push. Speaker Nancy Pelosi (D-CA) has pointedly said that schools will be addressed by House Democrats this year. What form that takes is still unknown.

“For far too long, we have chronically underfunded our schools. And as a result, many educators and students are stuck with facing unwelcoming to even hazardous learning environments. On a daily basis, these public schools face numerous infrastructure challenges, ranging from moldy ceiling tiles to inoperable heating and cooling systems. And that is in the most minor circumstances,” said NEA President Lily Eskelsen at a House Education and Labor Committee press conference on March 3, 2020.

Educators are embracing a plan by House and Senate Democrats to invest more than $100 billion in America’s public schools. The Rebuild America’s Schools Act would fund $70 billion in grants and $30 billion in bonds to help states address critical physical and digital infrastructure needs. The act is an important step in securing safe, high-quality public schools for every student.

Here are six reasons schools should be included in the upcoming infrastructure legislation:

1. Half of America’s public schools are more than 50 years old

2. Students in some rural areas are without internet connection

3. Our most vulnerable students are hurt the most

A 2006 Building Education Success Together report found that high-poverty and minority-serving schools are unable to adequately invest in school facilities. These school facilities have time and time again failed to serve students by providing poor breathing conditions. According to a 2014 CDC survey, only 46.5% of schools have a program in place today to address indoor air quality issues, and the GAO found that over 15,000 schools were circulating air unfit to breathe. Additionally, schools predominantly serving white students spend nearly 50% more on capital construction than those serving minority students, and wealthy districts spend nearly triple their high-poverty counterparts. A 1996 GAO Report—the most recent GAO study on this issue—determined that poor school facility conditions were concentrated in high-poverty schools serving minority students.

4. Poor conditions force teachers out of the profession

Not only do students suffer when learning in underfunded school facilities, so do educators. Based on an Economic Policy Institute analysis, every $1 billion spent on construction creates 17,785 jobs. The U.S. Department of Education estimates that it would cost about $4.5 million per school — a total of $197 billion — to make the repairs and renovations necessary to ensure that all our public schools are in good condition. By leveraging federal, state, and local resources, over 1.9 million jobs could be created in the education sector alone. Investing in school infrastructure is investing in education and the economy.

While some school districts allow parent groups to raise money to supplement local and federal funding, others cannot afford to or are strictly prohibited. Students and educators need support through innovative solutions, especially with increased disparities between wealthier schools and classrooms in poorer areas. One NEA-endorsed suggestion is to restore the Quality Zone Academy Bonds (QZABs), which the Republican Tax Deal eliminated, and permanently increases the national limit from $400 million to $1.4 billion per year. QZABs allow qualifying schools to finance renovations, repairs, and investments in technology at below-market rates — sometimes, as low as zero. School districts pay back the amount of money borrowed initially, but do not have to pay any interest — typically, about half the cost of renovating a school.

6. Children are exposed to toxic elements