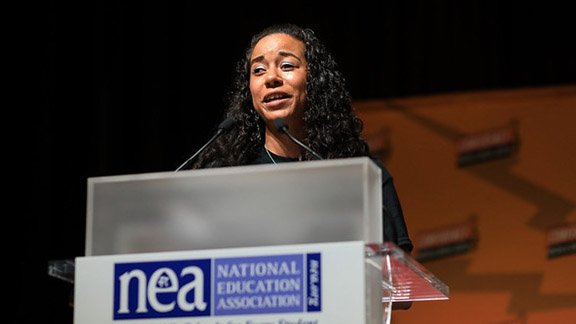 Marshall-Allen is the program director for intensive needs inclusion and community-based instruction in Homer, Alaska. She is passionate about Native and ethnic student needs, cultural preservation, and the inclusion of students with special education needs in public school settings.

“Amplifying other people’s voices and other people’s needs has lasting effects beyond somebody else’s negativity,” said Marshall-Allen on why receiving the honor is meaningful to her.

“Educators are our best advocates for building inclusive, productive communities that value all individuals for their unique contributions,” she said.

Marshall-Allen was nominated for her advocacy on behalf of special needs students as well as her role in organizing Red For Ed rallies.

She is a local area representative for an upcoming strike in her district. The work stoppage will protest the district’s high teacher turnover rate. She says the education system in Alaska is under attack.

“You’re looking at $22,000 to $27,000 that each district is spending each year on every new teacher that they have to bring in,” said Marshall-Allen, referring to the added costs associated with hiring new employees. “It’s not cost effective to have this kind of destructive cycle that provides no security for the students we’re going to serve,” she said.

For Marshall-Allen, activism includes everything from intimate conversations with family members to lobbying legislators.

Since she began teaching in 2009 at Muskogee High School in Oklahoma, Marshall-Allen has spoken up for student needs to state and federal elected officials. She has traveled to Washington, D.C., over the past two years to discuss Indian education, DACA, the rights of special needs students, and education funding with Alaska’s senators.

At the core of great advocacy work, she says, are personal stories.

“Providing a space for empathy allows individuals to advocate calmly, in a manner that is more effective than being aggressive,” said Marshall-Allen.

“If we don’t share our stories and we don’t take time to listen to other peoples’ stories, we will continue to live in a world that is very limited in knowledge and understanding,” she said. “Our world will lack the richness that being inclusive and culturally sensitive can afford us all.”

Marshall-Allen recognizes the work of past social justice and civil rights activists as critical to her own education and opportunity to become an educator. As a partially sighted individual, she had an Individualized Education Plan for visual impairment when she was in school, thanks to the Americans with Disabilities Act.

Now, she wants to serve as a role model for her students, who she says can also play a huge role in movement building. Because of the social media tools her students use to connect with their peers, she says they are able to make an impact far beyond anything she imagined when she graduated from high school.

Learn more about Winter Marshall-Allen and this year’s other inspiring finalists.