2022 Teacher of the Year’s Message to NEA Delegates: Have Hope

"Because of your commitment, brighter days are on the horizon," says Ohio history teacher Kurt Russell in his address to educators at NEA's Representative Assembly. 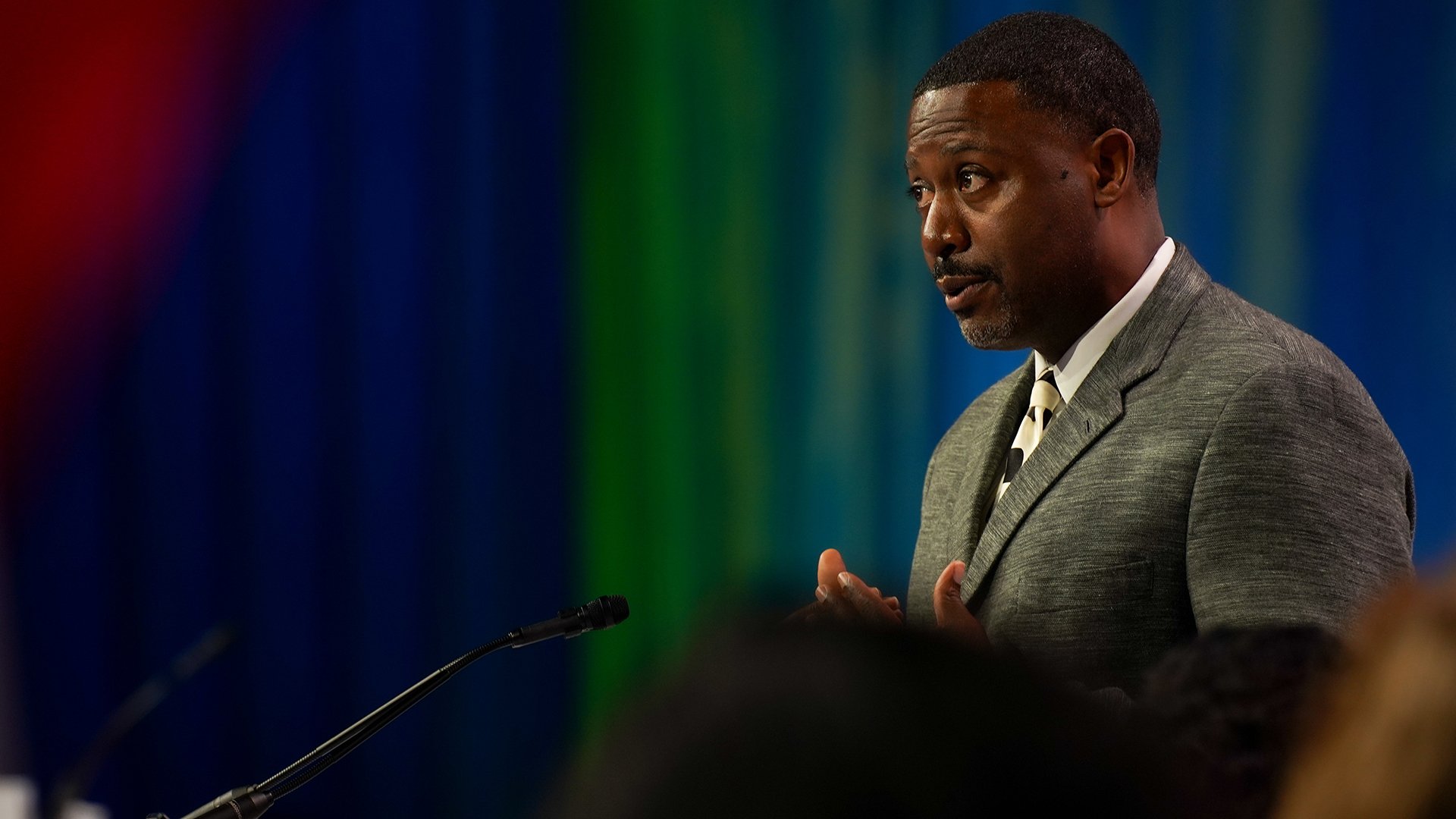 "Because of your commitment, brighter days are on the horizon," Ohio history teacher and 2022 National Teacher of the Year Kurt Russell said in his address.
By: Cindy Long, Senior Writer
Share

After an unprecedented period of stress and turmoil for American educators, some struggle to hold on to hope. But that’s exactly what educators must do, said 2022 National Teacher of the Year Kurt Russell in an inspiring address to delegates at NEA’s Representative Assembly in Chicago.

After a rash of horrific mass shootings, including the tragic loss of young, innocent lives in Uvalde, Texas, Russell said he, like so many others, experienced feelings of sadness and depression. He was left wondering: how can we protect our students and teachers?

But he refused to remain in a state of despair. Inspired by the words on a T-shirt a friend gave him, he shared those same words in a social media post: “I still have hope.”

That is the work of an educator, he said, adding that education is a profession that understands potential in students, schools, and entire communities.

A popular history teacher who brings cultural relevance to all his lessons, Kurt Russell is a strong advocate for students as advisor to the Black Student Union (BSU) and as head coach of Oberlin High School’s varsity basketball team.

“For 25 years, like so many educators, I have invested time and energy into creating a conducive learning environment for students,” he said. “I am that teacher who comes in early to prepare, who attends sporting events for my students, and advises clubs and activities to ensure students have a worthwhile school experience.”

A good school experience requires teachers to make sure students feel a sense of belonging, that they are invested in their schools and learning, and that they are socially and emotionally well.

It is just as important, Russell said, that teachers feel supported and protected.

“For over 150 years NEA has been persistent in making sure teachers are supported,” he said. “With an increase of rhetoric such as critical race theory and book bannings, it has been NEA who fervently stood up against these attacks. I am able to soar because of the confidence I have in NEA. NEA assures and treats me like the professional that I am, allowing me to be the expert in the classroom.”

In the classroom as a history teacher, Russell lays the groundwork for diverse learning. He tells stories of marginalized groups and leaders who students can relate to and be inspired by.

Stories like that of Alice Paul, a suffragist in the early 20th century who demanded women receive the right to vote. This inspired his student Rylee, a senior, to pursue a career in advocating for equal rights for all.

Or the story of Cesar Chavez, a Filipino agricultural worker who organized a farmers’ union. This inspired his student Ella, a first-generation American, to pursue a career in bilingual studies.

Stories about redlining, which segregated communities, prompted Caleb to pursue a career in urban studies.

“These examples validate the importance of a diverse curriculum, a curriculum that NEA publicly acknowledges as being vital and impactful to the 21st -century learner,” said Russell.

Russell acknowledged that some believe advocating for teachers’ rights means going against students’ needs. He knows there is a persistent mindset that when educators bargain for more pay or better healthcare they are being selfish, a mindset contrary to the basic principles of education, which is to provide for children.

“I think otherwise,” he said. “The foundation of our education system is predicated on the well-being of teachers. If teachers are fully supported and treated as experts in the classroom, the reward is astonishing. More young, bright students will gravitate towards the teaching profession, bringing new ideas, excitement, and passion.”

Russell shared the example of another one of his students, Sarah, who was a 2017 graduate of Oberlin High School. After completing her studies at Kent State and majoring in elementary education, Sarah accepted a fifth-grade teaching position at Oberlin Elementary School.

When asked why Oberlin, Sarah said she was attracted by a school where educators were heard and respected.

“This is the strength of NEA—fighting and pushing for fair contracts and compensation to recruit the best individuals into the profession,” said Russell.

He thanked NEA for its hard work and diligence in promoting a more diverse teaching force, for recognizing the benefit of having more women teachers in STEM, more men teachers in the primary years, and more teachers of color who will continue to empower our students.

“Thank you, students, families, education support professionals, and NEA for providing hope and inspiration,” he said. “Because of your commitment, brighter days are on the horizon. There’s greatness in all of us.”